When Papiss Cisse stepped around a sprawling Pepe Reina to slot Newcastle's second goal home on Sunday, a few things seemed clear. First and foremost, it seemed clear that the Newcastle striker had been offside. Beyond that, though, the obvious culprit seemed to be Jon Flanagan's whiffed clearance, while around him Liverpool's entire defence seemed a complete mess. However, as is often the case when things go wrong in defence, the real problem started up the field: 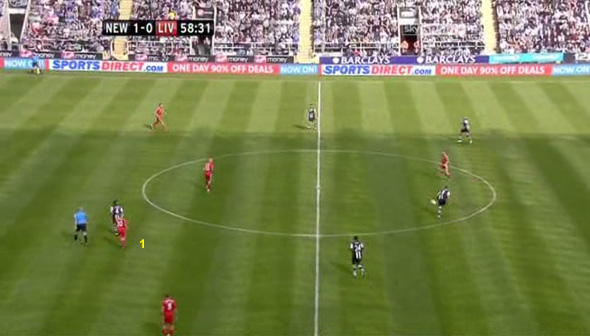 As Newcastle begin their attack, Jay Spearing in the defensive midfielder role is tracking Yohan Cabaye (1). Cabaye has been roaming between Liverpool's midfield and defensive lines all day, with the majority of their most dangerous attacks moving through him. 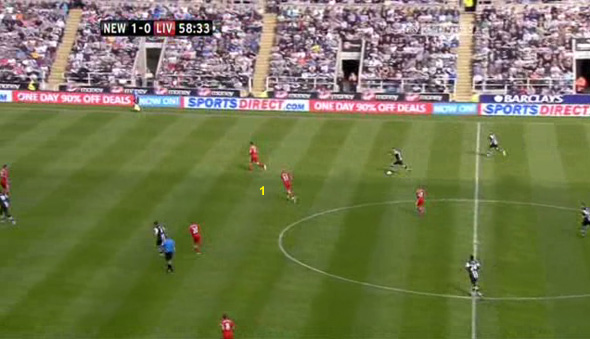 Ben Arfa receives the ball to Liverpool's left, with Enrique and Shelvey (1) blocking any immediate route to goal. 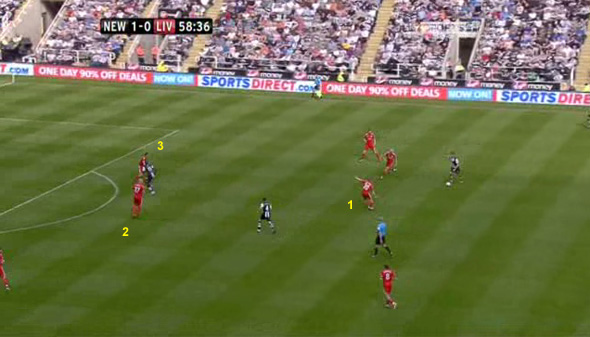 As Ben Arfa cuts inside, Spearing (1) inexplicably hands his man off to Skrtel (2) and moves to assist Shelvey. With Ba occupying Carragher (3) and Cisse covered by Flanagan (out of frame), this leaves three defenders to cover Newcastle's three most advanced attackers. 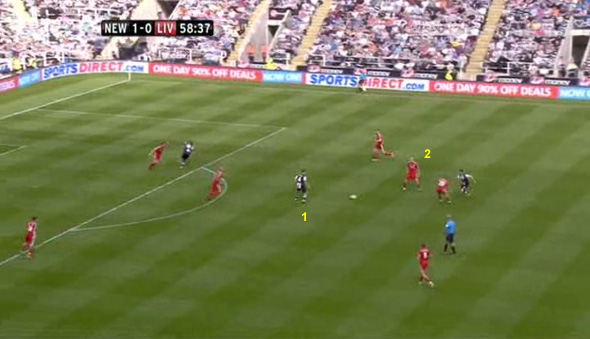 Ben Arfa now slips the ball in to an uncovered Cabaye (1), with Skrtel moving to close him down while Shelvey (2) is indecisive, unsure if he should stick with his man or chase after the ball having had Spearing jump in front of him a split second earlier. 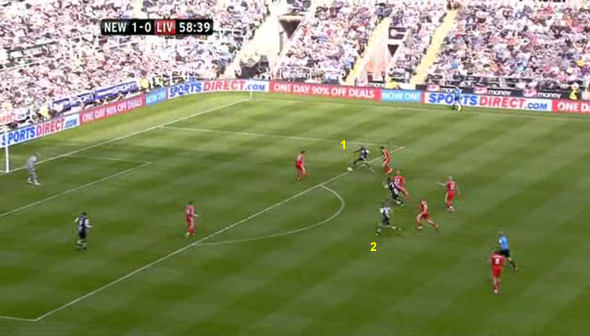 Cabaye slides it cooly through to Ba (1) and turns past Skrtel, the defender now caught flat-footed after charging to close him down. Meanwhile neither Shelvey nor Spearing have kept up with Ben Arfa (2). Liverpool now have two defenders facing up to four attackers. 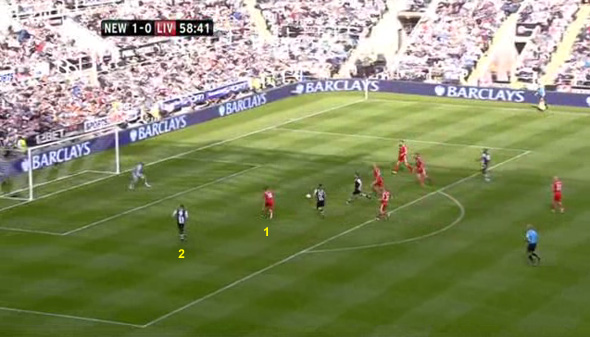 Ba plays the ball past Carragher and into space, leaving Flanagan (1) to make a desperate lunge for the ball while three attackers close in. He mistimes his slide and the ball slips through to Cisse (2). Despite being in a clear offside position, the linesman's flag stays down and he cooly steps around Reina and puts the ball into the net.

In the end, the final mistake belongs to either Jon Flanagan or the assistant referee. The flag clearly should have gone up, while Flanagan should have been able to make contact with a ball that crossed his path rather than managing to sail over it in rather unlikely fashion. Still, Newcastle's attack never should have reached the point where a poor decision by a linesman or a mis-timed lunge could be the deciding factor.

At its root, the real culprit in Liverpool's complete defensive breakdown was Jay Spearing. Often when looking at goals there can be seen a series of minor defensive errors all conspiring to lead to concession. One player makes a small mistake so that another makes a poor read so that a third is left with two sub-par options and then the ball is in the back of the net. This time around that isn't the case.

This time around it's almost all on Jay Spearing, who instead of sticking to either his man or looking to cover the gap between midfield and defence as was his job went chasing after the ball like a kid kicking about with friends in the park. At times he's been talked of as having a terrier's mentality, and it's often meant as a compliment, but on Sunday his decision to chase after an already covered Ben Arfa was the clear moment when Liverpool's defensive breakdown began. It was thoroughly indisciplined and, given Ben Arfa posed no goal threat at the time, entirely unnecessary.

Elsewhere, Jonjo Shelvey stopped tracking Ben Arfa's run, but he had little choice in the matter once Spearing stepped in front of him. A more experienced player might have then moved to close down Cabaye, perhaps depriving the Newcastle player of the time needed to slip the ball to Ba, but it isn't a split second decision Shelvey should have been forced to make.

Similarly it's hard to blame Skrtel for closing down the man Spearing handed off to him. He didn't reach Cabaye in time, something which left him in a poor position to recover when the ball was played in, but he had little choice but to charge out in the first place.

In the end, others might have done things slightly differently to make up for Spearing's error. And clearly the linesman should have bailed Liverpool out by making the clear offside call. Still, any defensive midfielder in the Premier League has to be able to get that decision right; Spearing got it wrong. Any chance of Liverpool coming back in the game ended when he did.