Liverpool ease past Norwich at Carrow Road on a day that saw Luis Suarez at his brilliant best, capping a terrific performance with an audacious fifty-yard lob for his hat-trick that left even the shameful home supporters stunned. The day started slowly and had its fair share of sloppy play, but the class of the Uruguayan shone through in a display that sparkled among a team performance that continued many of the improvements from last weekend despite a number of changes.

There were five new faces in total, one of which was met with plenty of grumbling by most, present company included---Martin Skrtel was rested, which made enough sense with a packed schedule this week, but that it was Jamie Carragher coming in rather than Sebastian Coates proved maddening, as it gave Kenny Dalglish a chance to address whatever worries were present about the lack of time for the young defender. Also featuring were Jonjo Shelvey, Stewart Downing, Craig Bellamy, and Steven Gerrard, in a formation that saw Suarez ostensibly on his own up front.

For the opening twenty minutes pretty much anyone in attack was isolated, as sides traded possession without really creating any chances. A switch between Shelvey and Gerrard gave Liverpool more support going forward, however, and in his first invovlement higher up the pitch, the captain nicked possession and played Suarez in on goal in one flowing movement, and a short touch gave the forward the space to blast a left-footed effort past a helpless John Ruddy at the far post.

It went from nothing to something very quickly, and before the match could settle back into any sort of flow Suarez again beat Ruddy, this time after doing the work to gain possession on his own. He streaked down the right alone, and after glancing for support that never arrived, he opted to hit it from just instead the Norwich penalty box. It was perfectly-struck and again left Ruddy with no chance as it ducked into the side netting.

Two goals from three chances was an unmatched return for Liverpool this season, and they saw out the first half comfortably, with the hosts rarely piecing together anything in the opposition half. They finally forced Reina into a save within ten minutes of the restart, and they began to test the Liverpool defense as the half wore on. Liverpool weren't entirely on the back foot, though, as Jonjo Shelvey hit the crossbar with a headed effort and later missed a difficult chance from a few feet after Jose Enrique sliced a low cross in from the left. 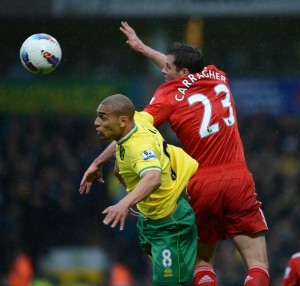 Suarez looked to have wasted his chance at a hat-trick on 64 minutes when he chose to try to lob Ruddy, and the guests spoiled a number of counters, more than a few of which saw a wasteful Stewart Downing as the culprit. But in the 82nd minute Suarez put the match to bed with a stunning lob of Ruddy from just inside the Norwich half, opting to ignore a furious Steven Gerrard on the far side to loft it over the Norwich keeper for what has to be the goal of the season. Job done and, most importantly, chances taken.

The magic of Luis Suarez will rightly take all the headlines, as he took the match over and gave the Norwich defense an absolutely torrid time. Little coincidence that he sparkled when more directly supported by Steven Gerrard, and that he scored each time without having to do much creating was a testament to the effort of the captain and a more dynamic midfield duo that were more than capable both going forward and when tasked with supporting the largely untested back line.

I mentioned above that it was disappointing to see Jamie Carragher picked ahead of Sebastian Coates, and I stand by that opinion despite a very good effort from the aging defender. He was slow and out of place for much of the opening but found his footing late, and managed to make a number of fine blocks and clearing headers. That he was serviceable today shouldn't be used as justification for future omissions of Coates (even though it will be), who's more promising, more talented, and even at his young age reads the match much better than Carragher.

As noted already, Jordan Henderson and Jonjo Shelvey carried the banner well for the squad's younger talent, though, as they were excellent in central midfield and rarely left Liverpool overrun in the middle of the park. Craig Bellamy flanked them well and worked from start to finish on the left, although his level of effectiveness wasn't even close to being matched by Stewart Downing on the right, who was anonymous in the first half and wasteful in the second. If today was a trail run for next Saturday, there can be little argument that Dirk Kuyt or Maxi Rodriguez is better suited to a start.

It wasn't a perfect display by any stretch, and the failings of Norwich allowed Liverpool's lackadaisical spells to be more of a sidenote than anything else. At times it was ugly both on and off the pitch, with Liverpool again hitting the bar and wasting possession in attack, and the home crowd proving more vindictive and ugly than actually interested in the match. This is one that Liverpool could have easily drawn, with the margins between an easy victory and a frustrating draw all to be found in the finishing.

Thankfully Luis Suarez provided that today, and we're left celebrating a comfortable win for Liverpool heading into a huge week.