The Club That Cried Luck

Share All sharing options for: The Club That Cried Luck

Sometimes luck can be a too easy excuse. Sometimes bad bounces can be used as cover for deeper failings. And sometimes, rather like with the boy who cried wolf, an over-reliance on using luck as a convenient crutch can make it so that when the breaks really do fall entirely in the wrong direction nobody is especially interested in hearing about how with a bounce here and an inch there and a different referee on a different day everything would have worked out.

Because sometimes the tactics actually can be right, and the team selection can be spot on, and the players can work as hard could be hoped for. And yet even then, sometimes the better team simply doesn't win. Sometimes, across a long season, the better side will find themselves unfairly punished by the final score.

Of course, even at the best of times many will be loathe to accept a kind of fatalistic shrugging of the shoulders in response to a poor result. During a campaign when luck and bounces and officiating has at times been an easy excuse to avoid talking about real problems, then, even fewer will want to hear it. But that doesn't make it any less true: On Sunday against West Bromwich Albion Kenny Dalglish picked the right team, gave them the right tactics, and the players went and put on an inspired performance. Or at least they did for the first seventy-five minutes, until an undeserved lead by their opponents broke a Liverpool side frustrated by a disappointing league campaign and with nothing else to play for in it between now and May 13.

Up to that point, though, it was exactly the sort of lineup many had long hoped for utilising the kind of tactics most had wished for with the players putting in an energetic performance the likes of which had been largely lacking since the start of the new year. Dirk Kuyt and Maxi Rodriguez were effective on the wings; Jordan Henderson was key to Liverpool dominating possession; and Luis Suarez may have had his best game since returning from suspension. For once, Liverpool seemed to get everything right, and until the ongoing finishing troubles began to weigh on those watching the result was perhaps the most entertaining and just plain fun Liverpool game seen in nearly a year.

In the context of the season it might be another disappointing loss. And in the context of the season, the word "luck" may have at this point deservedly developed into something of an unpalatable curse. Still, though it might be impossible to fully separate Sunday's loss from all that has come before, it would be wrong to let what has come before completely overshadow the fact that against West Brom Liverpool played a very, very good game of football, and that on almost any other afternoon it would have led to them taking three points.

There have been many times Liverpool—it's players and coaching staff and upper management all—have gotten things wrong this year. On Sunday, they got almost everything right—and in numbers like 63% possession, almost twice as many completed passes, five times the crosses, and over four times as many goal scoring chances it clearly shows. It doesn't somehow make right all the things that have gone wrong, but maybe for one game it wouldn't be unfair to suggest Liverpool really were the victims of luck. 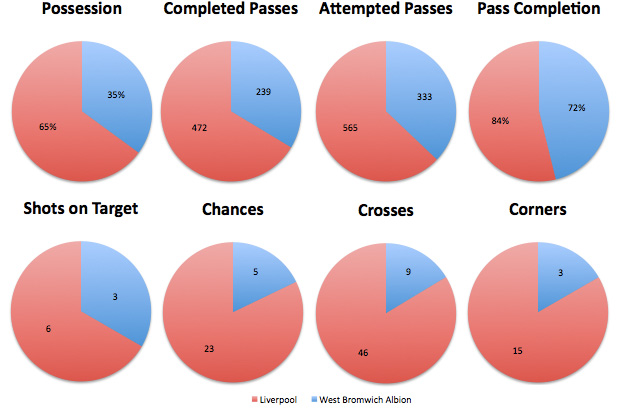