Jamie Carragher and Liverpool's Defence by the Numbers

Share All sharing options for: Jamie Carragher and Liverpool's Defence by the Numbers

With Jamie Carragher's poor showing against Everton in the FA Cup—not to mention the frankly puzzling decision by Kenny Dalglish and the coaching staff to play him when all four of the men who have made up Liverpool's most successful defensive unit this season were fit—we thought it might be interesting to look at how Liverpool's centre backs have performed this year. It's certainly interesting, but it also only confirms what most will have felt at a gut level every time they saw Carragher five yards deeper than his fellow defenders yet still often unable to keep up whenever Everton entered the Liverpool end.

With fourth centre back Sebastian Coates only playing 389 minutes in the league this season, a total which equates to 12% of the minutes played by Liverpool and a quarter of the number three centre back's time on the pitch, it left only three defenders who have played significant minutes to compare. And while normally we might talk through the numbers, attempting to provide context and insight into the presented stats, charts, and graphs, this time around they seem to require little expository accompaniment: Jamie Carragher is well off the pace compared Liverpool's best duo. He doesn't tackle as often or as well, he doesn't regain the ball as well, and he doesn't retain the ball as well.

Based on the evidence, when Daniel Agger and Martin Skrtel are fit it is unforgivable for Carragher to start in the middle ahead of either one of them, and when one of them isn't fit he can no longer be considered a long term solution. Jamie Carragher's past deserves to be honoured, but he doesn't deserve to be played because of it—and clearly he does not deserve to on current form. The sad but unavoidable truth is that if he sees the pitch again this season outside of the final minutes of a victorious FA Cup match or the final game of the year it will represent exceptionally poor management. 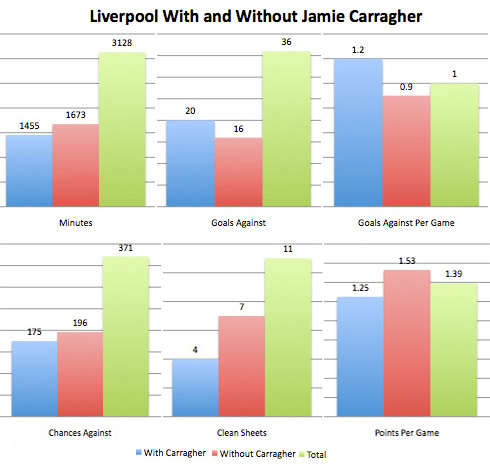 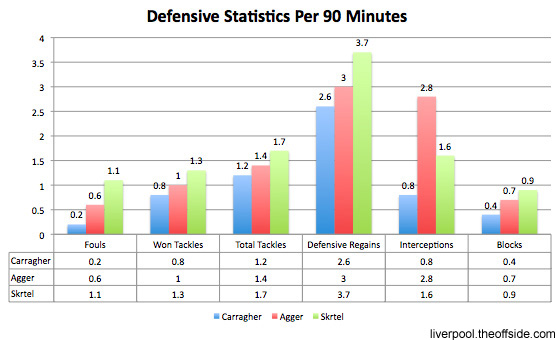