How Not to Defend a Free Kick/How to Find Redemption

Share All sharing options for: How Not to Defend a Free Kick/How to Find Redemption

Andy Carroll won the match, making him the hero. On the other hand, for most of the game he was quite thoroughly anonymous. Though of course he went some way towards making up for that by being one of the best players on the pitch in the closing minutes. Still, until those closing minutes it seemed the two things he'd be remembered for would be missing what had until then been Liverpool's best chance of the second half and for handing Blackburn their first goal of the night... 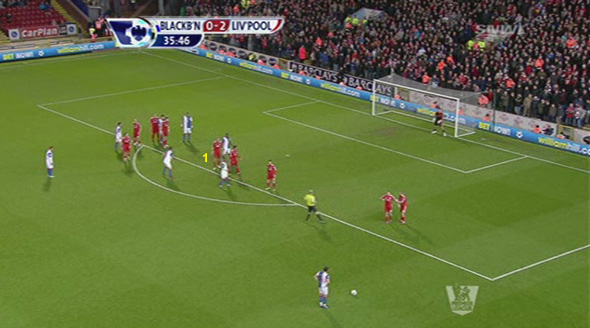 Liverpool, as they have done ever since Rafa Benitez left, line up to defend through man marking, with one defender paired to each Blackburn attacker. Most centrally, Maxi Rodriguez and Glen Johnson are watching the two men in front of them while Andy Carroll (1) is responsible for covering Yakubu, who lines up in an offside position before stepping onside just as the ball is played. 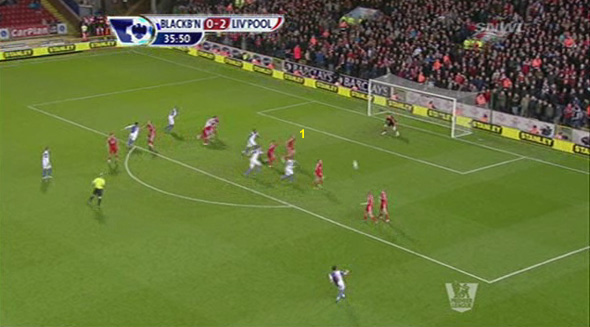 Instead of tracking his man, Andy Carroll (1) watches the ball as it sails in and, misjudging its flight, steps inside of Glen Johnson. 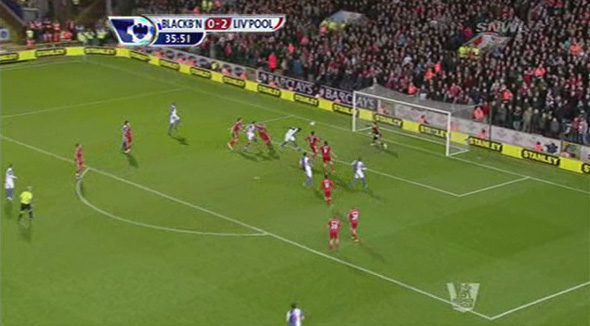 The ball instead passes well over Carroll's head, leaving Johnson to try to catch up to the uncovered man. But it's far too late and Yakubu hammers in the free header.

About the only positive that comes from man marking is that it allows those not privy to a club's training sessions to quickly and easily determine who is to blame when a goal is scored. Given the criticism Andy Carroll has come in for of late, that he was the easily identifiable culprit in this case seemed set to be another proverbial nail in the coffin for his largely underwhelming Liverpool career.

It didn't help that without buzzing midfield support after Liverpool went down to ten men Carroll looked increasingly ineffective, with even his previously commendable work-rate dropping as the game moved along. Things only got worse when early in the second half he found himself clear in the box just as Yakubu had been in the first, only rather than making clean contact and scoring Liverpool's third he fluffed his lines and sent the ball well wide of the goal. Soon afterwards, Blackburn would pull level.

Still, even before his goal in stoppage time offered full redemption on the night for his earlier struggles, Carroll had managed an exceptionally strong showing in the final minutes, using his size to good effect to help Liverpool fight off Blackburn's final spell of sustained pressure and giving the visitors a chance to make one final push for the win themselves. From his error on Blackburn's first through a long and ineffective spell that lasted much of the second half and included a near own goal, however, it's not unfair to say that Carroll's game was more bad than good.

But of course, once yesterday's match begins to fade in the memory, none of that will be what is remembered. Instead what most will remember is his strong—at times even dominant—play as the game wound down. And if nothing else, they'll remember his winning header in stoppage time. We've said it before with Andy Carroll, repeated it with each false dawn and every moment of promise. Hopefully, though, this time really is the time when one uplifting and cathartic moment can be what spurs him on to a successful career at Liverpool Football Club.

So while we can't ignore that he completely lost his man to hand Blackburn their first goal and that on the whole his night was spotty at best, we also can't ignore the way in which that night ended while hoping it is mostly this Andy Carroll we see from here on out.

Correction: Previously Blackburn's free kick was referred to as a corner. Tip of the hat to Michael Kane for spotting the error.