Liverpool 2, Stoke City 1: Back to Wembley

Share All sharing options for: Liverpool 2, Stoke City 1: Back to Wembley

Stewart Downing's second half strike sends Liverpool back to Anfield South for next month's FA Cup semi-final, with the hosts narrowly getting past Stoke. First half goals from Luis Suarez and Peter Crouch left the match level at the break, but a positive response after the restart proved enough to give Liverpool the victory. It wasn't a perfect performance by any stretch, and there were moments during which it seemed Liverpool would manage to throw it all away, but in the end it's another win and another trip to London.

Maxi's resurrection proved the biggest shock when the team sheets were released, with the Argentine mostly an afterthought in the past month but back in the eleven today. The pick made sense, as Stoke's style demands that someone do the unlocking, and that he was included along with Luis Suarez was encouraging. Andy Carroll partnered Suarez up front, and Stewart Downing, Jay Spearing, and Steven Gerrard rounded off the midfield, with Charlie Adam left on the bench. As expected, Martin Kelly again started at right back, and Jamie Carragher was again preferred to Sebastian Coates in central defense, partnering with Martin Skrtel in the middle with Jose Enrique on the left and Pepe Reina in goal.

The opening twenty minutes was about what you'd expect in any match featuring Stoke City---sloppy back and forth by both sides, aimless hoofs turned away and possession wasted on nearly every turn forward. There was the expected physical play early, although surprisingly it was a Liverpool man taking the first booking, with Kevin Friend handing Martin Kelly a yellow on five minutes for a mistimed challenge on Matthew Etherington. Glenn Whelan earned one of his own minutes later for a late lunge at Jay Spearing, and the tone was mostly set for a testy day.

But in the 23rd minute things finally opened up for a brief moment, and Luis Suarez took full advantage of the first chance of the match. A quick one-two with Maxi saw Suarez free on the edge of the area, and his curling shot beat Thomas Sorensen at the far post for the opener. Maxi held it up well, laid it off even better, and the finish from Suarez was superb. For a side that's missed far easier chances on the year, it was a welcomed site to see their first real chance taken. 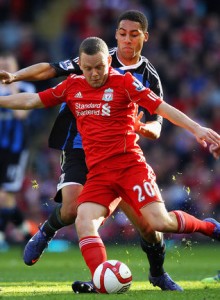 It was a short-lived lead, however, as a third successive corner (wrongfully awarded after replays revealed it should have been a goal kick) from Stoke finally broke Liverpool's defense. Ryan Shotton was unequivocally obstructing Pepe Reina, but the keeper did little to push past him and Andy Carroll was absolutely useless in marking Peter Crouch, who barely had to do anything to nod home. Disappointing from Liverpool but not entirely surprising, and the rest of the first half gave little indication that Liverpool could break through.

Thankfully the second half started much differently, with Steven Gerrard testing Sorensen straightaway and Luis Suarez nearly giving Liverpool the lead with his head after a well-taken free-kick from Stewart Downing. It was Downing who would finally put the hosts in front for good, though, as he streaked inside and played a ball to Gerrard in the middle. Gerrard either laid it off or just got caught up, but either way the ball sat perfectly for Downing, who took one touch to his left and blasted past a helpless Sorensen. It was what we've waited for from Downing all season, and it was enough to see Liverpool move on to Wembley for the second time this season.

While it's not quite as fulfilling as wins over United or Everton or Chelsea, that Liverpool beat Stoke for their next Wembley visit is particularly satisfying. They've proven to be a huge bogey team for Liverpool over the past few years, and their general approach, in addition to their loutish set of supporters that booed every Suarez touch and Liverpool injury, makes beating them that much better. They have their set style, priding themselves on physicality yet crumbling at the first hint of receiving contact, and good for them that it's effective or whatever, but bad for football and everyone who's got to watch them on a semi-regular basis.

So yeah, great to progress, and even better that Liverpool did it against a side that absolutely demands that their opposition break them down. Play from the wide areas simply wasn't going to work for the hosts, so it was little surprise that both Liverpool goals came from smart passages of play through the middle, with quick interplays releasing both goalscorers. Even better that Liverpool managed to make in-game adjustments, which, even though they didn't occur as frequently as we might have liked, has been a major point of contention all season.

There weren't as many standout individual performances today---Martin Kelly was rendered mostly anonymous after his early booking, Andy Carroll was less influential, and, at least for most of the first half, Stewart Downing struggled on the right. Steven Gerrard and Jay Spearing again partnered very well with less flash from the captain, and Luis Suarez continues to trend positively after such a bumpy season. Maxi's return was welcome, and he mostly did what was asked of him in trying to link play and searching for any openings Stoke allowed. Mentioning Martin Skrtel's terrific play is, at this point, unnecessary. To anyone paying attention he's emerged as the player of the season for Liverpool, lynching together a defense that had another relatively strong showing. Jamie Carragher's his senior, but there's no question who the leader is right now in Liverpool's back line.

It was never going to be pretty, and it was never going to be perfect. But Liverpool got the goals when they needed them and found a way to win, which is exactly what we've longed for all season. They booked their spot in the semi-final, and can now wait to see whether they'll have a chance at three Merseyside Derby victories or at actually giving Sunderland a performance they can be proud of.

Either way, Liverpool's moving on, and it's a great way to finish the weekend.