Share All sharing options for: Liverpool 3, Everton 0: A Derby Recovery

Steven Gerrard's hat-trick leads Liverpool past Everton at Anfield, turning things around after the disappointing performance on the weekend. Liverpool were dominant for large spells, and while there'll be more than a few questions on the Everton side of things, there's no denying that Liverpool were more than deserving victors. As has been the case any time Liverpool look more positive, though, now comes the task of repeating this effort each time they take the pitch.

After the loss on Saturday there were bound to be some changes, and as expected, one came in the form of Jamie Carragher, who replaced Sebastian Coates alongside Martin Skrtel. Carragher's presence pushed Skrtel to the left side of central defense, with Martin Kelly keeping his place in the side due to Glen Johnson's lingering injury concerns. As many had hoped, Charlie Adam made way for Steven Gerrard, who came back into a midfield with Jay Spearing and Jordan Henderson. There were places for Stewart Downing and Andy Carroll as well, with the former on the left and the latter up front with Luis Suarez.

If you didn't tune in until after the fifteen minute mark, you missed an opening from Liverpool that was everything we've wanted from them this season---pressing high, pushing forward in attack, and creating a handful of chances. The lack of finished seemed more about Tim Howard's ability than the host's profligacy, as the recently re-signed keeper denied terrific chances from Steven Gerrard and Luis Suarez.

Gerrard's came on the tail end of a lovely move, with Suarez cutting back to the captain, whose knock-on left him one-on-one with Howard, who got down quickly to save on his left. Jack Rodwell intervened to clear away Jordan Henderson's follow-up effort, but combined with the left-footed strike from Suarez a few minutes later, after a flick-on from Andy Caroll, Liverpool were easily on top.

That'd be their last real threat until Gerrard's opener aside from a limp Carroll header, though, as they settled back and Everton took most of the impetus. Neither side were particularly threatening despite Everton's growing influence, and the best the guests could muster was a few corners and some extended time spent on the periphery of the Liverpool area.

In the 34th minute Liverpool finally took the lead, fresh on the heels of what seemed like a dangerous Everton possession. Marouane Fellaini's errant pass gave Liverpool a chance to break, and at the other end an interplay between Jordan Henderson and Luis Suarez freed the Uruguayan in the center, and his pass knicked off Gerrard and onto Kelly, whose shot was saved by Tim Howard. Sylvain Distin could only clear as far as Gerrard on the edge of the area, however, and the captain masterfully curled a left-footed effort over the number of bodies and into the net.

Kelly had another chance moments later, this time after being played in by Henderson, only to drag the shot inches wide of the far post. Everton managed a header on goal through Dennis Stracqualursi, but Reina saved easily, and a Suarez break spoiled by Distin saw out a half that, as far as Merseyside derbies go, was relatively tame.

The guests were at least a bit lively after the restart, but any hopes of drawing level were dashed on 51 minutes as Gerrard netted for the second time. Jordan Henderson played a wonderful through ball into space on the right for Suarez, who jinked his way towards goal and knocked back towards the penalty spot. It would have taken some doing for Suarez to get a shot off given his positioning, and thankfully he recognized that, leaving it for an onrushing Gerrard, who had no problem blasting past a helpless Tim Howard. 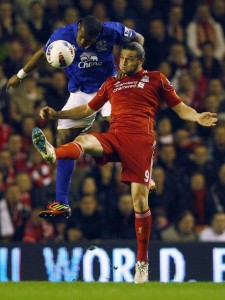 A chance for Carroll, again created by Suarez, followed a few minutes after Gerrard's second, and Stewart Downing's cross on the next possession very nearly met Martin Kelly's right foot for Liverpool's third. At the hour mark David Moyes opted to bring on all three substitutes in an effort to turn the match over, and while Nikica Jelavic almost turned home on a move that was ultimately ruled offside, there was little influence to be seen coming from the blue half of Merseyside. Suarez again turned creator at the death, stalling a pass from Gerrard only to return it to the captain alone in front of goal for his third.

Today changes little about where Liverpool stand; it doesn't erase any of the club's failings over the past few weeks, it doesn't change much in terms of their place in the table, and it doesn't redeem disappointing seasons from a few of the principals. Only sustained effort and success can do that, regardless of how convincing Liverpool have looked in isolated examples throughout the season, today included.

But it certainly feels a hell of a lot better, and it's not violating any laws of good taste to just enjoy that nearly all of the narratives of the season were overcome on the day---chances created but not taken, opposition goalkeeper in excellent form, unable to kill a match off despite looking dominant. Nearly all of those boxes were ticked early on, and when Everton picked things up midway through the first half, it wouldn't have been surprising if things ended up much differently.

The quality finally shone through, though, with Steven Gerrard providing the quality to finish chances, Andy Carroll and Luis Suarez putting in effective performances in their own way, and nearly all involved doing their part to give Liverpool the comfortable win. Gerrard will get the attention for the goals, Suarez for the service, and Carroll for the workrate, but Martin Kelly and Jay Spearing were also excellent, with the former a stalwart at both ends (even if clear-cut scoring chances still elude him) and the latter giving Liverpool exactly what they needed in midfield---no loud explosions or fireworks, but someone willing to do the work in defense and keep the ball moving in possession. Jose Enrique returned to his more solid self, Jamie Carragher and Martin Skrtel combined well, and, while he was the most inconsistent on the day, Jordan Henderson showed flashes of his ability through the middle and in first-time distribution.

Just a wholly satisfying day, and it's only dampened by the fact that it occurs in the midst of such a disappointing season to this point. That can't loom too large, however, and today shouldn't only be a source of frustration at why Liverpool haven't been able to do this more consistently. I think that's a fair question to ask and a fair frustration to have, but too much of that might cause you to miss out on how nice it was to see Liverpool put it all together, at Anfield, in a derby, and win going away.

Feeling good can be okay too.