Liverpool on Form for Worst Finish Since 1954

Share All sharing options for: Liverpool on Form for Worst Finish Since 1954

Based on Liverpool's season-long form, they are now set to finish with 54 points. Based on their form over the past ten games, however, 48 points would be the expected final tally. The last time they had fewer than 54 points total in a single season was in 1980-81, but that was the final year clubs in England received two points for a win instead of three. England's first division was also larger at the time, meaning that clubs played 42 games instead of 38. But if one adjusts by awarding three points for each of the club's 17 victories, one for each of their 17 draws, and then uses the resulting points per game total to figure out how many would be achieved over 38 matches, the answer instead becomes 62.

In the days of two points per win and 42 games, in fact, one has to go back to 1964-65 to find a season where Liverpool gained fewer than the 62 adjusted points they did in 1980-81. That year they won 17 and drew ten for 44 points, which when adjusted becomes 55 points in the modern system—one more than what Liverpool are now set to manage if they improve their recent form to match the season-long average of 1.44.

That's slightly better than in 1992-93 and 1993-94 (adjusted), and 1998-99, when Liverpool finished with the 54 points they will get if they significantly improve their dire post-Christmas form to match the season-long average. Together with a 1962-63 season when they returned to Division 1 after almost a decade spent in the second tier and also managed an adjusted 55 points, these five seasons represent Liverpool's worst results since Bill Shankly returned them to the top flight.

When adjusting results to allow each season to be fairly compared and put in its proper historical context, the last time Liverpool actually ended a campaign with less than 54 points in either Division 1 or the Premier League was when they were relegated in 1953-54 after managing an adjusted points total of 33. They followed that up with only 44 adjusted points in their first season in Division 2. On current form, then, Liverpool's record is set to be their worst either since being demoted in 1954 or since 1961-62, their final year in the old second division, depending on how one comes at it.

With a bit of luck, though, Liverpool might be able to return to something approaching their overall, season-long form, allowing them to go into the summer having only added a new entry to the list of the club's worst seasons since returning to the top flight instead of setting a new record for futility. There's really nothing of value that can be added to the cold, hard numbers at this point. It's simply and inescapably depressing, and that's about all there is to it. 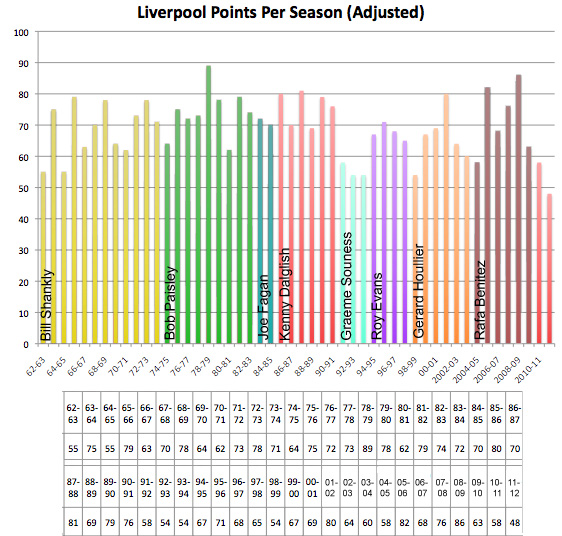 Note: Looking at points totals adjusted for three points per win in a 38 game campaign, 2008-09's 86 points was in fact Liverpool's second best ever total, close on the heels of a 1978-79 campaign that would have captured 89 adjusted points and one of only four that would have ended with more than 80 points.