Share All sharing options for: Liverpool v. Manchester United: The Past Four Years

In the past four seasons, Liverpool have played seven games under three managers against Manchester United in the league. Four have been Liverpool victories, two have been won by United, and one has been a draw. And with match number eight coming up on the weekend, it seemed like a good time to look back at some of the statistics beyond the final score from the seven previous games to see if any kind of pattern or omen for Saturday's match appears.

In 2008-09's home match, Liverpool not only controlled possession, they also outshot United by a significant margin (15 to 5) and attempted far more passes (417 to 351) while out-tackling their opponents 27 to 20.

In the away match, by comparison, many of the key statistics were nearly mirror images of the reverse fixture. This time around, Liverpool was out-passed (435 to 357) and out-shot (10 to 8), but as in the game at Anfield they tenaciously stuck to their opponents (out-tackling United 32 to 18) and put away their chances at a much higher rate to overcome the run of play deficit.

Two wins, and two routes to winning, with Liverpool winning at home through possession and taking the game to Mancheter United and then winning on the road by staying defensively solid and striking on the counter.

In 2009-10's home match, Liverpool's statistics in victory appear similar to those seen at Old Trafford the year before as they lost the possession battle and were heavily out-passed (476 to 360) but took their chances and were far tougher tacklers (32 to 25). The only difference this time around was that despite being dominated in possession and passing, Liverpool managed to out-shoot United by an 11 to 5 margin.

The away match had similar possession numbers and a similar gap between United and Liverpool in the passing game (535 to 428), but unlike in the past two matches played on the counter, Liverpool's tackling was down and this time around they could only edge United (29 to 25), leading to fewer chances and a loss.

One win and one loss this time, and both arrived at through a similar game plan—just with the home leg's execution being better than the trip to Old Trafford.

2010-11's home game was Kenny Dalglish's second against United after facing them in the FA Cup immediately following his return, and it stuck to the most common winning formula from past seasons as Liverpool lost the possession battle and were out-passed (500 to 366) but edged their opponents in shots (14 to 9) and tackles (24 to 20) and, largely thanks to Luis Suarez and Dirk Kuyt, got the win despite being down in the run of play.

By comparison, the away match earlier in the season was the only time Roy Hodgson had the chance to lead Liverpool against United, and statistically it stands out from many games against United in recent years. Not only was it odd in that Liverpool shaded possession, but for the first time since the home game in 2008-09 they out-passed their opponents from Manchester (511 to 470). Despite this, United out-shot Liverpool and won the game.

As in 2009-10, 2010-11 saw a loss on the road and a win at home, but unlike in past years it could be argued that for once Liverpool was actually the side that slightly edged the run of play at Old Trafford despite losing. 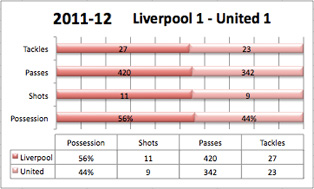 2011-12's home game for Liverpool saw their biggest possession edge in four seasons while they also out-passed United (420 to 342), out-shot them (11 to 9), and out-tackled them (27 to 23). Yet despite that statistical dominance they could only manage a draw.

So what does it all mean? Funnily enough, the average shift in possession between home and away matches over the past three seasons works out to a grand total of zero. What hasn't changed is that in every home leg Liverpool has out-shot United and then in every away leg United has out-shot Liverpool regardless of possession or passing statistics, and so one could reasonably expect the home side to have more scoring chances—and as such give Liverpool fans more nervy moments—come Saturday.

One thing to note is that based on recent history, Liverpool would appear to have a better chance of winning if Manchester United out-pass them—just as long as Liverpool can effectively track and tackle their opponents and then finish any chances they do get on the counter. Both are big question marks given Lucas' continuing absence and the troubles this year's squad has had with finishing, but any way you come at it it seems to argue that more than anything Liverpool will need a strong showing in midfield.

It also, somewhat intriguingly, seems like a match well suited to both Andy Carroll and Stewart Downing if it holds true to recent form, with both perhaps better suited to a counter game than they are to possession. Though of course one only need look back to last season's home match where Kuyt and Suarez tore United to shreds to see that there's more than one way to defeat an opponent that dominates possession and passing.

In short: Expect United to dominate, and expect some nervy moments. And if that somehow isn't how the game starts off, then you might really have a reason to start worrying.