For many, there has been a belief that in order to get the most out of Charlie Adam he must be played as part of a three-man midfield, alongside players who will be able to cover for his shortcomings and in doing so allow him to do what he does best—break down tough opponents and create scoring opportunities. And against Tottenham on Monday, he was indeed played as part of a three-man midfield. However, it turned out to be Adam and not Jay Spearing or Steven Gerrard who was tasked with the primary defensive role in a system that seemed designed to force Adam into doing what he's least suited for while curtailing his ability to contribute in the attacking third.

Adam's four interceptions and nine attempted tackles—four of them won, and with the player going 2/4 immediately in front of Liverpool's penalty area—reflected that he was by far Liverpool's most defensively active midfielder, as did his passing chart, where of the three midfielders he was shown to have by far the greatest density of passes in his own half. This perhaps shouldn't be a huge surprise in comparison to Gerrard, with the captain having one interception and four successful tackles on four attempts in Tottenham's half while playing a decidedly advanced role. What is surprising, however, is that Jay Spearing showed little defensive intent against Spurs. In fact, his only defensive actions in Liverpool's end were made on the right as he at times helped to cover Martin Kelly's flank against Gareth Bale and made one interception and two of his four attempted tackles there. 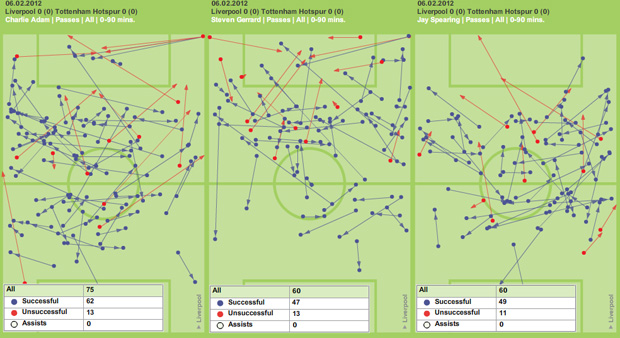 By design, it appears as though it was Adam who was tasked with being the primary screening, holding midfielder. Perhaps, with that in mind, his largely anonymous performance in the final third is more forgivable. Yet it's hardly a slight to say that, even after having one of his better days defensively against a Tottenham side largely content to draw, his contributions in Liverpool's end of the pitch were far from stellar—particularly a trio of clumsy tackles that gifted Tottenham free kicks within range of goal.

It's also worth noting that compared to Hederson last week—even though the young midfielder was in a more advanced position—and compared to Lucas before he was injured, none of Liverpool's midfielders seemed especially interested in building a foundation for the attack. Whether by design or simply a reflection of the natural tendencies of the players on the pitch, almost all of the passing from Liverpool's trio was direct and aggressive, reflecting attempts to push the ball past Tottenham's well-drilled defenders quickly rather than stretching them and waiting for holes to develop. Even Adam in the holding role sends almost none of his seventy passes from open play less than twenty yards, and given how little Liverpool created by way of genuine goal threat it certainly seems as though the club missed having a solid foundation on which to build their attacks.

Beyond that, Adam's unsuitability for the role is also reflected in Liverpool's two best performances coming from defenders, with Glen Johnson and Martin Skrtel putting in man of the match-calibre performances. Liverpool's defence has played superbly more often than not when called upon, but given that Tottenham seemed largely content to play for the draw it's surprising just how often that defence was called upon to save the day. Though of course, suggesting that Adam is poorly suited to play the role of the deepest, most defensive midfielder and the man responsible for screening the defence is hardly revelatory or controversial. And so again, as is often the case, it all comes back to the manager.

It comes back to questions of why, exactly, Adam would start as the deepest player in a midfield trio against a Tottenham side that flustered him into a pair of first half yellows in the fall's reverse fixture. Certainly he did better this time around, in part as a result of Tottenham's pressure falling off after the opening minutes and the aforementioned classy performances from Liverpool's defenders, but that he wasn't a massive liability is hardly a ringing endorsement. Moreover, chaining him to a more defensive role—one that is anything but his specialty—hindered his ability to contribute the things that he does do well. In the end it meant a performance from Adam in particular, and Liverpool's midfield as a whole, that while competent enough not to lose hardly seemed best suited to securing a win.

In microcosm it's a question even the most reasonable fans have been asking all season: Even accepting the shortcomings of the players on hand, is the talent available being used in a way that gives Liverpool its best chance to win week in and week out? Adam's inclusion in a role he would seem poorly suited for didn't lead to a loss, but it still left a lot to be desired and seemed a waste of a player when even the most ardent Adam supporter would likely admit the role he was chosen for only highlights his flaws while minimising his ability to make an impact.

It's also another sign that, cost and wishful thinking aside, Charlie Adam wasn't only brought in to be a squad player, an impact sub, or an option to unlock tough defences. Many have insisted throughout the season that for six or seven million pounds he offers quality depth and a potentially difference-making skill-set, and that it has only been injuries that have led to him being used—or overused—as a constant starter. That argument seems far less convincing when not only is he consistently given starts ahead of other midfield options, but he is even given starts as the side's primary holding midfielder over the seemingly more suitable Jay Spearing.