Liverpool 0, Tottenham 0: Grinding to a Halt

Share All sharing options for: Liverpool 0, Tottenham 0: Grinding to a Halt

Liverpool can't continue their hot streak and end up with their eighth home draw of the campaign, failing to take advantage of a Spurs side that were lacking in both personnel and intent. With the success of the past few weeks creating a healthy dose of optimism this one's got to be chalked up as a disappointment, and worrying in that Liverpool yet again failed to capitalize in a match that mostly looked like theirs for the taking.

There was a relatively unusual amount of team news on both sides leaking out in the hours leading up to kickoff, with rumors about a hamstring problem for Jose Enrique and a number of absences on the Spurs side, including manager Harry Redknapp. All were confirmed one way or the other, and the absence of Enrique meant that Glen Johnson filled in at left back with Martin Kelly, who was terrific against United last weekend, coming in on the right. The other significant news, even if most expected it, was that Luis Suarez started on the bench along with Jordan Henderson, meaning the front three against Wolves returned and Jay Spearing, Steven Gerrard, and Charlie Adam rounded out central midfield.

As you'd expect from a side nipping at the heels of the top two, Spurs pressed high in the opening minutes, with Liverpool content to soak up the pressure and look for space on the counter. The hosts gradually took the match over, though, as Steven Gerrard got forward, mostly on the right, in search of finding a crack in a crowded final third.

Andy Carroll continued his confident play as the lone man up top, holding up play and retaining possession on a number of Liverpool forays forward, but too often their possession fizzled, with crosses regularly cleared and the final ball remaining elusive. Two set pieces gave Liverpool a glimmer of hope---first drawn by Glen Johnson on the edge of the area, and later with Scott Parker earning a yellow for his tackle on Steven Gerrard, but neither effort made it past the wall.

Spurs saw more of the ball as the half died down, looking to nick a goal before the break with an extended spell of possession. Liverpool's defense gave little ground, however, and Glen Johnson's arrowed shot just before the whistle, saved easily by Brad Friedel, signaled the end of an entertaining but ultimately fruitless first half of football.

There weren't any significant changes at the half, with both sides more than a little sloppy. And the most significant incident of the opening fifteen minutes had little to do with the football, as Daniel Agger reacted strongly to a Gareth Bale dive down Liverpool's left. The resulting scrum saw the Welshman booked for shoving Agger and Bellamy as the peacemaker, and a quick Spurs attack followed that saw Bale fluff a right-footed volley after a brief scramble in the Liverpool area.

The introduction of Luis Suarez brought new life to the match, and the Uruguayan's first invovlement came immediately as he dispossessed Benoit Assou-Ekotto on the near side, working an opening for Gerrard to cross. As the narrative demanded, he was also immediately involved in controversy, getting booked for a volley of Scott Parker's abdomen and bringing the match to an abrupt halt. 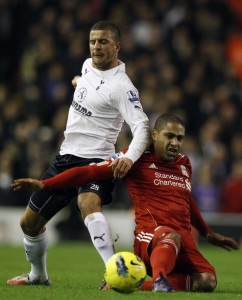 Another booking for Liverpool would follow, this time for Martin Skrtel after a slightly high challenge on Bale in which he won the ball but also got a snag of the winger's knee. From there the match only provided two chances, one at either end---one for Bale on the break that Reina got down to save, and one for Suarez from a Steven Gerrard free kick that the recently-returned forward headed straight to Friedel under pressure from Ledley King. The match limped to a close, Spurs happy to close down shop, and Liverpool once again unable to find any sort of final product.

I suppose on the Spurs end of things they'll be happy---it became clear as the second half wore on that they were only interested in a point, and with Liverpool struggling so frequently to finish their chances, they saw the match out fairly comfortably. And given how under-strength they were, it was a decent enough display, particularly from Kyle Walker and, for his work in the first half alone, the impressive Scott Parker.

But you can't help but be disappointed in Liverpool, who had a chance to maintain momentum and kick-start an important month with a big victory. They weren't entirely terrible, with a few bright spots individually, but as a whole they were uninspiring and ineffective. After a promising run of play early in the first half and immediately after the introduction of Suarez in the second, it seemed like things would be turning in Liverpool's favor. As has so often been the case at Anfield, though, it was all for naught, and they're left to wonder about what might have been.

Their success in defense continued despite the shake-up, with Glen Johnson standing out on the left and Martin Skrtel the best on the night were it not for Johnson. The rest were good but not great---Steven Gerrard had a number of nearly moments, deft touches, and decent crosses, Jay Spearing was good defensively but erratic going forward, and Charlie Adam was a non-factor, providing little going forward while proving somewhat serviceable defensively.

Same story for Andy Carroll, who was exactly what you'd ask for in a hold-up man, but had little support, was wasteful in front of goal, and once again found himself working to get on the end of a number of poorly-placed crosses. Dirk Kuyt and Craig Bellamy were active but lacking in influence, and while Suarez lifted Anfield with his introduction and proved a pest at times, he couldn't find the finish when Liverpool needed it most. Barely worth mentioning is the substitute appearance of Stewart Downing---a tired Bellamy would have been preferred, and it's a continuation of the worrying slide that we've seen for most of the season.

For a match that was so heavily anticipated, this one's certainly a letdown. We had hoped for a performance that signaled Liverpool's intent, one that would close the gap on fourth and keep pace with the rest of the challengers ahead of Saturday's trip to Manchester. Instead we got a mostly familiar package and a disappointing result, left wanting for more yet again.

But at least the buildup to the weekend won't be a complete circus. Right?