When Joe Mason slotted Cardiff's first goal of the night through Pepe Reina's legs, putting the underdog Championship side up 1-0, it may have in fact been the worst goal conceded by Liverpool this season. Past contenders for worst of the year have come when a series of individual mistakes over a fairly short period of time have conspired to hand an opponent a goal, and as bad as the markers given up against the likes of Stoke and Norwich may have seemed at the time, as with most any side will concede they came from a series of minor mistakes that slowly added up to the ball hitting the back of the net.

The difference on Sunday was that rather than being a series of small errors over time leading to Cardiff's goal, no less than four Liverpool players on the pitch at Wembley managed to do the wrong thing at almost the exact same moment. That Liverpool managed to win the League Cup in the end may make it a touch easier to appreciate the absurd unlikeliness of the situation in retrospect. Being in large part a freakish occurrence unlikely to happen again any time soon, though, hardly made it easier to take at the time: 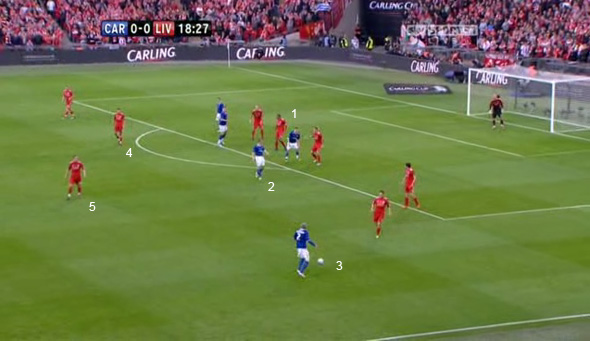 After Glen Johnson followed a Henderson cross aimed at Carroll and Suarez into the box in attack only to find Cardiff countering quickly, Liverpool's right back's scrambled return to defence from a central area sees him slot in between Skrtel and Agger (1) momentarily, with Skrtel returning to a fairly central position after covering for Johnson on the right during Cardiff's break. With four Cardiff attackers faced up to three Liverpool defenders clustered centrally, Jose Enrique can be seen eyeing Cardiff's Miller (2) from his left back position while Stewart Downing appears primarily responsible for Cardiff's left back McNaughton (3). In theory Liverpool have enough cover if Agger and Enrique can coordinate their coverage of the two Cardiff players shaded towards their side of the pitch, though if Steven Gerrard (4) or Charlie Adam (5) had shown any intent to aid in Liverpool's defence it would have made things far, far easier. 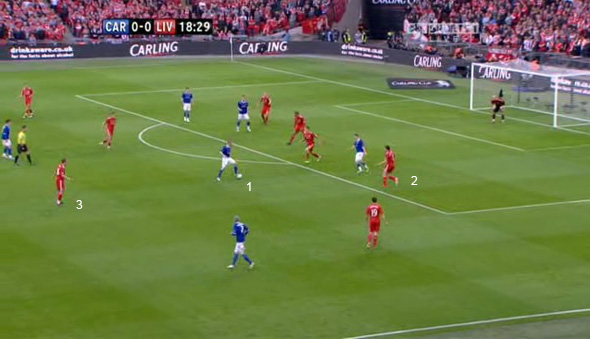 With McNaughton playing the ball inside to Miller (1), Daniel Agger is left with a choice: stick with his man Mason or hand him off so that he can attempt to close down Miller and prevent the Cardiff striker from having a free shot at goal from the edge of the area. He choses the later option, leaving Enrique (2) to belatedly attempt to move inside to cover Mason. There's no doubt that Enrique should have been moving inside earlier to cover for the threat of four Cardiff attackers, especially as Downing had McNaughton well covered. There's also no doubt that Charlie Adam (3), who has in fact moved further from goal as Cardiff have passed their way towards it, has played his role in leaving the defence exposed and outnumbered. Still, in the situation as it stood at that moment—with Agger facing two dangers and help arriving late at best—it was a mistake for him to try to close down the threat further from goal. 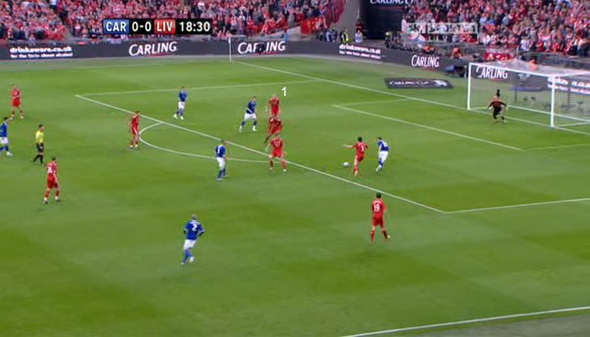 The final blatant mistake in less than four seconds comes from Martin Skrtel (1): As the play develops it becomes clear he hasn't stepped up alongside Glen Johnson in an attempt to play the now largely uncovered Mason offside. Enrique is a second late and unable to make the interception, while Charlie Adam remains rooted in place, observing that most quaint concept of "defence" as though he were a striker conserving energy for attack. Immediately afterwards, Mason receives Miller's pass and cooly slots it between Reina's legs.

Stewart Downing, returning to aid his fullback, and Glen Johnson, having done his best to return to the defence after playing a key role in Liverpool's attack, both come out of the mess blameless. In fact, both deserve some amount of commendation for smart and determined play that at times they have been accused of lacking. While Liverpool's central midfielders were painfully slow in returning to defence, Downing had fully turned to his defensive duties by the time Cardiff were in a threatening position. Johnson, meanwhile, had only moments earlier been ahead of both Adam and Gerrard when Liverpool had been attacking, and beyond using his unquestioned pace to return to defence he can also clearly be seen stepping up to play Mason offside when Agger makes his choice to close down Miller.

Just as clearly, though, all four of Adam, Agger, Enrique, and Skrtel made massive and near-simultaneous errors. In the case of the last three, they were obvious errors of judgement, and given the play of Liverpool's backline this season that they all took place at almost the exact same moment makes for a surprising collection of errors that seem unlikely to be repeated. As for Charlie Adam, it can be more difficult to wave away his mistake of inaction seeing as a lack of application in defence has been a painful running theme ever since Lucas Leiva went down injured and Liverpool lost their only midfielder capable of doing the job of two in defence.

Agger, Enrique, and Skrtel all made mistakes; Adam just didn't do anything. It could also be argued that in addition to the core four errors that led to the goal, Pepe Reina did a poor job of making himself as large as possible when he allowed Mason to pass the ball under him and into the goal. Beyond that, there's also a case to be made that though Gerrard can be seen belatedly moving towards the ball just before Cardiff scores, if he had been aware of Cardiff's early numerical advantage and moved to assist Johnson and Skrtel on their side of the defence it may have freed up another man to close down Miller while allowing Agger to stay with Mason.

It was in all likelihood the single worst goal Liverpool has conceded this season from open play. Thankfully they were still able to win the game in the end. And thankfully, too, it seems to have come from a confluence of error that at least for the to-blame defenders should prove difficult to replicate.