Liverpool win the League Cup for a record eighth time, first fighting back level and then taking a late lead in extra time only to concede at the death. It wasn't pretty, and the problems that they came into the match with in large part remained, but it's silverware and confirmation of European competition for next season, and it's reason to celebrate.

There was only one change for Liverpool from last weekend, with the fit-again Daniel Agger coming back into the eleven and Jamie Carragher relegated to the bench. That this was the only change meant Craig Bellamy once again missed out, with Stewart Downing starting on the left and the Welshman on the bench. Otherwise it was business as usual, with Steven Gerrard, Charlie Adam, and Jordan Henderson through the middle (although Henderson also spent significant time on the right), Andy Carroll and Luis Suarez in attack, and a full-strength defensive unit.

The pre-match in and of itself was a spectacle to behold, with 30,000-plus Liverpool fans drowning out the canned music as they watched the sides take the Wembley pitch. And within two minutes we were all nearly in dreamland, as a Gerrard-led break ended with a Glen Johnson curling effort off the underside of the bar. It was a terrific shot and a flowing forward movement from Liverpool, who would continue their pressure for most of the opening ten minutes.

Cardiff saw their first chance of the match on ten minutes, with a Kenny Miller effort flying over Pepe Reina's goal after a nice passage of play and a lovely backheel to give Miller the chance first-time. It was mostly Liverpool's match, though, with most of the action headed toward the Cardiff goal and the Reds dominating in possession.

As we've seen so often this season, though, possession without finishing is just possession, and in the 19th minute Joe Mason gave the Welsh side the lead. Kevin McNaughton played a pass into the out-stepping Kenny Miller, and the Scot glided a lovely through ball into the path of Mason, who passed it through Pepe Reina's legs for a 1-0 lead. It was a shock to the system of Liverpool, who'd been the better side for much of the opening twenty minutes and had played the part of favorites well. 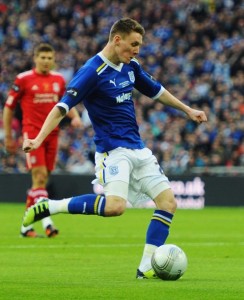 Liverpool responded shakily, with Cardiff still threatening through Mason and few chances to be found while in the attacking third. Just as the nerves had looked to settled after the first few minutes, the Cardiff goal brought them back, with Kenny Dalglish's side showing hints of the self-consciousness that's been so frustrating this season.

Most of their threat came down the left as Cardiff closed up shop, with Stewart Downing and Jose Enrique providing the impetus for most anything positive that Liverpool could muster. Just before the half Liverpool mustered their best chance of the half, as Steven Gerrard floated in a lovely free kick in front of the Cardiff goal, with both Daniel Agger and Martin Skrtel unmarked. The Dane was in front and headed on goal from a few yards out, but it was straight at Tom Heaton, who knocked it down and smothered quickly minutes before the end of the half.

With no changes at the half, Liverpool were tasked with making adjustments with the same personnel and shape. An early free kick gleaned only a poorly-struck Jordan Henderson volley, and at the other end Cardiff once again had a Kenny Miller first-time strike after a back-heel from Don Cowie. Luis Suarez nipped in to steal possession and test Heaton shortly after, but neither that nor the set pieces to follow would give Liverpool any joy.

The introduction of Craig Bellamy for Jordan Henderson on 58 minutes showed Liverpool's intent, and, while the Welshman wasn't involved, they'd have their equalizer within two minutes. Andy Carroll's headed effort from a corner was flicked off the post by Luis Suarez, and Martin Skrtel followed up with a right-footed drive through Heaton to send Liverpool supporters into rapture. It was calmly-taken from the Slovakian defender, who got his fourth goal of the season and his second in as many games.

Rudy Gestede had a decent shout for a free kick at the other end almost immediately, but Mark Clattenburg waved it off, and Liverpool resumed their pressure in search of a winner. Skrtel very nearly had another from a corner, as Charlie Adam's delivery was headed high and the defender hit it well on the volley. Heaton reacted well, though, and got both hands down to save. Cardiff did their part at the other end, first winning a free kick on a Kenny Miller slip near the edge of the area, and next after Don Cowie had acres of space with which to operate on the right, only for his cross to be headed wide of Reina's goal.

Back and forth it went in the final minutes, with Suarez cutting back for Charlie Adam to strike one straight at Heaton first-time, and Kenny Miller wasting a terrific chance after Andy Carroll's intervention forced a rushed shot. Nothing doing for either side, and extra time beckoned.

Liverpool started the extra period in much the same manner as they started the first, only this time we know for sure it would have been a goal, as a Luis Suarez effort in the second minute was cleared off the line. The remainder of the first period had a handful of efforts for Liverpool, with an Andy Carroll header floating wide just before he was subbed off for Dirk Kuyt, and near-misses for Bellamy and Johnson. 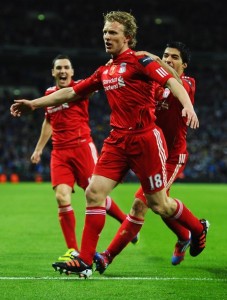 That left all the drama for the second, with Kuyt giving Liverpool the lead in the 108th minute with a wonderful off-balance effort, and Ben Turner punching home the second of two dangerous Cardiff corners (after Kuyt had a goal-line clearance on the first) with only minutes to spare. It was an awful gut punch, and one that would send the match to penalties.

Which was pretty much worst case scenario given Liverpool's awful conversion rate on the season, with only Steven Gerrard proving successful on the year. And yet the captain stepped up first for the Reds and had his shot well saved by Tom Heaton, followed by a Kenny Miller miss off the post for Cardiff. They were both outdone by Charlie Adam, who honestly put in the absolute worst penalty I've witnessed. It barely stayed in Wembley and likely did serious damage to the video board in the fourth deck. Atrocious.

Don Cowie stepped up and netted, and each of Liverpool's next three---Dirk Kuyt, Stewart Downing, and Glen Johnson---would follow suit, with Johnson's proving to be the difference as Rudy Gestede and Anthony Gerrard both missed, with the unsuccessful Gerrard effort setting off wild celebrations for Liverpool, who won their first trophy in six years.

On another day we can look back and be more critical, even though it wouldn't take much effort if we did it now. Many of Liverpool's shortcomings on the year were on display today, despite the fact that we'd hoped the occasion could mask them. But we could just as easily trumpet the performances of Martin Skrtel, Glen Johnson, Stewart Downing, and Dirk Kuyt, all of whom were terrific for most of their time on the pitch. And to their credit, Cardiff could have come away winners just as easily, with a fantastic effort on the day and a performance worthy of acclaim.

Today's not about the any sort of hard analysis one way or the other though, at least for me. It's about Liverpool Football Club lifting a trophy, and being able to celebrate that success. Congratulations to all involved at the club, and let's hope that it helps push everyone on to a strong finish the rest of the way.