Liverpool cruise to an easy victory at Anfield, forcing Brighton into three own goals and getting one apiece from Andy Carroll, Luis Suarez, and Martin Skrtel. A familiar-looking first half gave way to a second that left Brighton badly beaten, and one that assured the Reds would have the chance to face Stoke (again) at Anfield in the quarterfinals of the FA Cup.

With a fairly long layoff between matches there wasn't much of a call for ringing in the changes, with maybe one or two coming into the squad to get a match after extended time on the bench. That came in the form of Jamie Carragher rather than Martin Kelly, though, with the veteran starting in place of Daniel Agger alongside Martin Skrtel, and the Dane left out completely. Kelly started on the bench along with Dirk Kuyt and the recently fit Maxi, with Charlie Adam, Steven Gerrard, Jordan Henderson, and Stewart Downing forming the midfield and Luis Suarez and Andy Carroll in attack. As many have noted, it was the first time that Gerrard, Suarez, and Carroll have started a match together in over a year.

The two sides barely had time to settle in before Martin Skrtel headed home the opener, with Stewart Downing winning the preceding corner kick with a nice move in the box that ended in a deflected effort just over Peter Brezovan's goal. From there it was straightforward stuff, as Gerrard's inswinging corner was met by a shoddily-marked Skrtel, and the Slovakian had his third goal in all competitions on the season.

Brighton settled from there, playing their possession game and trying to work their way forward on the ground. Liverpool weren't in any great hurry, content to soak up pressure and get back in numbers. A few forays to the Brighton end looked threatening, first through a Downing cross, and later from a free kick won by Jose Enrique that resulted in a stray Gerrard effort.

Brighton got their equalizer shortly after that Gerrard free kick, Kazenga Lua Lua winning a free kick of his own from a silly Jordan Henderson foul. From thirty yards it was always going to be speculative, but Lua Lua thundered one past the wall and Pepe Reina at the near post. It was a fantastic strike, one more than worthy of leveling the match.

Liverpool slowly but surely grew back into the match, eventually dominating proceedings as the first half wore on. Luis Suarez had a goal-bound effort cleared off the line by Inigo Calderon, and Andy Carroll's header from a delightful Gerrard cross could only find the roof of the net. 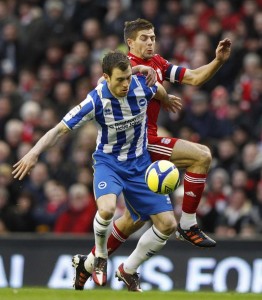 The rest of the first half seemed destined to play out in similar fashion, with possession shared more freely but neither side convincing in attack. But a free kick won on the edge of the Brighton area gave Gerrard a chance, and after his shot was tipped over by Brezovan, Liverpool again took advantage of shaky Brighton defending from corners. This time it was Glen Johnson bundling one off Liam Bridcutt after Luis Suarez had danced through a crowded penalty box.

That they entered halftime with a lead was a nice change to what had started to look like another nearly performance, and starting the second half the biggest question was whether or not they'd be able to create any distance, or if it was destined to be another nervy finish at Anfield.

The guests started with a substitution, replacing Will Buckley with Craig Noone, who impressed at the Amex during the League Cup meeting between the sides, to provide a spark for Brighton going forward. But it was Liverpool who started better, with Jordan Henderson narrowly flicking wide after Steven Gerrard's shot looked to be headed badly off target. Suarez followed shortly after with what should have been the third, but Gordon Greer's intervention, protested angrily by Suarez, saved a badly out of sorts Brezovan.

The third came in what seemed like the unlikeliest of circumstances---good work from Downing on the left, well-placed cross, good movement from Andy Carroll to connect and finish past Brezovan. Anfield didn't quite swallow itself whole, but our matchday thread almost did.

Another Bridcutt own goal left Liverpool well in front, this time from pressure by Gerrard, and an own goal from Lewis Dunk rounded off a slightly surreal day, one that was capped with a Suarez goal even after his terrible spot kick, as he headed in after Andy Carroll played it back across the face of goal from a Stewart Downing cross.

In the interest of full disclosure, I really don't have a sense of how the performance looked with any consistency, as my stream was up and down for much of the match. From what I saw and read, though, this could have very easily been a repeat of what we've so often witnessed at Anfield, albeit against a side who plays a more attractive, stylish game of football.

But the fortuitous second gave Liverpool space, and the third spurred on the confidence that Liverpool's lacked so badly for much of the season. A team that couldn't buy goals in front of their home supporters only a month suddenly couldn't stop them from going in, even if the majority came from the opposition's defenders.

On the whole I'm in dark as to how the squad looked individually; I know that Stewart Downing surpassed expectations and had a hand in more than a few of Liverpool's most effective attacks, and showed some semblance of competence after disappointing so badly for much of the season. Andy Carroll also had a strong showing, getting a goal and setting Suarez up for his, building off a number of improved performances up top. The Uruguayan was lively enough in his own right, showing flashes of his brilliance along with some frustratingly typical wastefulness.

Hard to complain on the day, and while I might add some thoughts after getting a chance to watch the match on replay later tonight, I'm content with Liverpool finding a way to win and doing so in remarkably comfortable fashion. Wins like this---not just in scoreline---have been few and far between for Kenny Dalglish's squad this season, which makes today both relieving and encouraging.

Hope you all have a nice rest of your weekend, and now we can all look forward to next Sunday's final.