The Race For Fourth

Share All sharing options for: The Race For Fourth

To put it as simply as possible, Liverpool need 2.2 points per game over the remainder of the season to finish fourth. They have 39 points and stand in seventh place, while over the past ten seasons it has taken 68 points to qualify for the Champions League. That leaves thirteen games to make up the 29 point gap between where the club is now and where the club felt it needed to be by the end of the season.

So far in Kenny Dalglish's first full season in charge of the club, Liverpool have only managed an underwhelming 1.56 points per game. Certainly it's a step up over the record of the man he replaced last season, as Roy Hodgson only managed a paltry 1.25 points per game in his time at the club. Compared to what Dalglish managed when he took over last January, however, it's a sizeable step down from the 1.83 points per game that over a season would have seen the club finish in the top four six of the past ten seasons. 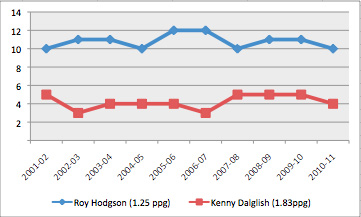 As much as people like to look at the teams around Liverpool in the table, formulating complex routes into the Champions League despite a poor points per game return and Arsenal, Chelsea, and Newcastle all sitting ahead of them, the reality is that the number of points a club ends the season with leads to remarkably consistent results. Based on their performances as manager last season at Liverpool, in every season over the past decade Roy Hodgson would have finished within one spot of eleventh and Kenny Dalglish would have finished within one spot of fourth. Up or down year, there isn't that much variance—and certainly there isn't enough to allow Liverpool to magically sneak into fourth without a massive uptick in points per game before the end of this campaign.

It's also worth considering that the 1.56 points per game managed so far this season by Kenny Dalglish and his heavily overhauled squad is actually worse than the 1.66 points per game delivered by Rafa Benitez in his final season at the club. Those 1.66 points per game, not considered anywhere near good enough by Christian Purlsow despite a depleted squad and a record Premier League points haul the previous season, would have equated to a fifth or sixth place finish most years, with the occasional outlier of fourth or seventh place in seasons where point totals overall in the league were unusually high or low. 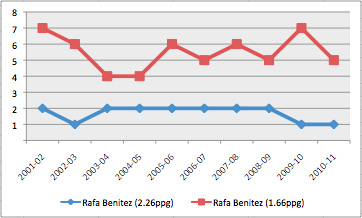 The 2.26 points per game that Benitez earned the season before, on the other hand, would have equated to consistent top two finishes over the past decade—including three Premier League titles. And that's the level of performance Liverpool likely need over the remaining thirteen games to have a realistic shot at finishing in the top four. Because as with the four other points per game tallies we've so far looked at, with one notable outlier the 1.56 points per game managed so far this season is worth a fifth to seventh place finish every year—it simply isn't good enough. 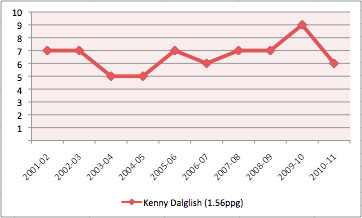 The total number of points it takes to reach fourth has also been a fairly consistent thing, and on current form one of Arsenal or Chelsea would be the pick to grab the final Champions League berth with 65 points from 1.72 points per game. That's just three points and .07 points per game less then the decade average of 68 points to finish in fourth, and with three clubs ahead of Liverpool all battling it out it's hardly a stretch to think that one of them at least could go on a slight run to end the season, thereby setting the bar for a top four finish even higher.

Even if they don't, though, and even if the fourth place side ends with a slightly low 65 points, it would still mean Liverpool would need two points per game over the rest of the season to reach that level. In the end, no matter how you come at it and no matter the convoluted roads to a top four finish that can be conjured up, points per game and how it equates to final table standing is all that really matters—and it's been remarkably consistent over the past decade. Moreover, even the most convoluted route would likely require Liverpool to secure two points per game over the final thirteen games.

That's the reality of where Liverpool stands right now in the race for fourth; that's the challenge the club faces if it wants to make a run. Certainly it isn't impossible, but it's a far, far tougher road than many who look at the table and only see the club four points out of fourth would like to believe.