Share All sharing options for: Manchester United v. Liverpool by the Numbers

Leading up to the match against Manchester United on Saturday, we looked at Liverpool's league games against them over the past four seasons. Given the recent history of the match, a few things seemed clear: One, the home side was going to out-shoot the visitor. Two, the home side would probably take the edge in possession. And three, Manchester United would probably attempt more passes than Liverpool.

The real question was always whether Liverpool would be able to overcome their season-long habit of misfiring in front of goal to finally put away a few of the chances they did create. And perhaps more importantly, there was a question as to whether Liverpool could once again finish the match with more tackles than their opponents.

Tackles was a statistical category they had won in every one of the past seven matches and which had played a key role in Liverpool managing four wins and a draw in those games despite often being out-shot and out-passed. As such, a strong, resolute midfield performance seemed essential to keeping United's quality chances to a minimum and providing a platform for attacking on the counter. And in the past, tackles had provided the quickest, easiest way of measuring just how successful Liverpool had been on that front in any given game. This time around, the answer was clearly not very: Liverpool had fewer tackles than Manchester United for the first time in four years. 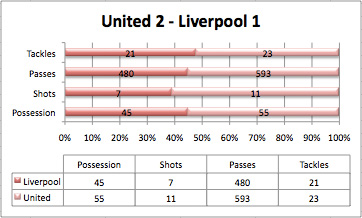 Elsewhere, the story lined up just about as one would have expected going in. Before the match, based on past performances, it seemed likely that the home side would edge possession, shots, and total passes. And that's exactly what happened. In fact, Manchester United's 593 passes—with 522 of them completed—were the most passes attempted and completed by either side over the past eight league games, with United clicking at an impressive 88% success rate overall.

By comparison, though Liverpool still attempted a reasonably high 480 passes in the match—the fourth highest total by either club in the past four years—they only completed 82% of them. Meanwhile both sides were three for 16 on crosses, and though United out-shot Liverpool eleven to seven, preserving a streak that has seen the home side lead the category in every match over the past four seasons, they out-chanced Liverpool by a narrower eight to six margin.

In defence, however, there was a clear departure from what had made Liverpool unusually successful in their games against United in recent seasons. Where before Liverpool tended to have a clear edge, this time around they only took 50-50 challenges by the slimmest 49 to 48 margin. And as mentioned, for the first time in four seasons United edged the tackle game, taking the statistical category by a 23 to 21 margin while the two sides both committed 21 fouls.

United did what they always do well when the two sides face each other, but when it came to tackles and the taking of chances Liverpool quite simply didn't. When it came to putting away their chances they only only converted one of their six compared to United's two for eight—a 17% conversion rate compared to United's 25%. Depressingly, while far from good enough, even this was up from a season average of around 10% that has kept Liverpool hovering in the bottom three in that category.

Looking at the recent games between the two clubs to form a baseline for expectation, United did exactly what the numbers said they would going in. Liverpool, by comparison, didn't do the things they needed to do—and often have done in the past—to counter that. Blame whoever you want, from Suarez to Downing to Spearing to the coaching staff, but any way you come at it Liverpool knew what they were up against. For one of the few times in recent seasons when it comes to Manchester United, on Saturday they simply weren't up to the task.