Share All sharing options for: Manchester United 2, Liverpool 1: A Lack of Class

United get a deserved victory on the strength of a Wayne Rooney brace, taking advantage of a lifeless performance in the second half from a Liverpool side that were wholly disappointing. Given the occasion and atmosphere you'd have expected Liverpool to at least show up, but on the day they lacked any sense of urgency, purpose or desire. The football itself was embarrassing enough, but the conduct on both sides created a match that mostly I'm just happy to see the back of.

Team selection took few of the pre-match headlines, even though there was a relatively significant shift for Liverpool with Charlie Adam, Andy Carroll, and Craig Bellamy on the bench and Jordan Henderson, Luis Suarez, and Stewart Downing returning to the eleven. But that all took a back seat once the teams were paraded and the handshakes began, and Suarez opted to ignore Patrice Evra and shortly after found himself on the receiving end of a snub from Rio Ferdinand. Fuel to an already smoldering fire, and the forced narrative that everyone was moving on was quickly erased, replaced by the assertion that everyone's basically idiotic, petulant, selfish adult babies.

Which unfortunately set the tone for a match that was better ignored than watched, with every action and non-action analyzed and broken down. Neither side were particularly impressive in the first half, with Glen Johnson giving Liverpool their best chances going forward, the best of which came on a left-footed curler after Suarez had done well to switch play to the right flank. Johnson cut in easily past Evra and tried to place it past David De Gea at the far post, but the shot ended just inches wide.

United had only one real chance as well, created during a spell that saw them dominate the final twenty minutes of the first half. Paul Scholes played it wide to Ryan Giggs, and the Welshman's delayed cross found Scholes alone in front of Pepe Reina's goal. The recently unretired midfielder headed straight at Reina, though, who was able to knock the effort down and relieve the pressure.

The break apparently didn't proceed without incident, as reports filtered out that some sort of bust-up had occurred in the tunnel or the changing room, all of which accompanied endless replays of the handshake that wasn't. Whatever happened, its memory was overshadowed by two Wayne Rooney goals in the opening five minutes, and Liverpool were completely sunk.

That the first come on a set piece isn't entirely surprising, but it was disappointing in that it could have been easily avoided. Giggs' corner was curled straight at Steven Gerrard, who likely would have headed clear, but Jordan Henderson's intervention flicked on to Wayne Rooney on the far side, and his volley crashed past Reina for the opener. The second was even more farcical, with Antonio Valencia intercepting all too easily from Jay Spearing and playing Rooney in on goal, leaving Reina no chance once again. 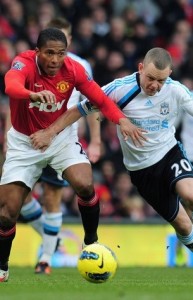 From there it was a complete shambles from Liverpool, who looked disinterested and failed to even try to work their way back into the match. The introductions of Craig Bellamy and Andy Carroll had little impact, and even more disappointing is that their goal, gifted by a flailing Jonny Evans and poked home by Suarez, seemed to provide nothing in the way of inspiration.

They limped their way to the final whistle and looked comprehensively defeated, rousing only after proceedings were wrapped up when Patrice Evra paraded around the Old Trafford pitch, riling up United supporters and finishing his charade only a few feet from Luis Suarez outside the tunnel. It was the perfectly classless and embarrassing way to end a day that couldn't end quickly enough.

On the day there's little to be proud of---the football, conduct, and reactions to it all ranged from mediocre at best to wildly depressing. Aside from one or two competent performances, Liverpool did nothing to improve their stock and only furthered the view that as a football club, they're more relevant for their transgressions than they are for their football. It's obviously not just Liverpool, with Evra shaming himself with his post-match gesticulations and clear efforts to draw more abuse in the direction of Luis Suarez.

I'd love to forget today completely. The innumerable off-pitch headaches that either emerged or continued today make for an utterly miserable day, one that will only serve as another flashpoint in a seemingly neverending nightmare for Liverpool. That a good part of it is self-imposed certainly doesn't help matters.

And even if we try to ignore the circus, today answered few questions, with only Glen Johnson and the Agger-Skrtel pairing emerging as deserving of praise. The rest were sloppy and ineffective, none more so than the absolutely atrocious Stewart Downing, whose confidence has bottomed out along with any hopes of him finding effective form. Few of the regulars were much better, though, and it'd be unfair to lay the blame entirely at the feet of the hapless winger. Liverpool were, in the simplest sense, not any good.

It's not likely to get any better, with the media reaction guaranteed to dissect every piece of today's farce. That'll drive us nuts, and most of it will be overly dramatic or downright untrue. But Liverpool's role in today's failings---both on the pitch and off---can't be ignored.