Jordan Henderson finally managed to break into Liverpool's starting eleven on Sunday and didn't disappoint, turning in another quality performance despite illness both prior to and during Liverpool's win over QPR.

Liverpool's central midfield has struggled of late, with inconsistency and a lack of form afflicting nearly all the principals involved. Joe Allen finally received a much-needed break to the tune of two straight matches starting on the bench, Steven Gerrard has continued his on-again, off-again form with mixed displays, Lucas has shown glimpses of last year's form while working back to full fitness, and Jonjo Shelvey has faded further since starting so brightly through the summer tour and the opening month of Liverpool's season.

The most consistent has been Jordan Henderson, which would seem impossible to people who never watch him play or are stuck on a narrative that's defined by the price tag that brought him to Liverpool rather than what he's done since arriving, particularly over the past two months.

No longer jammed into a role on the right, Henderson has excelled when given opportunities in central midfield, and against QPR on Sunday he continued his positive trend of late by fighting through illness to turn in another quality performance. Placed in a slightly more advanced role he excelled, displaying the workrate we've come to expect while also appearing more confident. There are few in the squad that are as good on the first-touch in distribution, and although the assist for the opener is a little generous--Luis Suarez did all the work and more--Henderson provided a number of cutting passes and showed good vision in trying to spark a Liverpool attack.

He also gave us one of the better moments of the first half, nicking possession away from Gerrard and pushing play to the left, which brought about a wonderful flailing tantrum from the captain: 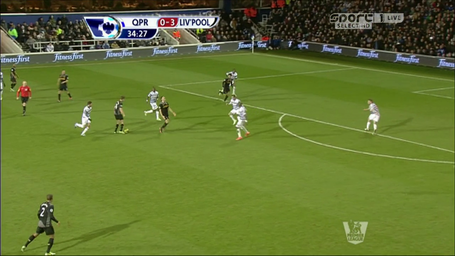 Nevermind the four defenders between Gerrard and goal and the fact that the run by Suarez to the center drags a defender and leaves a gaping hole down the left that Henderson exploits, because...STUFF!!!

He's far from a perfect player, and there's a point at which he desperately needs to improve his ability in the final third. And some are still hung up on the lack of fireworks every time he goes in for a tackle; he's no lightweight, but there's not the explosion that some expect a true full-blooded British midfielder to produce, even if he's capable at winning back the ball without taking a shinbone with it. He needs polishing, just as any 22 year-old does, and has to show that he can have a positive impact on a consistent basis.

So yes, there's plenty left to be done. But Jordan Henderson is not a player Liverpool can really do without. At current, he's the club's best central midfielder, and he deserves to be in the conversation as one of the first names on the team sheet, not as someone who's leverage to finance a move for someone else. Hopefully chances and form continue, and he's able to build off what's been his best string of performances in a Liverpool shirt.