Liverpool on Form for Worst Season Since 1954 (Again)

Last season, Kenny Dalglish guided Liverpool to their worst record in the top flight since being demoted from it in 1954. With the current season at its halfway point, Brendan Rodgers is on pace to break that mark and set a new low in the modern era.

Share All sharing options for: Liverpool on Form for Worst Season Since 1954 (Again)

One week, Liverpool look impressive and fans, players, and even the manager can begin to entertain dreams of a top four finish. The next, Liverpool are so poor relegation seems the more likely final destination. And somewhere between the two extremes is a Liverpool side so uneven both in performance and result that it does no good to look at any one game in isolation. Instead, the only way to meaningfully read the side's performance and progress under Brendan Rodgers is to look at three games, or six games—or, now that the season is half over, nineteen of them.

Now, with half the season gone for Liverpool Football Club and their latest manager, the picture begins to grow clearer. Unfortunately for all involved, it isn't picture that's very encouraging. Unfortunately for Rodgers, managing director Ian Ayre, and all at Fenway Sports Group it's a picture of 1.32 points per game and a club on pace to set a new record low points total in the top flight since Liverpool were demoted in 1954—a year after Kenny Dalglish set the current record low—while the quality of the team's performances swings wildly from week to week.

In recent games, against the supposedly weaker portion of their schedule, Liverpool have failed to find any semblance of consistency or progress. They outplayed Tottenham for long stretches in a losing effort, eked out a narrow victory over Southampton that was far tighter than it should have been, were terrible for most of the match against West Ham yet managed to take all three points, looked painfully lifeless against Aston Villa, appeared dominant in the extreme against Fulham, and were easily handled by Stoke. Fans won't have expected miracles from Rodgers, but most would have expected genuine signs of progress by the time December rolled around—and the inconsistency on display instead has been anything but.

At the end of the day, Liverpool's wildly inconsistent play is the hallmark of a mid-table side, and given the weaker schedule they've faced over the past six weeks one cannot even be certain if the slight improvement in form of late is the result of Liverpool improving rather than of their opponents getting worse. And either way, that improvement has been far from overwhelming: In the eight matches since November 17th when Liverpool beat Wigan a week after drawing with Chelsea, they have managed 1.65 points per game. That equates to 63 points over an entire season—not even enough to qualify for the Europa League last year.

Certainly the thirteen points earned over the past eight matches is an improvement on the measly twelve—or 1.09 points per—Liverpool recorded in the first eleven games. Yet those first eleven games saw the club face Chelsea, Manchester City, Manchester United, and Arsenal at a time when Rodgers had the added easy excuse of installing a new system to help explain away any poor results. Together with the odd encouraging performance it meant many fans remained hopeful the manager could turn things around once players began to adjust to his ways and the opposition grew easier.

Unfortunately, 1.65 points per game over the past six weeks and a string of wildly inconsistent performances is still a long, long way from convincingly turning anything around. And even given the excuses of a weak squad and implementing new ideas, this is not a Liverpool side that should be struggling along at 25 total points and 1.32 points per game overall after half a season. Worse than the poor results, though, might be those inconsistent performances, as a less than hoped for position in the table would be far easier to accept if it was paired with signs of consistent improvement. Sadly, any such signs remain absent.

Liverpool quite simply aren't good enough, and they haven't been good enough all season under Rodgers. And worst of all is that the past eight games against the supposedly weakest portion of the club's schedule haven't shown the meaningful and consistent signs of progress most had been holding out hope for. Rodgers, meanwhile, appears incapable of addressing personnel and tactical issues that have plagued his side since August, while he and the owners prepare for a January set to lead off with a pair of signings that could be considered speculative at best and a reckless continuation of failed transfer policy at worst.

None of which is meant to wholly damn the man—many of Liverpool's failings are, after all, not of his own making. Yet it's become painfully clear that even given the club's many shortcomings when it comes to the playing staff and senior management meant to support him, Rodgers' first six months on the job haven't delivered the hoped for results. Liverpool may be a club weakened by years of mismanagement, but when a loss against QPR on Sunday would give Rodgers the exact same record that saw Roy Hodgson fired two years ago it becomes impossible to entirely absolve the manager of blame no matter that the situation is far from ideal.

There may still be time for Rodgers to turn both his and the club's fortunes around, but few would have imagined six months ago Liverpool would end 2012 once again on pace for their worst finish in the top flight since they were demoted from it in 1954. Even for those who continue to believe Rodgers is the right man for the job there is no silver lining to be found in that, not when results and performances remain frustratingly inconsistent and signs of progress are invariably matched to moments of regression. 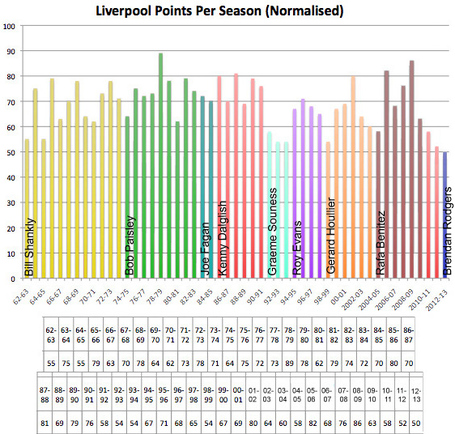 Note: Points totals have been normalised for three points per win and a 38 match season.