From a Villa perspective the goals that gave them a two-goal lead were terrific, but on the Liverpool side of things it'd be hard to argue that enough was done to prevent the visitors from finding the net.

After the opening fifteen minutes or so, Liverpool shut off and relied on the lack of final ball from Raheem Sterling and an absent midfield to try to get the victory. That turned out to be a somewhat less than effective strategy as they conceded three and looked about as indifferent as they have all season. Brendan Rodgers was right to condemn his side's effort in a post-match presser that thankfully left out much of the hyperbole that's glossed over significant problems throughout the season.

Of particular worry is the manner in which Liverpool allowed Villa's goals. Again, take nothing away from Paul Lambert's side, who would have been hard done by if they came away with anything other than three points, but Liverpool's defense was horrifyingly soft on each. The third was something out of FIFA, with Christian Benteke sauntering through a non-existent defense to slot past Pepe Reina unchallenged.

The first two weren't much prettier but were at least a little less straightforward, so we might as well relive the misery in an effort to turn said misery into downright depression. 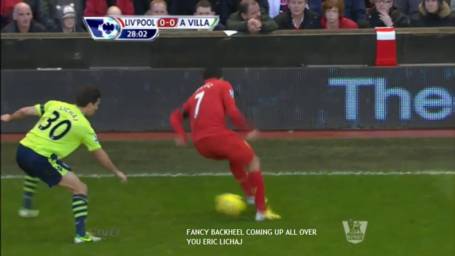 Luis Suarez has possession near midfield with space in every direction but forward, so naturally he tries to find a way to go forward. He does nutmegs, haven't you heard? 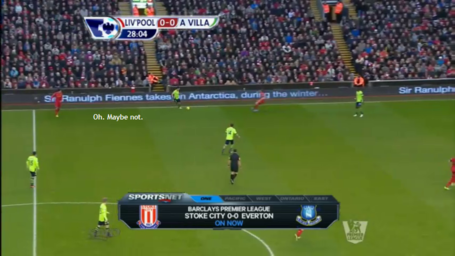 Unfortunately going forward did not turn out well. Still, Liverpool aren't exactly in crisis mode, at least insofar as Liverpool can be out of crisis mode at any point over the past three seasons. A giveaway near midfield isn't a disaster, unless you're Steven Gerrard, in which case it's a sure goal. Also apparently Luis Suarez now. 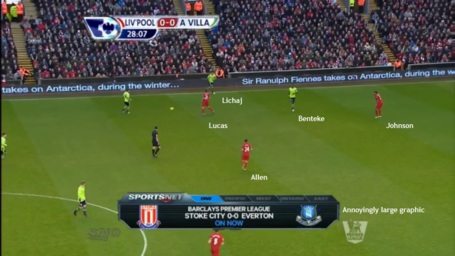 This isn't quite yet an awful spot for Liverpool to be in--they've got a fairly set defensive shape at the back, and while Lucas is pushed further on Villa's left, Joe Allen and cover centrally with Steven Gerrard trailing the stoic Barry Bannan. But as we've learned with Liverpool, never underestimate the potential for the straightforward to turn into balls-out catastrophe. 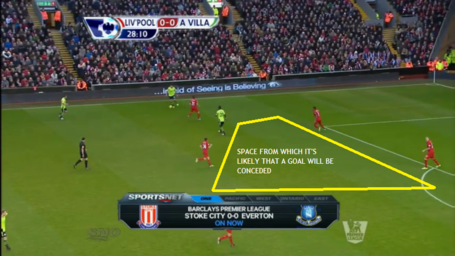 Lucas continues down Villa's left, and a decent amount of space opens up for Benteke. That won't be exploited immediately, but soon enough he'll have time and space in possession. 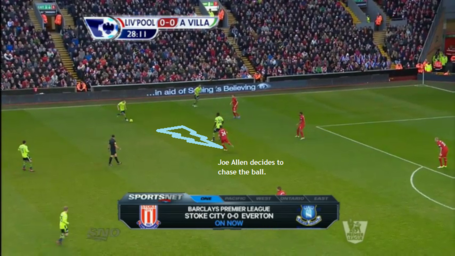 For a moment the space looks to have collapsed, as Villa pass back out rather than push forward. Joe Allen shadows Benteke closely, but at the critical moment he decides to chase the ball--which is in possession forty-odd yards from goal--rather than stick with the Belgian forward, who's got yards of space behind him if Allen vacates. 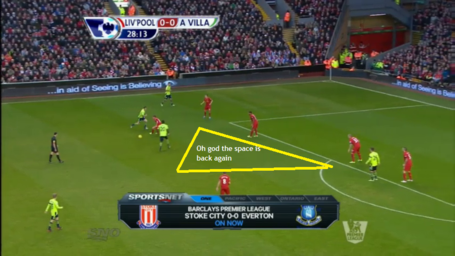 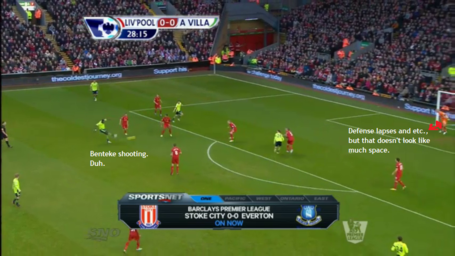 Benteke opens up from about twenty-five yards, with Allen trying to recover and none of the other Liverpol defenders close enough to cause him problems. That he beats Pepe Reina at the near post is somewhat confounding, though, as there weren't any deflections and the goalkeeper looked tuned in. Maybe he gets wrong-footed, but all-in-all, not the best effort from Liverpool's defense as a unit. 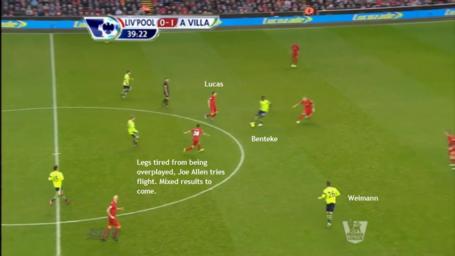 A benign-seeming passing move gets Aston Villa possession moving into the Liverpool half, and with only Benteke and Andreas Weimann in attack, it doesn't look like the most dangerous thing on Earth. It's Liverpool, though, so stand by. 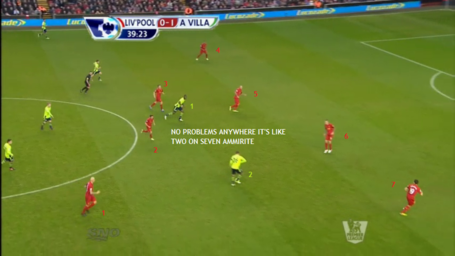 I mean look at this--good shape across the back, Lucas and Allen in pursuit, Jonjo Shelvey trailing play towards Villa's right. Liverpool have ably handled similar threats on numerous occasions this season, and while they were shaky earlier, there was nothing to indicate a complete collapse. 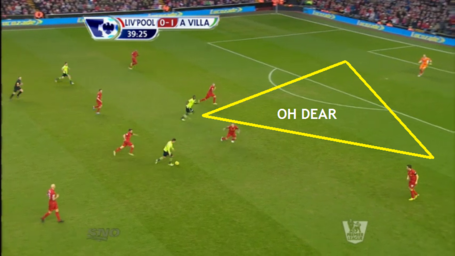 Well that turned bad rather quickly. Lucas fades, Agger closes on Weimann, and Downing backtracks to the touchline to mark...the touchline. 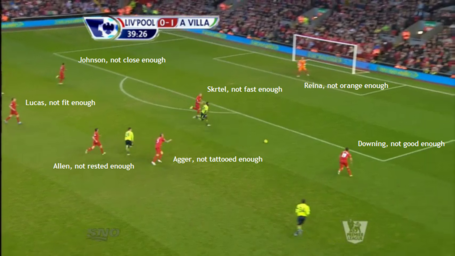 Here's where everything goes to pot, with Allen starting to shut off, Agger too committed, and neither of Skrtel, Downing, or Reina able to intercept Weimann's pass. Still not a surefire goalscoring opportunity, but what happens off the ball means that a perfectly-placed pass from Benteke would leave Weimann alone in front of goal. 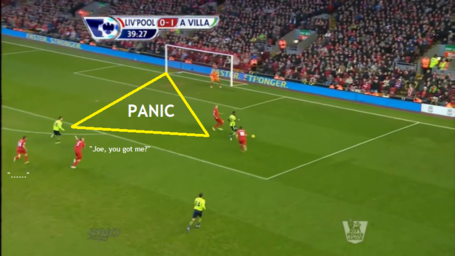 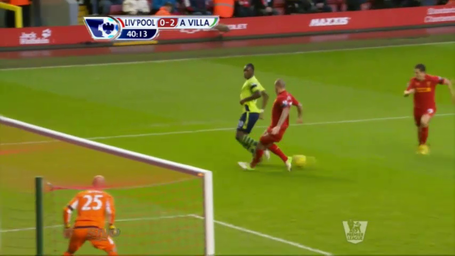 This was just pretty. 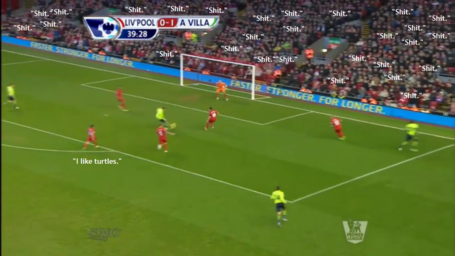 Joe Allen, a full eight yards behind the man he was tasked with marking, and really no chance for Liverpool to not concede. One of the prettier goals I've seen the opposition score this season, but looking at the principals involved on the Liverpool end, something that was, as mentioned before, entirely preventable. Tired legs and tired minds don't do much in terms of convincing on either end of the pitch, and today it was most notably at the back end. Further spacing between the fixtures might help, but Brendan Rodgers needs to consider other options--ones that give Liverpool the solidity they require if they're going to consistently perform at the level that's needed to start to get results.