It's finally the scoreline we were waiting for, but a lackadaisical first half and an incident late in the second take some of the sheen off for Liverpool, who worked their way past Oldham on the strength of a terrific display by Craig Bellamy. The visitors started brightly and were the better side for much of the opening period, but a strong second half performance sees Liverpool rebound from the loss at City earlier in the week and progress to the fourth round.

Kenny Dalglish opted to go with the back line we all knew was coming, with Fabio Aurelio declared alive and Martin Kelly, Jamie Carragher, and Sebastian Coates making the starting eleven since the win over Chelsea at Stamford Bridge. It was slightly surprising to see Pepe Reina chosen ahead of Doni, who's seemingly not going to see any action this season, as well as that Dalglish picked a midfield with both Steven Gerrard and Jonjo Shelvey. The latter pushed forward with the captain in the middle alongside Jay Spearing, and Dirk Kuyt, Craig Bellamy, and Maxi rounded out the squad up top.

It was an eleven stacked with attacking talent, but for much of the early going it was Oldham who provided the match's action. Liverpool looked disjointed and couldn't string anything together, and the visitors took advantage, getting forward confidently and piecing together a handful of dangerous possessions. Hopes that Liverpool would push on early were quickly swept away as they had to sink back to ward off Oldham pressure.

Most of the guests' early chances came as a result of faulty Liverpool defending, with neither Carragher nor Coates provided much solidity across the back. Shefki Kugi created the best chance of the opening ten minutes, slaloming both central defenders and narrowly missing at Pepe Reina's near post, and a free header for Tom Adeyemi followed shortly after, flying just wide of the top corner. 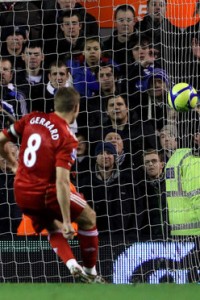 Liverpool countered with a few half-chances but still struggled to make their mark on the match, and aside from a Dirk Kuyt header on Craig Bellamy's darted free kick, the hosts were easily second-best. Oldham concretized that feeling with the opener in the 28th minute, with Robbie Simpson blasted a left-footed half-volley past Pepe Reina. It was a deserved reward for an Oldham side that, to that point, had taken the match to Liverpool.

It was a little harsh, then, that Liverpool equalized so quickly after Simpson's stunner. Jonjo Shelvey shot from the edge of the area, and the deflection off Bellamy left Alex Cisak with no chance. The leveler spurred Liverpool on, as chances for Maxi and Shelvey followed in quick succession, with only the midfielder's shoelaces to blame for not having the lead sooner.

That would come just before the half, though, as Adeyemi bundled through Maxi in the Oldham box after a dinked cross from Steven Gerrard. It's no secret that Liverpool have struggled from the spot this season, with five chances and four misses adding to an already abysmal record of converting chances. None were taken or missed by Gerrard, though, and he blasted into the top corner past Cisak (off the bar, no less) to put Liverpool on top.

The match was Liverpool's for most of the second half, with Craig Bellamy marauding down the right flank and providing service for anyone willing to get on the other end of it. Jonjo Shelvey finally stepped up in the 68th minute to give Liverpool some breathing room, getting his first goal for the club after he and Gerrard found their way forward awaiting another Bellamy cross.

Breaking up the rest of the Liverpool scoring was a strange incident with Tom Adeyemi---the midfielder set up for a throw-in on the far side, and he was apparently confronted by Liverpool fans in some way. He was clearly upset by the incident, which delayed the match for a few minutes as players from both sides tried to calm him. Speculation instantly flew to the worst-case scenario, but as of writing there's still no confirmation as to what exactly happened.

Late goals for substitutes Andy Carroll and Stewart Downing put some gloss on the win, and it's on to the fourth round for Liverpool.

As I mentioned, it's mostly hand-wringing and breath-holding until there's any sort of solid account of what happened with Liverpool supporters and Tom Adeyemi. Enough media's gotten a hold of the story that there's enough variations to make your head spin, many of which reflect poorly on the club after a month that's seen more than its share of controversy. That makes it a bit difficult to fully enjoy the win, even if the consequences for any sort of abuse---racial or otherwise---from a supporter seem fairly clear-cut. Our stance has always been that there's no place for racism in football or society, and any chance to punish proven offenders of such abuse should be taken, no questions asked. 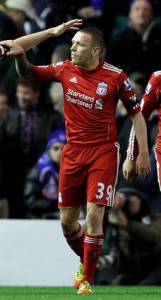 So it's with that in mind that we celebrate tonight's masterclass put on by Craig Bellamy in attack, a full ninety minutes for one Steven Gerrard, and another comeback effort from a relatively piecemeal Liverpool squad. Jonjo Shelvey made his presence known, playing well enough to merit discussion about his place in the eleven on a more consitent basis. Andy Carroll only featured for seven minutes but managed to thump home a left-footed effort from distance, and Stewart Downing *finally* got himself on the scoresheet with a fine volley. Fabio Aurelio, as rusty as he looked, does in fact have a pulse.

The effort in the first half was worrying, however, and I can't imagine that having so many different moving parts helped. Aurelio hasn't featured with anyone nearly all year, and Carragher and Coates clearly suffered from the lack of match action. And for as much attacking impetus as the front six provided, there was little to shout about in the passing game and even less in front of goal. Having a match taken to them by lower-league opposition at home, while unfortunately not an entirely foreign concept, is never an encouraging sight, and much of the first half simply wasn't good enough.

But in the end they righted the wrongs on the day and got the win they needed, and they'll have something to build off of heading into next week's semi-final at Manchester City.