Manchester City make the gulf in cutting edge clear at the Eastlands, putting three past Liverpool and pushing themselves ahead at the top. Liverpool looked good for spells, particularly between the first and second City goals, but couldn't do anything with their possession and scarcely threatened Joe Hart's goal. And while it wasn't one of their worst performances, it certainly wasn't their best, leaving little reason to think much will be different in the new year.

That sentiment was confirmed with the announcement of the team sheet, which came less than an hour after the club decided to release a statement on their decision to accept the ban for Luis Suarez. The timing was somewhat strange, but it was met with mostly positive reactions, with many hoping to move on from what's become a constant distraction. The status quo was maintained with the inclusion of Charlie Adam in a midfield that also had Jordan Henderson and Jay Spearing, as well as with Stewart Downing wide. He would start left given the inclusion of Dirk Kuyt, though, and Andy Carroll would start alone up top in a formation that looked something like a 4141.

It all started well enough for the guests, who had just as much possession as their hosts and managed to push forward with intent. They got their best chance of the match inside of ten minutes, with Jordan Henderson playing Stewart Downing through with a perfect first-time ball. The onrushing Downing was one-on-one with Joe Hart, but he couldn't find a way through to goal, with Hart saving the straight-on effort well and Liverpool's threat extinguished. 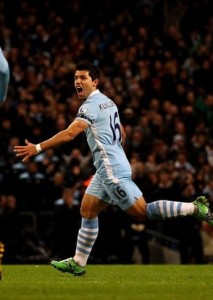 Downing's inability to convert would be punished almost immediately at the other end, as Sergio Aguero gave City the lead on a shot that never really should have happened. Dirk Kuyt had possession on the edge of the middle third, but rather than pass off or clear, he tried to jink his way upfield. He was quickly dispossessed, however, and David Silva's pass found a streaking Aguero, who tried one from distance. The dipping shot looked as though it should have been saved by Pepe Reina, but it ultimately squeezed past him and into the net.

Despite going down, Liverpool responded well and continued to get forward, and looked as though they'd have a clear chance to pull level. Charlie Adam's free kick in the 24th minute tested Hart, and Jordan Henderson tested from range only to pull wide. Still no cutting edge, but the consensus seemed to be that if Liverpool could manage to keep it close, they'd eventually find a way through, particularly with Steven Gerrard, Craig Bellamy, and Maxi available on the bench.

Two quick City corner kicks changed all that, though, as Vincent Kompany first forced Pepe Reina into a reaction save after beating his marker, and Yaya Toure then headed home the resulting corner to put the hosts two up. It was dire marking from Liverpool, with Glen Johnson giving Toure far too much space in the box. Liverpool would try to respond before the end of the half, most notably through a goal-bound Dirk Kuyt shot that Kompany blocked just in front of Hart.

The second half was more of the same, with Liverpool carrying most of the possession but creating little. The introductions of Gerrard and Bellamy were a clear effort to change that, but neither gave the visitors the impetus they needed. Gareth Barry's dismissal in the 73rd minute after a second yellow provided a glimmer of hope that was quickly erased when Yaya Toure fell over Martin Skrtel on the break, giving City a penalty that James Milner crashed into the top corner and cemented the three points for the home side.

I guess we can agree that the performance from Liverpool wasn't a complete abomination, and that the scoreline might be overly harsh. On the day Liverpool didn't embarrass themselves or capitulate entirely, which would have been easy enough against such quality opposition. But in many ways it was a maddening display from Kenny Dalglish's squad, who at times looked so impotent that it was clear they just weren't going to score. Possession is nice to talk about, and I suppose you could say Liverpool dominated in that regard, but what's the point if none of that possession poses any threat whatsoever? 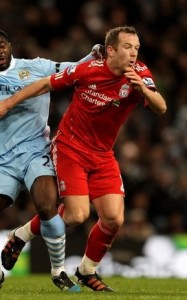 It's easy to point to Andy Carroll as one of the biggest offenders, but I don't see any point in criticizing an anonymous performance that was only made worse by the lack of service and support. At times he was alone in a sea of light blue, struggling against the excellent Vincent Kompany and shadowed all the way into his own half. Rare were the occasions that he actually had the time, space, or options to do anything meaningful---on one of the only attacks in which he had support, he headed down for Dirk Kuyt, who would have had a goal were it not for Kompany.

More deserving of criticism are Charlie Adam, Stewart Downing, and Dirk Kuyt, all of whom brought little to the match and were unable to get involved in anything positive. For Adam and Downing it's an all too familiar pattern, while it's a little surprising and a whole lot of disappointing that we didn't get a vintage Kuyt performance. And for all the good he's done in adding to Liverpool's stalwart defense, Pepe Reina made another error to let in the opener, and in a cruel reminder of his own club's profligacy, crashed his frustrated post-goal punt off the post.

The match wasn't without signs of encouragement, though---Jordan Henderson and Jay Spearing did all that was asked of them and more in the midfield, with the latter working tirelessly any time the hosts were in possession. The scoreline belies a statement that the back line was as good as they've been, which they weren't, but they were still competent and composed against a talented City attack. That they were without the cover of Lucas likely played a significant role, but that statement's true all around.

At least there's not too much time to wallow, with Oldham visiting Anfield on Friday and another trip to the Etihad on tap for next week. We're going to get a few different looks at Liverpool's personnel in the coming weeks, so let's hope that they find something a little more inspiring than what we saw today.