Liverpool 2, Manchester United 1: The Man for the Big Occasion

Share All sharing options for: Liverpool 2, Manchester United 1: The Man for the Big Occasion

Liverpool progress past a Manchester side in a cup competition for the second time in four days, this time defeating United on the strength of a late Dirk Kuyt winner. After the nadir at Bolton, it's been a terrific week for Liverpool, first reaching the final of the League Cup with the aggregate win over City, and now fighting through a tense match that was dominated at times by the visitors to get the win in the dying moments.

With five defenders in the team sheet, most were left wondering how exactly Kenny Dalglish would organize his side---Jamie Carragher accompanied Martin Skrtel and Daniel Agger in the eleven, along with Martin Kelly and Jose Enrique. Most, myself included, assumed it was a variant of what we saw against Stoke, but it was immediately evident that Carragher was pushed further forward as a defensive midfielder. Ostensibly it was to give Liverpool three in the middle, with Steven Gerrard and Jordan Henderson in the middle of Stewart Downing and Maxi on either flank, and Andy Carroll alone up top.

And the opening was mostly as advertised, as both sections of supporters were in full voice and both sides scrambled frenetically around. Neither side were particularly impressive, with Maxi's shot from distance, which David De Gea saved well, the only real moment of quality in the opening ten minutes. Antonio Valencia nearly gave United the lead with a driving run through the left side of Liverpool's midfield and defense, only for his dipping shot to ricochet off the far post after beating Pepe Reina.

The hosts responded immediately, surging forward and winning a corner off Jose Enrique's long-range effort. A Liverpool corner earlier in the match gave us a glimpse of their intent to rattle the self-conscious United keeper, and this time it paid off, with Andy Carroll occupying De Gea, Jonny Evans, and Antonio Valencia, allowing Daniel Agger to burst over the top and head home the opener.

A brief spell followed in which Liverpool stayed on top, but they gradually regressed into their own half, providing United plenty of time and space on the ball and leaving Andy Carroll as the lone man at the other end. Their pressure paid off on forty minutes, with Enrique caught flat-footed and a streaking Rafael cutting one back from the touchline for Park Ji Sung to crash home. It was a swift move and a well-struck finish, and it looked as though United would add another prior to the halftime whistle.

Thankfully the break came with the score level, but the visitors picked up where they left off, pressing Liverpool and conceding little possession. Things opened up significantly as the half wore on, first with Andy Carroll scuffing a shot off Chris Smalling and Danny Welbeck timing a perfect run and rounding Pepe Reina at the other end with only Martin Skrtel left to save Liverpool from going a goal down.

Dalglish opted to make two changes just after the sixty minute mark, both of which couldn't have come sooner. Jamie Carragher and Maxi had both been passed by completely, with the former providing little in an adapted midfield role and the latter sparking the stoppage prior to their substitutions with another dangerous and poorly-executed tackle. Craig Bellamy would follow ten minutes later for Steven Gerrard, who was likely fatigued after featuring for the entire match on Wenesday. 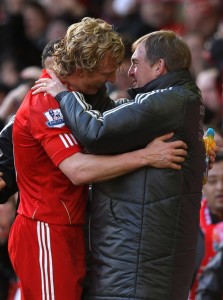 The final minutes were Liverpool's, and the winner came in the most direct manner possible, as Pepe Reina's long goal kick was headed into space for Kuyt only yards from goal. The Dutchman composed himself and blasted it past a helpless De Gea, and Liverpool had their second result over a Manchester side at Anfield in a matter of days.

As much as we might want to, we can't talk about this one solely in terms of the football, even if it finished so well. The booing of Patrice Evra lasted most of the match, the away supporters were heard chanting about Hillsborough on multiple occasions, a Liverpool fan was photographed making monkey gestures towards Evra, and reports trickled out about United supporters taken into custody for spitting on the Hillsborough memorial outside the stadium. At times it felt like the match was best viewed through small cracks between fingers, with healthy doses of dread accompanying the excitement the football brought with it.

In that regard there are plenty of questions left off the pitch, and hopefully in some way both clubs find a way to address the volatility that so often feels as though it's about to bubble over. That it'll happen prior to Liverpool's visit to Old Trafford in two weeks is far too optimistic, but we can hope.

As far as the actual match, it was up and down from a Liverpool perspective, with the early confidence mostly erased by United long stretches on top. But they survived nearly everything the guests could muster, and aside from a couple of nervy moments for Reina outside of Park's goal, United were unable to seriously challenge Liverpool's goal. No surprise that stalwart efforts from Martin Skrtel and Daniel Agger were at the heart of that, and Martin Kelly put in a very good showing on the right.

The midfield was better without Jamie Carragher than they were with him, but it'd be unfair to harshly criticize the man for being asked to fill a void. Steven Gerrard and Jordan Henderson were solid further forward, with Henderson pushing up in attack late in the match and Gerrard lasting as long as he could muster. Charlie Adam came on to positive effect, and Stewart Downing had another strong showing despite shitting out of more than a few challenges.

Most impressive on the day for me was Andy Carroll, and I'm not really concerned as to whether or not that's down to the fact that he's been so poor so often. He was lively from the start, clearly heeding the words of Dalglish post-Bolton, and worked the United defense all day long, often doing so completely in isolation. That he won the header that led to the winner was a justified reward for one of his strongest displays in a Liverpool shirt. And that it fell to Kuyt was the icing on the cake---a man previously struggling for form and influence, he was vastly better against City than he had been all season, and today he's a match-winner.

So overall, today was a mixed bag, with plenty of reports of regrettable and embarrassing behavior to emerge on both ends as the day progresses. And while can't ignore that, left to hope the parties responsible are held accountable for their actions, we can celebrate a week that saw Liverpool, as a football club, start to follow through.