After months of praise for being one of the best defensive units in the Premier League, Saturday's game against Bolton saw Liverpool's normally stout defensive line concede three against the side with the worst home record of any club in the seven leagues that make up the top end of the English footballing pyramid. This, one would infer, is not an especially good thing. However, the bulk of any blame to be laid for Bolton's two goals from open play should be reserved not for the defenders but instead for the midfield duo of Steven Gerrard and Charlie Adam, who put in an even worse performance than in the fall against Norwich when Lucas was forced out through suspension. Without further ado, then, on to Saturday's ugliness: 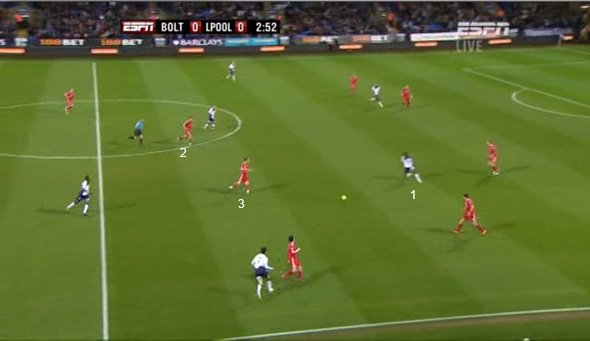 In the buildup to the first goal, Chris Eagles plays the ball into space towards Muamba (1), but his pass is too far behind him and runs through to the middle of the park where one would expect Jay Spearing or Lucas Leiva—were they available—to easily mop up the misplaced ball. Gerrard and Adam (2 & 3), however, are both trotting back from the attacking half at half-speed. That both had been beyond the half-way line when Bolton gained possession might have made sense had Liverpool had control of the ball and lost it suddenly. Instead, Bolton had just gained possession off a Reina goal kick that went directly to them. 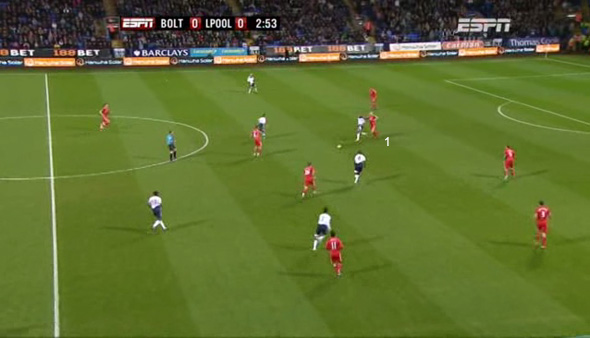 With no midfielder close enough to lend a hand, Martin Skrtel is forced to press out, following David NGog (1) as the striker drops back into the deserted space between Liverpool's defence and midfield to collect the loose ball. In the immediate aftermath, some might have questioned Skrtel allowing himself to be dragged away from his position at centre back, creating the hole that Bolton would exploit immediately, but without midfield support he had little choice. 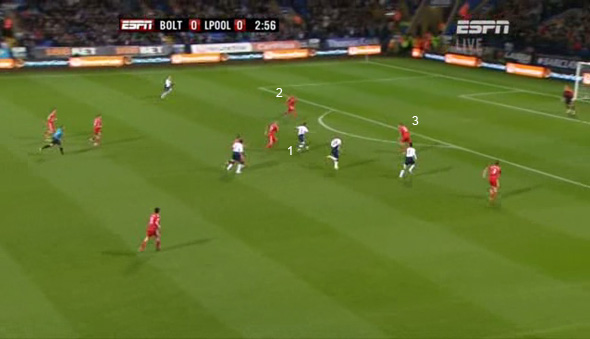 NGog smartly flicks the ball on to a charging Mark Davis, who runs into space with Skrtel close behind. He evades Skrtel's hesitant nibble from behind—the Liverpool defender careful to avoid being penalised—and the late closing by Johnson and Agger (2 & 3) before passing the ball past Reina into the bottom corner. Worried about maintaining cover on his own man, Agger being slow to close appears far more forgivable in retrospect than it did at the time—just as Skrtel pressing out on NGog seems the right move in the circumstances.

If one needs to find a member of the back four to blame for the goal, then, the easiest might be Johnson, slow to react to the space left behind Skrtel and without a nearby player to cover. However, in the end, the true problem lies in neither of Liverpool's midfielders reacting quickly enough to Bolton's threat. Given their positioning in the lead-up to the goal and how much space there was for NGog to drop into to collect the misplaced pass, the goal had the appearance of one scored on the break after a sustained spell of Liverpool possession in the final third. That this wasn't in fact the case makes both Liverpool midfielders being so far up the pitch and slow to get back even more damning when even one of them trailing the play until it became clear whether or not Reina's long kick—always a toss-up when it comes to maintaining possession—was collected by a Liverpool player or immediately went to Bolton. 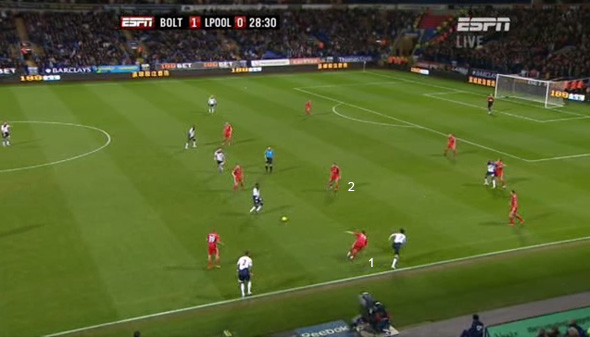 For the second goal, both sides are pushed far to Liverpool's left when Chris Eagles plays the ball inside to Muamba and blows past Charlie Adam (1) while Gerrard (2) takes on the shielding role in front of defence. 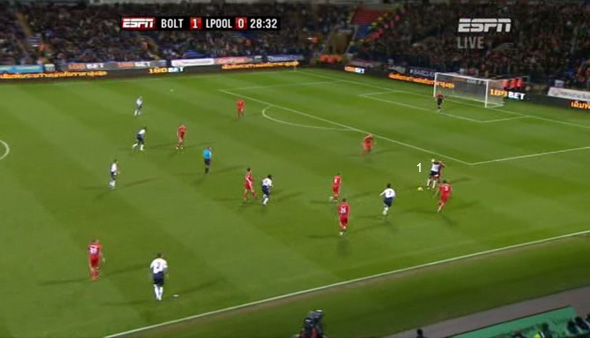 NGog again plays a key role in the buildup, holding up play with his back to Agger (1) and cushioning the ball back to Eagles while Gerrard is slow to react and Adam hardly moves at all after being beaten moments earlier. 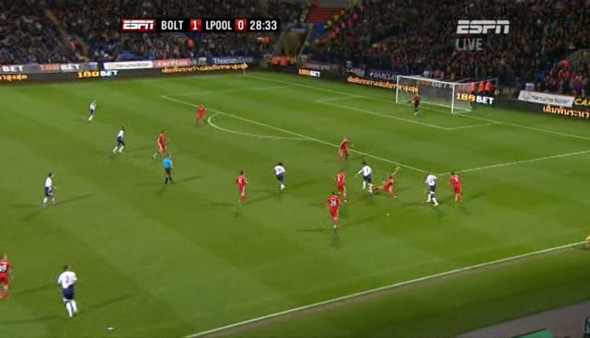 Eagles skips past Agger's desperate sliding tackle while Gerrard pulls up, like Adam no longer chasing the man now that he is clearly on the wrong side of him. 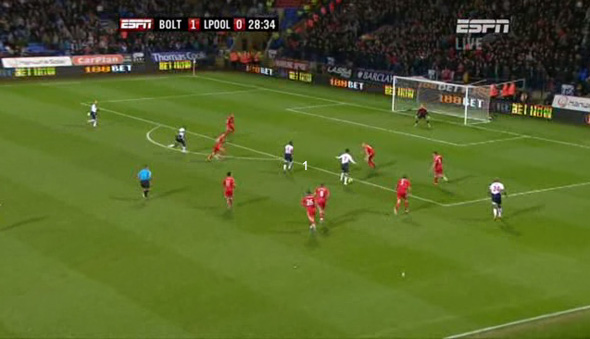 Skrtel is faced with two attackers and does his best to cut off Eagles from goal while positioning himself to cover Reo-Coker should the ball be played square (1). His effort to defend both of Eagles' most likely options deserves praise, as it forces the Bolton player to loop an ugly aerial pass towards Reo-Coker that the Bolton player takes on his chest awkwardly but still manages to put past Reina after Liverpool's two central defenders were outnumbered by NGog, Eagles, and Reo-Coker on the edge of the penalty area when both Adam and Gerrard were beat easily by their men and then failed to put in nearly any effort to get back into the play.

Perhaps Liverpool's players didn't respect Bolton enough, and perhaps both Gerrard and Adam doing such a poor job in defence reflects that the players didn't respect Bolton's potential threat, but expecting Gerrard and Adam to be able to effectively cover the defence as a midfield duo is in itself a tactical choice that implies a lack of respect for Bolton. True, many watching were pleased by the teamsheet when it was released, but much of that was based on an expectation that Adam, Gerrard, and Henderson would be deployed in a tightly-packed three-man midfield—hardly a defensively dominating selection, but likely the best Liverpool could do in the circumstances. In the end, just as lining up Gerrard and Adam as a duo was a mistake against Norwich that led to the Canaries' equaliser, so to was sending them out against a side that on home form Liverpool would have expected to beat easily.

On both occasions, Liverpool was handed a hard lesson that there is no such thing as an easy opponent; that it is not only the likes of Chelsea and Manchester United against whom it pays to have a defensively conscientious presence anchoring midfield. Liverpool has escaped this lesson with at least a point to show for it before this season, allowing a focus on missed opportunities in the final third when it comes to determining who and what is to blame for dropping points. This time around, the lack of respect from Liverpool's players and coaches evident in both the midfield set up and performance is nearly impossible to avoid. It will be interesting to see if, this time around, any lessons are actually learned.