Fabio Capello Has a Favorite Topic, and Other Tuesday Notes

Share All sharing options for: Fabio Capello Has a Favorite Topic, and Other Tuesday Notes 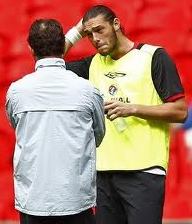 It's no secret that one of our favorite pastimes around here is drinking. Whether it's in an attempt to cope with the punishing reality of last fall or to celebrate any and all of life's little wonders, a nice drink is something to be enjoyed and cherished, often in large quantities. Our regulars seem to have embraced this ethos, churning out some remarkably coherent and insightful stuff while reportedly tipping back man's finest creation. We're all for responsibility and smart decision-making, and would never encourage any dangerous behavior, but we also don't want people to be boring and stuff.

So in a roundabout way we find ourselves at Tuesday's news and notes, which challenge our beliefs and remind us that if you're thinking about the English national team's football, your priorities are beyond the point of recovery:

* Noel mentioned it in today's earlier post, but Fabio Capello has once again announced his concerns for the fast-living lifestyle of Andy Carroll---back in March we heard the same thing from the lame duck Italian, complaints which were quickly dismissed by Kenny Dalglish. And, after he was omitted from the squad that eased past Bulgaria on Friday, Carroll again found himself in the crosshairs of Capello's sojourn into life coaching, with a remarkably similar tune, albeit with a few more qualifiers:

"His style of life is a problem because you need to be careful. He is an important player not only for the England team but also for Liverpool. I think he understands what he needs to do. I don't know his lifestyle but I never spoke about this. I think, if you want to be a good player and a good sportsman, he needs to drink less than the normal. It is a private message. I have spoken with him and it was a private discussion between two people. I think he understands a lot. He is young, we need to help him and speak to him, because he is a really important player."

So, just as it was back in March, it's a private concern that's spoken about in a very public manner, and it draws attention to a player who hasn't been starved of it since his move to Liverpool in January. The discussion about his place in the Liverpool squad has already gained a full head of steam after the club turned in a more efficient attacking performance with him on the bench against Bolton, and now we can add irresponsible life choices to the ways in which Andy Carroll's been a complete flop.

Or we could be a little more patient with the 22 year-old's development, slating him for neither his performances nor his off-the-pitch activities unless there's actually a valid reason to do so. The club doesn't appear to be as concerned, and we likely wouldn't know if they were, but the rush to pronounce him as the next Duncan Ferguson, at least right now, seems to be more a product of the rabid and sensationalistic English press than it does an accurate reflection of the striker's future. But good thing Capello brought it up. Again.

* Part of the reason Andy Carroll's been under such close scrutiny, other than his price tag and the fact that English journalists are walking hard-ons for anything resembling controversy, is the ridiculous success of Liverpool's other January signing, Luis Suarez. He spent most of the spring torching Premier League defenses, who were largely incapable of dealing with him with any sort of consistency. The inherent danger of that success, though, is that the spotlight stresses the urgency of developing a strategy to deal with a player that was once an unknown quantity. It's not lost on the Uruguayan, who's looking to his second season in English football with the type of confidence you'd expect:

"I feel no pressure at all. In fact when a defender studies you, it almost makes it easier because you just don't do what he expects you to. If he thinks you are going to go to your right, you go to your left and so on, and you just keep switching it round so you are hard to read. It keeps you on your toes but really it's harder for the defender because he can't know what you are going to do."

There's quite a bit more to Suarez's game than going either left or right, and we've witnessed a fair bit of that in the four matches we've seen thus far. He faded against Sunderland, but with a spell on the bench against Arsenal prior to forcing the winner and adding one of his own, he's been rampant Exeter City and Bolton, and had another impressive performance in a Uruguay shirt against the Ukraine on Friday. Burnout's always the worry, but with the addition of Craig Bellamy and a training staff that's seemingly well aware of the longer-term concerns, hopefully we can expect more of the same.

* Some brief fitness notes to round out the day's news---Kenny Dalglish made note of Charlie Adam's injury while discussing the anomaly that was Stuart Pearce's smart decision to send Jordan Henderson home early, noting:

"Charlie is back with us and we will just have to wait and see how he responds to treatment. It's too early to know about the weekend yet."

I don't want to say that Liverpool's once-deep midfield is now looking actually not that deep at all, but if the partnership between Lucas and Adam is the way forward for the club, let's hope that he'll be ready for the trip to Stoke. If not, there's still plenty of adaptability in the midfield personnel, and Dalglish a fair few options that don't involve Adam.

There's nothing new to report on the fitness of Steven Gerrard and Glen Johnson that hasn't been mentioned already---the former's groin found its rightful place back amongst our headlines yesterday, and the latter was left out of the England squad for qualifying and is hopefully nearing match fitness. Johnson's absence was exacerbated by the sight of Martin Kelly limping off against Bolton with a hamstring injury, which placed him on the sidelines for both club and country and presented us with the frightening but ultimately effective sight of Martin Skrtel bombing down the right flank. The news for Kelly seems to be good, though, with the player reporting a "slight strain" and no major impairment for the week's training. Might be optimistic to see him at the Britannia on Saturday, and if he's unavailable there's going to be some questions about formation and personnel.

Euro qualifiers are ongoing throughout the day, and from a Liverpool perspective it's going fairly well---Andy Carroll's made the bench for England after passing his field sobriety test, Dirk Kuyt and Holland lead Finland late, and Slovakia and Denmark are both level in their respective matches at 0-0. More updates later as needed, along with a look at tomorrow's NextGen Series match for the youngsters with Norwegian side Molde.

Until then, we can entertain the idea of Andy Carroll taking up some sort of professorship if this whole football thing doesn't work out: