Share All sharing options for: Liverpool 3, Molde 0: The U19s Finally Find Some Finishing

After watching Liverpool largely dominate their recent NextGen series games without being able to convert their chances, about the only difference at the start of the fifth group stage match against Molde on Thursday night at Anfield was that it was Molde who came out looking the more dangerous side. However, Liverpool soon settled, and then things quickly returned to what has become an at times frustrating status quo.

Liverpool would signal their intent inside ten minutes, with Ryan McLaughlin bombing down the flank from his position at right back and carrying the ball into the box at speed. A strong challenge by the Molde defender would have him claiming a penalty that in real time looked underserved, though on replay it did seem that Liverpool may have been hard done by. It shouldn't have mattered, though, as strong performances all over the pitch saw Liverpool maintaining almost constant possession and winning it back immediately any time they conceded.

Soon after the penalty claim, Liverpool would get their second golden opportunity of the match when Suso curled a corner towards the edge of the six-yard box where Michael Ngoo was waiting. Ngoo met it firmly, sending in a shot that the keeper could only push towards the post—but it was still going in. Molde, however, had a defender on the line, and the chance was scrambled away.

Then Tony Silva made one of the mazy runs that leave people crossing their fingers and toes, hoping that he can develop the more well rounded game he'll need to make the step up to the next level, as he cut inside and onto his left foot from the wing and fired a bullet towards the bottom corner from the edge of the area. It rifled off the base of the post, the keeper clearly beaten, but when it came back to Silva all he could manage with his second effort was a rather more tame side-footed effort that was easily stopped.

Stretches of the sort of quick passing everybody expects to see from this group of Liverpool prospects, given all the talent on hand and that they've been coached for a few years now by former Barcelona academy maestro Rodolfo Borrell, ensued. In particular, lesser known names like left back Brad Smith and midfielder Craig Roddan continued to impress, doing their best to remind more casual viewers that it's more than just Raheem Sterling and Conor Coady at the youth and reserve level.

When they were done passing it around, though, having done their best to tire a Molde side that barely saw the ball for long passages, it was right back to wasting one golden opportunity after another: Sterling beat two defenders in the box and curled it just over the bar, then Suso worked a short free kick to Sterling on the left only for his drilled cross to strike an unprepared Ngoo in the shin and skip off into the Anfield Road end. And then it was halftime, and though Liverpool should have been up by a comfortable two or three goals to nil they once again found themselves in a precarious position after showing an at times shocking lack of finish.

In the second half, Adam Morgan would come on for Suso in an attempt to fix Liverpool's biggest problem, as even if Morgan doesn't seem the club's most gifted prospect, he certainly has one talent that's been lacking at all levels of late: The ability to put the ball in the back of the net. Despite that, the pattern would remain the same in the early going, with Ngoo hitting the crossbar, Morgan's point-blank shot blocked out of bounds, and a Coady curler well saved.

Then, finally, Morgan was sent clear on 67 minutes, and after a day of frustrating profligacy it was the coolest of finishes that broke the deadlock as Morgan passed the ball past the keeper and into the net. With Liverpool needing all three points to keep their hopes of advancement anything more than mathematically alive, it was a goal that Liverpool desperately needed—and a goal that had started to seem as though it was never going to come, no matter how many chances the home side crafted against an overmatched opponent.

Then, within minutes, normal service was resumed when Morgan sent an inch-perfect cross to Michael Ngoo in acres of space. He was central, ten feet out from goal, and the keeper was out of position. And he sent his cushioned header a good ten feet wide of the gaping goal.

Against Wolfsburg or Sporting, Liverpool would have been punished for their wastefulness—against both Wolfsburg and Sporting they were punished. Molde, though, didn't have the players to hurt Liverpool, and in the end even all the wasted chances wouldn't seem quite so bad when Adam Morgan and Tony Silva both scored in the game's closing minutes to put a sheen on the scoreline that seemed a better better match for a largely dominating display.

However, whether it's enough to see Liverpool on to the knockout rounds in January is a different matter, as Molde and Wolfsburg both have two games left in the group while runaway leaders Sporting have three remaining. As a result, Liverpool's position remains precarious despite having seven points and standing alone in second place. Wolfsburg in particular remains a threat, and in the end it could well come down to goal differential—the first tiebreaker in the NextGen Series—to determine who advances, making Liverpool's late two goals invaluable to their chances for advancement. But no matter what happens over the coming weeks, in the end it was good just to see the kids hit the back of the net a couple of times. 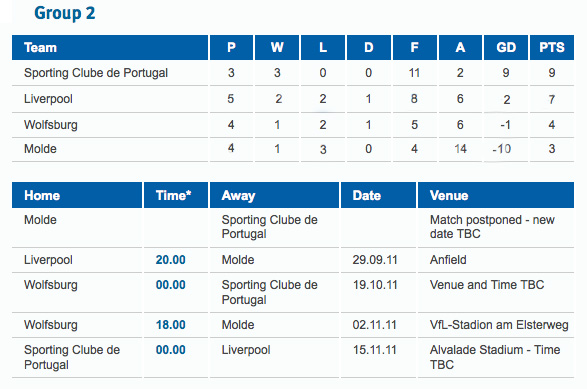 fixtures and tables via NextGen Series.