Share All sharing options for: Clarke Grades Liverpool's Start, and Other Wednesday Notes 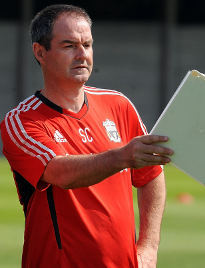 Six matches into the season, and the discussion about where things stand from a Liverpool perspective, both individually and collectively, is well underway. Noel's given us a couple of great pieces already, first looking at Andy Carroll on Monday and Charlie Adam today. While both have a titular (not like that, pervs) focus on specific individuals, both have also created excellent conversation about these individuals' impact on the team as a whole, which, given the changes in the side, is an interesting and, in some cases, divisive topic.

But for all the discussion and potential areas of disagreement, we can probably agree that there's more positives than negatives, there's a general feeling of optimism despite some bobbles, and Liverpool don't appear to have a trajectory that resembles a Hodgson-guided homing missile destined for alcoholism-inducing mediocrity. Which is nice.

* Assistant coach Steve Clarke has also weighed in on the season to date, and, depending on where you caught up with his thoughts, you might have a very different impression of his views on the start to the year. It could be a simple outlining of expectations for improved performances (Clarke expects Liverpool to improve), a defense of very normal up-and-down early season form (Steve Clarke defends Liverpool's 'average start'), an expected byproduct of revamping the squad during the summer (Clarke: Liverpool's 'average start' down to squad revamp), or blaming the FNG's for absolutely anything and everything that's gone wrong (Steve Clarke blames Liverpool's ' 'average' start on new players).

Whichever headline you choose, the quotes are basically the same:

"Without getting too carried away or too disappointed it's probably just an average start. You're probably looking at about a seven out of 10. Some pleasing performances and some not so pleasing, but you'd expect that from a group of players where you've made so many changes and you're trying to bed a few things down."

Even-tempered stuff that, removed from size-72 font, is a fairly bland assessment of Liverpool's early efforts, ignoring the fact that "7 out of 10" would be above-average assuming use of Likert-scale items to evaluate the early season, ranging from 1 being "Poulsen" to 10 being "Gerrard's Healthy Groin." If we're tossing around the blame card, though, it's not a huge stretch to say that some of the troubles we've witnessed have been a result of trying to "bed a few things down." Whether or not those "things" are people named Jordan Henderson and Charlie Adam is up to you to decide, but regardless, there's inherently the expectation that "things" will either settle in or be altered to the benefit of the squad.

* On the topic of Henderson, it's easy enough to mistake the critiques and analysis for condemnation, as there's often little gray area when we're talking Liverpool. You either think he's settling in well or that he's shit, and there's no room in between. And if you're not using his price tag or nationality anymore, you're not up to speed. Lucas has a slightly different perspective, and given his place as the best thing to happen to Liverpool's midfield since he was the worst thing, it's worth listening to:

"We just have to encourage him and give him confidence so he can keep improving. He's already adapted with the Premier League but to change clubs and to come to such a big club like Liverpool it's always going to be hard.

"I don't blame the young players because I've been in their place for a few years. I think he's played well and he'll get more confidence with more minutes on the pitch and understand the role that's he's being asked to do. He has the potential to be a good player but he's still very young. We'll give him time and we'll be patient and I'm sure he'll be a good player."

Disappointing that he didn't take the chance to pile on---he could have buried Henderson once and for all and ultimately spurred Martin Samuel into an overly verbose and nationalistic criticism of the poisonous influence of foreign players on England's promising young heroes. So maybe it's better that he didn't. But actually it's just nice to see someone who's fought through years of criticism and found his way out the other side coming to the aid of a teammate whose Liverpool career, if the early signs are any indicator, might be somewhat similar.

* And lastly, in news that might make you forever question the judgment of Rafael Benitez, Dirk Kuyt has revealed that he has the feeble constitution of Liverpool's former Ukranian dynamo to thank for his status as one of the derby's recent heroes. Because of course:

"In my second year as a Liverpool player, it was a really tough game and the breaks went our way. I remember Rafa read out his list of penalty takers before the game and I was second choice. Andriy Voronin was first on the list.

"When the referee gave the first penalty, Andriy came to me and asked whether I wanted it because he didn't feel too confident. I said: 'No problem...I'll take it.' I was so happy to score the first one and when the second one came around, I didn't hesitate. You know that if you miss it, you probably draw the game but it feels like a loss because it's in the last minute. To score the winner; it was one of the best feelings I've experienced in my Liverpool career."

So to recap: Andriy Voronin was ahead of Kuyt, Steven Gerrard, Yossi Benayoun, and whothefuckeverelse on Rafa's list, but eventually found the nerves to be more overwhelming than his golden braid could handle. Thankfully Voronin soon found his way to pastures Pantener, Kuyt proved himself to be up for it in one of the most memorable examples of his big game potential, and we can all look back and laugh nervously before changing the subject.

I'll be back late tonight/early tomorrow with a preview and matchday thread for the youngsters' crucial home match with Molde in the NextGen Series, but in the meantime you can use Nicholas Cage as your inspiration for how to react to the revelation that Andriy Voronin was once considered a better option than Dirk Kuyt to do...anything (language NSFW):