Afterwards, opinions ranged from Andy Carroll having finally shown something of his worth as more than a target for long clearances to him having done nothing in particular to rewrite the gargantuan failure narrative he's been saddled with since arriving at Liverpool for £35M in January. Sometimes those wildly divergent opinions even came from the same pundit. Either way, in retrospect, the most interesting aspect of Carroll's game against Wolverhampton on Saturday—his best of the season from whichever angle one might come at it from—might not have been the actual performance so much as the way the rest of the squad performed around him and the role he was asked to play.


A point of contention for some has been that it's impossible to properly judge Carroll when he's provided with neither quality service or support. Whether one saw the Geordie giant as a traditional targetman or raw talent to be refined, early in the season his inclusion more often than not saw only lofted balls to his head from defenders and deep lying midfielders without any support for him to work with if hold-up play was the intention. Instead of either asking him to play with the ball at his feet or giving him the support he would have received at Newcastle, he was left in situations where he needed to win the aerial battle—often against multiple defenders—bring the ball down under control, and then beat opponents without a teammate in sight.

It was an uncomfortable situation that suggested a serious disconnect somewhere in the playing and coaching staff, as often the team didn't appear to take a coherent approach with Carroll on the pitch. For all the talk that he wasn't living up to his pricetag—or even to what would be expected of him regardless of pricetag—the reality was that the biggest problem lay in his teammates resorting to route one passes without giving him route one support. The biggest problem was the when he played, nobody around him seemed to quite know what to do, while in all of this expectation may have coloured the impressions taken away from a surprisingly limited data set: Wolves on Saturday was only the second full opportunity to watch Andy Carroll play alongside Luis Suarez in a strike pairing with a coherent, planned approach.

At times this season there has been a suggestion that Kenny Dalglish's preferred approach involves Luis Suarez leading the line, with either Andy Carroll or another player in support. It's how the pair started out against Tottenham, though with Spurs rampant and an ineffective Charlie Adam quickly reducing the side to ten men any tactical intent quickly went out the window. It's also how the duo set up when they had forty minutes together against Exeter City in the League Cup after Raul Meireles went off injured, and it's how they began a rather disappointing showing in the season opener versus Sunderland.

And that opener against Sunderland was a prefect example of the obvious disconnect between the players on the pitch, the coaching staff, and anything like a coherent gameplan for Andy Carroll: The player spent most of his time in a more reserved role behind the main striker (as seen above) but with many of his teammates resorting to agrarian passes to his head that did nothing aside from making the entire side look disjointed while grumbles about Carroll being a failure at Liverpool grew.

Until Saturday's match against Wolves, however, most of Carroll's time since then has been spent either without Suarez on the pitch as the most advanced striker as against Arsenal (left) or coming on as a substitute and clear Plan B. Despite being well over a month into the new season, Wolverhampton provided only the second chance to come away with a reasonable idea of how Kenny Dalglish sees Carroll fitting into the side over the rest of the season, and even if Saturday's match was far from perfect and did nothing to answer lingering questions about the effectiveness of some of the other new signings, it was at least a more coherent display that sought to integrate Andy Carroll into the action instead of leaving him to stick out awkwardly.

Just as Saturday's match would seem to give some hint at Carroll's long term role with the side as something other than a traditional number nine, however, and even on the back of by far his strongest showing of the season, it also casts further doubt on his long-term prospects. Especially if Steven Gerrard can stay healthy, since despite talk of Gerrard coming in to replace somebody in midfield, early returns would seem to instead have Gerrard and Carroll competing for the same—or at least a similar—role.

Since Kenny Dalglish arrived at Liverpool in January, no player has spent more time on the pitch than Lucas Leiva as the club's only established defensive midfielder, while early signs are that new arrival Charlie Adam is a project for the manager and quite nearly undroppable despite the doubts of many. More to the point, in Gerrard's two substitute appearances since returning from injury it appears he won't be in the running against either Adam or Lucas for playing time most weeks, as on both occasions Liverpool's midfield duo—Adam and Lucas against Wolves in the league and Spearing and Lucas against Brighton in the League Cup—remained intact, with Gerrard coming on to replace an established striker and taking up the old free role he played to such great effect under Rafa Benitez with Carroll then pushed further up the pitch (as seen in the average position maps against Wolverhampton below). 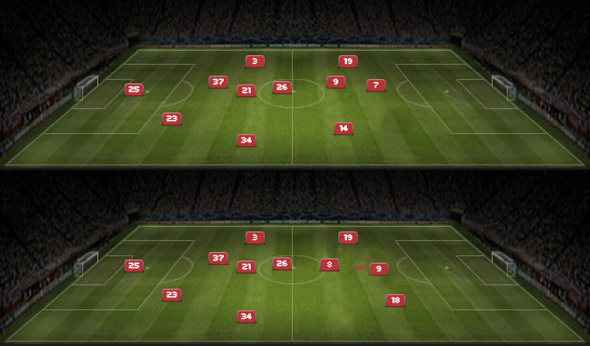 Wolves did seem to provide a clear sign of how Dalglish sees Andy Carroll fitting in alongside Luis Suarez and the rest of the Liverpool squad, and it showed some very promising signs as to what people might be able to expect from Carroll in such a role as he develops. But there's also a clear suggestion that despite his best performance of the season, when everybody is healthy it is Carroll more often than not who will soon find himself on the outside looking in in favour of Charlie Adam and a three man midfield, with Gerrard moving back into his old role supporting the striker and Suarez a lock up front. For Carroll it hardly seems a just reward for taking the first steps towards getting the critics off his back, but it does seem to be where Dalglish is heading.