An encouraging first half followed by a nervy second, with the opposition growing in stature and causing all sorts of concerns. Wasted chance after wasted chance for Liverpool, with innumerable chances to extend a lead and put the match to bed. If nothing else, a performance entirely consistent with the way the early season has gone save for a few results on opposite ends of the spectrum. It's three points, and that's good enough for now, but if this continues, I'm not sure my blood pressure can handle a full campaign.

Things didn't exactly get off to a flying start with the announcement of the team sheet, with Kenny Dalglish opting to remain with all but one of the eleven that started against Spurs last Sunday. The change was a significant one, though, with Martin Kelly coming into the side at right back and Martin Skrtel shifting centrally to partner Jamie Carragher. And despite the impressive work of Dirk Kuyt and Craig Bellamy midweek, both were on the bench, and Maxi, who played a large part in Liverpool's fluidity early against Brighton, didn't even make the squad.

Early returns weren't positive, as Wolves came out with more intent and saw most of the possession for the first ten minutes. Two early free-kicks in dangerous positions gave the guests a few looks at goal (both down to Charlie Adam mistakes), but a scuffed shot at Pepe Reina's goal was all they could muster. Worrying for Liverpool, and fortunate to have a stalwart effort from Jose Enrique, but on one of their only forays forward of the opening minutes, they'd find the opener. 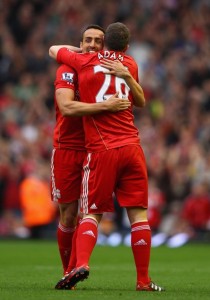 Andy Carroll's header to the far side was gathered by Stewart Downing, who played it out to Charlie Adam twenty-five yards from goal. Adam took a touch, faked a shot, and then powered one toward the far post, where both Andy Carroll and Luis Suarez were positioned. It was always a shot, but not an entirely terrible idea to fling it into a crowded area. Roger Johnson attempted to get low and power the header out, but misjudged his positioning and redirected the shot past Hennessey into the far corner. Unlucky for Wolves given their early dominance, but a welcomed sight for the Reds.

Also welcomed was the way the goal changed Liverpool's play---passive early, they build upon the goal and stretched Wolves all across the pitch. Luis Suarez was at his brilliant best, burning the Wolves back line and causing havoc in his linking play with Carroll, Downing, and Enrique. Suarez had two chances to get the match's second goal, first from Carroll curling in a terrific cross from the left that was inches from the Uruguayan's boot, and then from a quality cut-back by Downing that was pulled wide. Wolves started to work their way back into it, again winning a couple of free-kicks near Liverpool's goal, but the hosts would soon buck the trend of failing to add to an early lead.

A long Jose Enrique ball forward would be met with a perfectly timed run by Suarez, who was able to work his way around two defenders, turning twice before firing past Hennessey at the near post with his left foot. It was a tremendous finish by Suarez after it looked like he had only made it more difficult for himself, and, for the first time this season (thanks to nate for the tip), Liverpool had two goals before the break.

And as it would turn out, that proved to be the difference. Wolves were vastly improved in the second half, scoring through Steven Fletcher in the 49th minute and escaping a flurry of Liverpool chances shortly thereafter. First Suarez was denied by Hennessey, then Andy Carroll hit the post from Jose Enrique's well-delivered cross, and finally Hennessey found a way to save Stewart Downing's effort on the break. After that, it felt like an equalizer was only a matter of time.

Thankfully it never came, as Liverpool scrambled in defense and prevented an impressive Wolves attack from getting the leveler. The introductions of Dirk Kuyt and Steven Gerrard boosted the home side, with the former providing desperately needed cover on the right and the latter reinvigorating Liverpool's attack. A final Wolves break was magnificently ended by Lucas, who, in the last of his 270 minutes in less than a week, tracked down Matthew Jarvis and prevented any further threat. 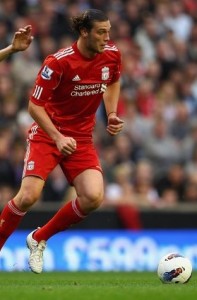 The three points is obviously welcome, and the first half performance gave indications that even with personnel we might think is questionable, this side is capable of taking over a match. But the second half again raised questions about the ability to see a match off and finish chances, as well as defend with any sort of consistency, and you can't help but think that some of the late nerviness could have been avoided with a few changes.

Maybe the most notable takeaway, though, was the performance of Andy Carroll, who looked like a different player up front and was roundly excellent. He didn't have a goal for his efforts, but covered plenty of ground up top, linked well with Luis Suarez, and came away as one of the best players on the day. Plaudits also for Jose Enrique and Martin Kelly; the former rebounded from a shaky effort at White Hart Lane to resume normal service, and the latter was very good despite increased attention in the second half. And Luis Suarez returned to tormenting the opposition defense, getting another goal and creating plenty of other opportunities. His behavior after coming off seemed divisive; some saw it as unneeded petulance, while others lauded his desire to remain on the pitch. Regardless, if he manages to stay out of his own way, he's tremendous.

Not so positive for a handful of others, including Charlie Adam, Jordan Henderson, and Martin Skrtel. Henderson will likely come in for plenty of criticism, as he was completely anonymous and didn't do much going forward or providing cover. Repeat the "he's young, he's settling in" mantra all you like, but there's no denying that right now, Dirk Kuyt is the better option on the right. And while Adam was responsible for creating the opener, he provided almost nothing in the midfield and again showed a tendency for a rash tackle. Lucas was a one-man midfield at times, with Adam looking a step off the pace for most of the match. Skrtel was lucky to avoid bookings on a number of occasions and made things far too nervy, and when you're partnered with Jamie Carragher, that's not the best quality. Still major questions to answer at the back with Daniel Agger out and Sebastian Coates still young and settling in. See what I did there?

Any way you cut it, though, it's a win for Liverpool in a tightly-contested match, and one that they'll hopefully build upon. If today's brief glimpse was anything to go off of, the captain's return will improve the side, and England's Most Expensive Striker That's Not Living Up To His Price Tag had one of his most encouraging performances of the season. There's improvements to be made and discussions about the team sheet to be had, but if we're complaining about winning in such tense fashion, I guess we'll have to take it.