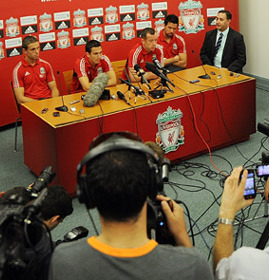 Two days away from the final friendly of the preseason and just over a week away from the season opener against Sunderland, and there's plenty time for things to change in terms of personnel. Discussion this morning (noted earlier in the week by Noel) has a deal done for Jose Enrique and more talk about a loan deal for Joe Cole to QPR (who's apparently sold his home in Liverpool). With nothing confirmed, though, we're left waiting to see how things unfold over what's sure to be a week filled with anxiety and, consequently, rampant barbiturate abuse.

* Those that did arrive had their coming-out party earlier in the week, taking the requisite scarf-holding pictures and smiling awkwardly all around the Melwood complex. Basic new signing stuff, but always interesting to get a read on their expectations ahead of their first season in a Liverpool shirt:

"Hopefully I can get into the team first of all, and if I get the chance to play I can make my Premier League debut for Liverpool and that's all that matters really. All of my family and friends are Sunderland supporters and will all want them to win but I'm a Liverpool player now and I'm looking forward to playing for them. Hopefully we can get a good result on the opening day of the season."

"Liverpool is a tremendous Football Club with a great manager and great players. Once I heard of the interest there was only one place I wanted to come. I heard rumours that other clubs were interested but once I knew the manager wanted me I wanted to come here and play for Liverpool - and for him. There's a buzz about the place. The new signings have come in and they did well towards the end of last season. We've got a great manager and everyone is pulling together in the right direction. The club is on the up and I want to be part of it."

"The situation was that I wanted to come to a club like this. Blackpool said I couldn't go and I respected that. I think the performances I put in from January until the end of the season showed that I was 110 per cent behind the club. I wanted to help keep Blackpool in the league and it was disappointing we couldn't do that. But I'm just delighted to be here now as a Liverpool player. It's time to move on and look to the future."

"I couldn't turn down the opportunity to come to the Premier League, especially signing for Liverpool which is a huge club in Europe. I can't wait because I've heard some great things about how fantastic Liverpool supporters are, especially with the way they get behind the team at Anfield. I am looking forward to experiencing that so hopefully I will get a chance to play a part on Saturday."

On the heels of all the talk about Alberto Aquilani's prolonged swan song, and some creepy handcam footage of he and Damien Comolli in a Norwegian hotel lobby, it's worth noting that all of the new signings go out of their way to talk about how Liverpool was where they wanted to be, and not simply just another destination to end up at. Sure, it could just be new signing speak, and we've seen a fair few players express their love for Liverpool and turn heel shortly thereafter, but for now it's nice to see they're all in line with what the club are hoping to accomplish.

Aside from Doni, who's spent most of his minutes behind a back line that's clearly out of sorts, we've had a decent amount of time to get a read on what they'll bring to the squad---for me Downing's been head and shoulders above the other two, with Henderson impressing in work rate and movement and Adam filling a number of roles in central midfield to varied success. We're likely to get another extended look at three of the four on Saturday, and it wouldn't be surprising to see at least two in the starting eleven when Sunderland visit Anfield. By that time, though, the sentiment about wanting to be at Liverpool will have worn off, and it'll be time for them, along with the rest of the squad, to produce.

* These signings obviously came at the expense of FSG and, more prominently, John Henry, who's apparently formed a good working relationship with Kenny Dalglish. The manager spoke at length about the impact the new owners have had on his ability to do his job, as well as the changes overseen by the new American owners:

“They have been fantastically supportive financially during the window. If there is a better owner that is as supportive as John Henry, then whatever club he is at has done very well for themselves. John is just a good lad. He is genuinely a good fellow. He cares passionately about the club and he wants it to go in the right direction. Anyone who has got any affinity for the football club will want that too. We are fortunate that there is nobody pulling in the wrong direction. It is certainly helpful everyone is singing the same song."

Again, it doesn't provide much more than a fuzzy feeling in your stomach (which might actually be the drugs), but it's helpful to contrast the general atmosphere around the club with where they were at this time last year---desperately in need of a change in owners, on the precipice of one of the worst starts for the club in the Premier League era, and fearful of what the future might hold.

So yeah, Liverpool have struggled a bit this preseason, and at times their defense has looked like they were playing "Red Rover, Red Rover" with Lars Iver Strand, but only a year removed from the trials and tribulations of the previous owners, the club are in a spot far more conducive to success.

* Finally, one confirmed deal outside the first team---Thomas Ince has headed to Blackpool on a two-year deal, joining Gerardo Bruna, who joined Ian Holloway's side on a season-long loan earlier in the summer. He apparently wasn't in Liverpool's plans any time soon, with most of the youth and reserve squad buzz focused on Raheem Sterling, Suso, Conor Coady and company. He featured only once for the first team last season, in the League Cup loss to Northampton Town, but saw regular action on a short-term loan deal to Notts County, netting twice under the supervision of his father Paul. For now the chance to replicate his dad's days at Liverpool have come to an end, but he's young and talented, and hopefully his career takes off at Blackpool.

That's it for today barring any major activity in the transfer market---tomorrow I'll be back with the preview and matchday thread for Valencia on Saturday, which should be easy enough to watch live either on TV or in a dark corner of the internet.

In the meantime, entertain the creepiest solution for Steven Gerrard's wonky groin that I've come across. Sweet dreams: