Tea and Crumpets with the Bolton Offside

Share All sharing options for: Tea and Crumpets with the Bolton Offside 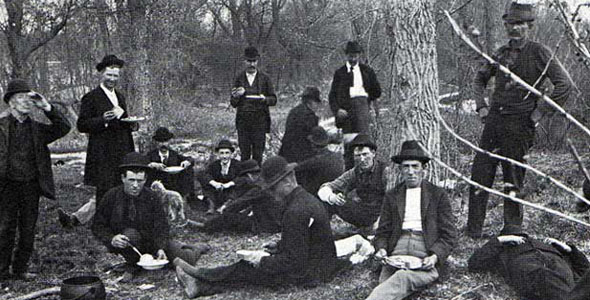 After sitting down for a chat before the Sunderland match lead to an ultimately disappointing result while Arsenal turned out much better when taking the week off, there was some obvious trepidation when it came time to talk with Matilda of Lion of Vienna Suite. But when Tea and Crumpets heard that fillet steak simmered in red wine, garlic, and vegetable sauce was an option at the Reebok and that we wouldn't be stuck eating hobo stew out of an old tin can, we figured we might as well cross our fingers and take a shot at trying to better understand these Wanderers that don't do a whole lot of wandering any more…

Owen Coyle has made 14 stops at eleven clubs across a 22 year professional career, never spending more than three seasons in the same place. Adding in his four jobs as a manager, he's spent that maximum of three concurrent seasons at a club on only three occasions. Taking into account one year spent as a player-manager, that means he's spent nine years at three clubs and his 17 other years in football have been spent bouncing about on a faintly ridiculous 14 different occasions. Now, while its nice that the club has taken its name seriously and gone for a vagabond migrant worker of a manager, it does raise the question of how it feels to have a man in charge you wouldn't bet on sticking around past this season if only based on his past record of going from place to place like a vagabond migrant worker. Also, will Sam Allardyce be returning to manage the club once Coyle inevitably moves on and Allardyce's scintillating football stylings hopefully move West Ham down into League One?

I think Coyle is going to buck his own trend and stick around a while longer, simply because he hasn't achieved everything he wants to with the club. With Burnley he got them promoted, which was his goal, so he was ready to move on, but he wants to build Bolton up more and achieve more (dare I say it? European football) before starting a new project. I don't think Big Sam will return, as it would be a backwards step for both parties. Big Sam established us as a Premiership club, and he did that well, but it'd be like dating your high school sweetheart again—we're just different now.

I've got chills. And not in a good way. But moving on: Given the club are the Wanderers, and have been since four years into their existence when they changed their name to reflect having already spent time in three different homes, does it make the supporters vaguely uneasy to not only have the longest relationship with a kit manufacturer in the Premier League but to have that manufacturer's name on their stadium? I mean, when you come right down to it that's the kind of set up that seems a fairly clear signal a comfortable domesticity without a whole lot of wandering.

Well, I'm not wild about the name of the stadium. "That temple of football, the Reebok," doesn't sound quite as poetic as Burnden Park did. Although to be fair, the move to the Reebok is the most wandering we've done in a while, as we were at Burnden park for 102 years before moving to there. It is true that Wanderers may not exactly describe us anymore, but who would support the Bolton Domestics?

Why exactly is your club's crest twirling streamers like a majorette?

This is information we are only allowed to reveal upon initiation into the Cult of the Wanderers. Sorry.

Flipping a coin a hundred times and having it come up heads each and every time makes it no more or less likely to get tails on the hundred-and-first flip. Each time around is a distinct, unrelated event, and despite the human mind's insistence on such faulty ideas as the law of averages—a belief that even over the short term distinct and random events must somehow even themselves out—there's simply nothing to stop each flip from being a 50-50 proposition. Yet the human mind demands it must be otherwise. It demands the hundred-and-first flip must come up tails, since tails is so long overdue. It insists that if the first two children are boys, the third being a girl somehow becomes more likely than having a child of either sex would be for a first time parent. It insists that a night of losing on the roulette wheel will suddenly turn around if you just keep going, because surely things are fated to even out in the end.

And then there's Bolton, who've long held an ignominious record by having now spent 72 seasons in the top flight without once winning it. Surely it must feel as though simply showing up 72 times should have lead to the Wanderers taking home at least one title by sheer dumb luck and persistence if nothing else. Do supporters still convince themselves that this time around the coin has to come up tails, or did they long ago accept the universe as a cold, cruel, and uncaring place where things aren't fated to even out in any given way? And has anybody told shirt sponsor 188bet about this lesson engendered by the club's history?

Given the fact that you have to look back to the 1950s for the club's last glory days, most supporters don't fool themselves. Generally speaking, I find we are a charmingly pessimistic people, and no one mocks Bolton like Bolton fans do. You learn to take pleasure in small meaningless things, like being top of the table after the first round by the grace of alphabet rules (no, Manchester City, we weren't joint top, BOLTON WERE TOP). Maybe we'll win the league someday, but I'll probably be a very old lady. And yes, I picture the people at 188bet quietly chuckling at us whenever they send the cheque.

If Gary Megson were still managing the club, Andy Gray's infamous bon mot about Barcelona having trouble at Stoke on a cold and wet winter weekday evening might have been stuck to Bolton instead. How much do fans regret missing out on such an opportunity?

I lose sleep over it every single night.

With no strikers, Kevin Davies old, fat, and past it, and Lee Chung-Yong set to miss nine months after having his leg broken playing against fifth tier side Newport County in the preseason, is the club likely to get back to their roots as Christ Church FC and channel founding schoolmaster Reverend Thomas Ogden by praying for victory? After all, with owner Eddie Davis joining all the cool kids in the Premier League by overseeing the club's acquisition of £93M in debt, a spending spree to bolster the squad doesn't seem like the most likely thing in the world. And if prayer fails as it has 72 times before, does Coyle have an actual plan for finishing closer to last season's high of sixth place than the season ending fourteenth in spite of those setbacks and shortcomings?

First of all, I will hear no ill against Super Kev (see this for our full opinion). With that said, we no longer need a Reverend as we have Saint Owen Coyle at our helm. It's true that we have a small squad and no money, but the club's transfer strategy has never involved the big bucks (let's just pretend Elmander never happened). The club either buys young, promising, but unproven players on the cheap, raises them and then sells them on, which is the theory behind Gary Cahill, or aging stars nearing the end of their careers, like recent signing Tuncay. We did get the chance to ask Coyle almost the exact same question when we saw Bolton play Houston this summer. He responded, "There has been tremendous improvement in the club and as a manager in the club, my job is to improve every year and we've done that to this point and must look to do it again this year. We're looking to add three or four players to the existing squad... we want to add strength in depth." While our squad needs it, Coyle is used to working with what he has. He is not a master tactician, he is a motivator that can get the best out of players.

Right, so it sounds as though Joe Cole and Christian Poulsen won't be joining the Cult of the Wanderers along with David NGog. Shame, that. Mostly because Joe Cole would make a champion twirler, if you think about it. Or not, since the resultant image of Cole straining away in a leotard is mildly disturbing. And he probably couldn't survive a wet, cold weeknight in November at the Reebok. Especially in that leotard. So perhaps it's best to cut this train of thought short and once again thank Lion of Vienna Suite for talking to us. Even if I still wouldn't bet on Owen Coyle sticking around another season.