Exit for El Zhar, Enrique Meets the Press, and Other Friday Notes

Share All sharing options for: Exit for El Zhar, Enrique Meets the Press, and Other Friday Notes 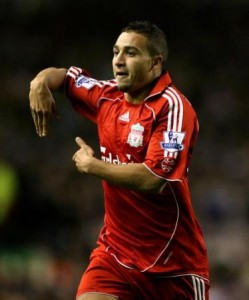 Right, starting Friday off with the most important bit---if you live in the UK and happen to have missed the petition going around for full release of all documents pertaining to Hillsborough, please hit the link to sign up and lend your name to the cause. Those of us outside the UK can only support from afar and get the word out; Chris from Paisley Gates alerted us to the fact that the Hillsborough Justice Campaign has asked that only legal UK residents take part, as names with fake addresses will only weaken the petition. Make sure to let anyone you know that lives in the UK what's going on as well, and hopefully this can effect some real change.

That's rightfully taken most of the attention in the Liverpool universe for the last twenty-four hours, and the effort will continue until there's 100,000 signatures gathered (at current there's just under 42,000), at which point Parliament would then have to address it.

In the meantime, though, the Friday news and notes:

* One return that was unheralded was that of Nabil El Zhar, who featured somewhat regularly under Rafa Benitez before being shipped out on loan to PAOK last season. He played sparingly there, making twelve appearances and netting three times, only to return to Liverpool and find himself firmly on the outside looking in. He made a couple reserve team appearances while some sort of deal was being arranged, and today the club announced that he'll make a permanent move to Levante.

He always seemed like he was on the cusp of making an impact during his time at Anfield---Rafa saw fit to give him meaningful minutes and a handful of starts between league, domestic, and European competition. He scored his lone Liverpool goal in a Carling Cup match at Anfield against Cardiff, hitting an absolute thumper early in the second half to open the scoring. He never really worked his way back into the collective conscious, though, and the reaction to his reserve squad appearance earlier in the month was met with surprise that he was still with the club. Hopefully the move to Levante sees increased first team action and a chance to flourish for a player who's relatively young. Oh, and that we see moves for Joe Cole and Christian Poulsen soon to follow.

* From one on the way out to one freshly arrived; José Enrique made his Liverpool presser bow yesterday, touching on his joy at joining the club, his surprise inclusion against Sunderland on Saturday, and the hopes he has for seeing the club in the Champions League sometime soon. The Liverpool stuff is all well and good, but the most interesting parts of the interview focused on his thoughts about his former club and the direction he sees them headed:

"I do worry. Not because we leave, because at some clubs good players leave. But because they have not signed another left-back, nothing. I'm worried not for the club, but more for the fans because they are amazing. They are like here, it's really similar. I have a lot of friends in the dressing room and they are a little bit nervous because they don't know what the club is going to do."

It paints a dire picture for the Tyneside club, who, as Enrique mentions, have now passed along two of their top talents to Liverpool in the calendar year. It also illustrates a frankness that's been associated with the Spanish fullback of late; the article also discusses his refusal to use Twitter after incurring fines for more or less saying what he said above. He talks about himself as a supporter's player, and if that's the case, the Liverpool faithful will gravitate towards immediately, especially if he turns in more performances like last week's.

* Finally, a decent enough personnel check from Kenny Dalglish, who sees the fitness cloud lifting prior to Saturday's kickoff in London---only Glen Johnson and Steven Gerrard are ruled out completely, which means Fabio Aurelio will be back in contention until he gets hurt in training later today.

The squad selection and team sheet really will be interesting, though, as there's a handful of names that could go any number of ways. Alberto Aquilani and Maxi both missed out completely last weekend but could provide a creative spark, Raul Meireles and Dirk Kuyt started on the bench but came on to little effect, and, along with Enrique, the rest of the outfield signings made their full debuts. The easy money is on Jordan Henderson and John Flanagan to come out, with Kuyt and Martin Kelly in, but we'll have plenty of time to discuss all that when the preview post goes up later on.

Moral of the story: Almost everyone's fit, so soak it up while it lasts for the next ten minutes.

Back a little later on with the preview post, along with any news of the day that I've missed between the time this runs and anything else that goes on. Until then, you know you're going to have to eat, so you might as well take tips from the master: