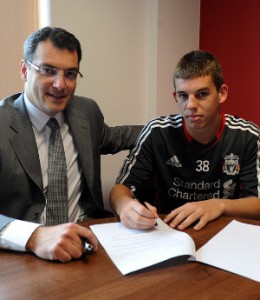 Friday's here, I'm leaving town, I've come to accept Charlie Adam, and there's a good chance that if I don't get straight to the point I'll say something embarrassingly lustful about Raul Meireles omigodilovehimsomuch:

* Following the signing of Charlie Adam and the extensions given to Glen Johnson and Andre Wisdom, Damien Comolli took a break from smiling deviously to chat with the offal about the the new boy, what the club's intentions are in the transfer market, and his feeling about things have proceeded so far. A couple of the more broadly based questions and answers:

Liverpool have been heavily linked with a lot of players. This is our second signing. How happy are you with how things are going in this transfer window?

We are very pleased because the two signings we've done were absolute priorities on our list. When you go into a transfer window you always have X number of targets, and it's very rare you get all of them. We're lucky we've got two of our priorities. That's good, and I'm sure there'll still be a lot of movement, especially going out but also, hopefully, a few more coming in.

There is a lot of talk in newspapers about our strategy in the transfer market - is there a strategy and, if so, what is it?

There is always a strategy. It's about players who we've identified through the year. You identify players in positions where you think you're weak or, if not weak, you think you can get better or add an extra body. There is a strategy in terms of profile of players we want to bring in: the mentality, the attitude, the work ethic - and the age is also a factor. People think about the citizenship and passport - but this doesn't really matter as much as what I've just said.

It's always interesting to hear what the folks in charge have to say about the club's dealings, but rarely do we get much beyond the surface, and, despite the probable rush to guess about who he's referring to with the "going out and coming in" bit, this doesn't seem much different. It's relatively similar stuff to Comolli's comments earlier in the summer when the Jordan Henderson deal was done, just without the focus on player nationality.

We've all known that Liverpool (or any club for that matter) look for players in positions where a weakness is present, that they look to improve in positions that they feel they can, and that there's attributes that come into play when the club's looking for talent. We're certainly not entitled to anything more than the genericisms that Comolli's proficient at, and from the looks of things we'll have plenty of waiting left to do. Which, after the way things went in the past few years, is a welcomed, if occasionally frustrating, change.

* Three days, three defenders' contracts renewed. Wednesday it was Glen Johnson, yesterday it was Andre Wisdom, and today it's wunderkind John Flanagan. Pressed into emergency duty because of a plague of injuries at the back, Flanagan played beyond his years in filling a much-needed gap in the latter half of the season. He made a confident full Premier League debut against City at Anfield, and continued to perform admirably as part of a resurgent Liverpool back line.

Not to completely rehash yesterday's discussion, but we can tentatively say there's a depth in quality at the back that's encouraging enough---Martin Kelly, Flanagan and Robinson were the vogue topics this season, but Wisdom's coming up quickly, and Danny Wilson's still got more than enough time to develop into a first-team regular. Just like that, a back line full of promise, all age 21 or younger, and three of the five mentioned here became regular contributors during the 2010-2011 season. The searches at center- and left-back won't likely end, but there's cause for optimism.

* We're on the downslope of Adampalooza, and as such there's some loose ends being tied up. First is the shirt number---Charlie Adam will retain his 26 shirt, with Jay Spearing vacating to take up the number 20. Jordan Henderson will take up number 14, which Milan Jovanovic stopped wearing in January, and Maxi will make the switch from 17 to 11, the number he wore during his time at Atletico.

The other closing-down of the Charlie Adam deal is getting the manager's take, so today we hear from Kenny Dalglish about how he sees the Scottish midfielder fitting into his Liverpol squad:

"We're delighted our patience has paid off. We tried to sign Charlie in January. Blackpool wanted to keep him, which is understandable because they were trying to maintain their status in the Premier League. Our interest never went away. Both the club and Charlie have been patient, and then Blackpool's circumstances changed because they were relegated.

There's something to be said for the parties on both ends of the deal regardless of how much you like or dislike the signing---it seems that Adam had interest from a few different clubs but wanted Liverpoool, and, as both Comolli and Dalglish mention, the club were able to pursue and sign a target they've wanted for an extended period of time. It might not be overwhelming, but it's at least a sign that Liverpool can get their man.

Welcome to the weekend, and tomorrow we'll have a guest post from redtrev73. Look for that early on in the day, and barring any major news or developments it'll run the length of the weekend. We'll also be around, both here and on Twitter---if you're looking to get in touch with Noel that's the place, and I'll be increasingly active here, mostly for alcohol-fueled debates.

Hope you all have a nice Friday and are enjoying the summer so far, and if not, there's always some stonerized George Gershwin to get you in the mood: