Renewals in Defense, Gerrard Out for Asia, and Other Thursday Notes

Share All sharing options for: Renewals in Defense, Gerrard Out for Asia, and Other Thursday Notes 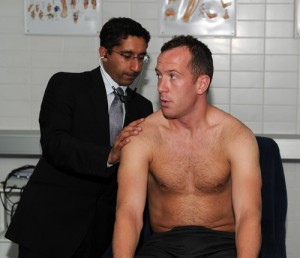 As a fair few mentioned yesterday, one of the residual effects of the Charlie Adam really for real this time medical is that we can stop talking about what might actually be happening. We saw him arriving with Kenny Dalglish, we saw him getting all checked out by Zaf Iqbal in the Melwood training room, and soon enough we'll see him putting pen to paper. The days of wondering if anything would actually happen are gone, and if nothing else, that there's a conclusion is welcomed news.

The downside is that now we have to find something else to run into the ground---the early frontrunners are potential new formations that have people out of position, exclude Liverpool's best midfielders, and are BRITISH BRITISH BRITISH, along with the Stewart Downing "negotiations". Only time will tell which one ends up being our new hate figure, but I'm confident in three weeks time we'll be cursing someone.

For now, though, the Thursday news and notes:

* Not completely buried by the Charlie Adam news from yesterday was the story that Glen Johnson had further extended his contract with the club, which was met with mostly positive sentiment. He proved to be both adaptable and influential as Liverpool improved during the 2010-2011 season, and while he's struggled to shake the criticism that he's not that good defensively (which really isn't, you know, wholly accurate), an extension is well deserved. Noel's favorite organ harvester had this to say about Johnson and the contract renewal:

"It's obvious when you watch him play his technical ability is second to none. Physically he is absolutely fantastic as well and his fitness level is great. Towards the end of last season he showed how versatile he is by playing at left-back or right-back - mostly at left-back - and was outstanding.

"For us he is a great asset to have around. As we've always said, we don't want to sell our best players or sell our assets and as long as the players are happy to be here, we're happy to commit to them."

Johnson also spoke about the renewal today, which accompanied the news that Andre Wisdom had also extended his Liverpool stay. If you watched much of the club's lower levels last season, you probably came away thinking that, despite much of the hype around Suso and Sterling and Coady, Wisdom has the potential to be one of the more consistent performers at the senior level for years to come.

With Johnson renewed, Wisdom coming through the ranks, Martin Kelly back to full fitness, and the late emergence of John Flanagan and Jack Robinson, all of a sudden Liverpool's looking relatively deep (and young) at the back once again. There's not really anything set in terms of who we'll actually see in action though; Emiliano Insua's return may be very brief, Fabio Aurelio hasn't yet had an adamantium transfusion, and Daniel Agger is still in search of a season without an extended spell on the injury list. Even with the aforementioned depth and youth, that leaves a need to bolster at left back and centrally---Jamie Carragher and Martin Skrtel finished the season strong, but the former's only got a few years left and the latter's inconsistencies are too frequent for anyone's liking. In the absence of any additions, there's still a high-level back line available, although I'd hope there's still activity left to take place in the transfer market.

* Earlier in the week it was announced that Steven Gerrard would be sitting out the upcoming Asian tour to attempt to ensure that he's available for the start of the 2011-2012 campaign, news that was met initially with indifference. Over the last couple of days that indifference has given way to broader concerns about the captain's long-term fitness, though, as he's not getting any younger and has had a hell of a time staying fit over the past few seasons. At current there's nothing substantial to contribute to the worry, and it could very well turn out that he's fit and ready to go on August 13th.

But it is enough to spark discussion about the captain's place in the side moving forward, and more specifically how his long-term future affects the decisions the club are making in the transfer market. The newly-found depth after the signings of Charlie Adam and Jordan Henderson is encouraging, but with more than a few seemingly content to see the backs of Alberto Aquilani and Raul Meireles, combined with Gerrard's niggling groin, all of a sudden there's not that much depth in central midfield. Lucas is and should be the staple, and Meireles was second best all season long---beyond that there's little that's settled, and it's looking less and less likely that we can count on Steven Gerrard as one of the first names on the team sheet for years to come.

* Lastly, there's a new(ish) blog to accompany the recently created NextGen Series, which, if you're not up to speed, will be a competition for the U19 squads of sixteen different European Clubs. Liverpool are among the teams included, and they'll be tracked along with the others at the Next Generation blog. Mal Bennett, who's one of our buddies on Twitter, is the man in charge, and he's overseeing a range of contributors currently previewing the squads involved.

Shaun Howland's been responsible for the Liverpool preview in the past week---you can catch part one here and part two here. Both pieces are lengthy and in-depth, and both include plenty of names you're likely familiar with. There's no doubt it'll be an interesting competition to follow, and with the younger players at Liverpool experiencing a relative rise to fame in the season gone by, it's nice to have a resource that focuses squarely on the squad and the competition.

That's Thursday wrapped up, and I'll plan to be back tomorrow with any other miscellany before we run the weekend's guest post. Brief reminder that if you're interested in writing something for the blog and having it run over the weekend during the summer, go ahead and get in touch at liverpooloffside@hotmail.com to let us know.

Until tomorrow, then, and in the meantime, get back to spending your summer building a mega Slip 'n Slide: