Gerrard Out Until September and Other Saturday Notes

Share All sharing options for: Gerrard Out Until September and Other Saturday Notes 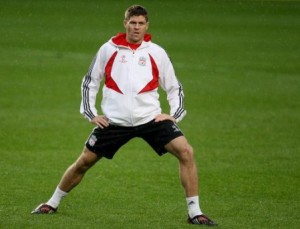 News involving the fitness of two of the club's bigger names, so let's get right to it:

* There's a time and place for "I told you so," and while right now might seem like it's right time, I'd urge you to reconsider, if for no other reason than the fact that the ongoing fitness (or lack thereof) of Liverpool's captain has become something of a sensitive issue. Nobody really needs reminding that Steven Gerrard's struggled with injuries over the past few seasons, to the point that many have started to question how he fits into the regular eleven even when fully fit.

So the news that he'll be out until September while undergoing treatment for an infection in his oft-afflicted groin isn't that surprising, but it's still disappointing and concerning.

Steven Gerrard today began a course of antibiotic treatment for an infection related to an ongoing groin problem. He is expected to remain in hospital for several days while the precautionary procedure is completed.

The player will then return to Melwood to continue his rehabilitation programme and is expected to be available for selection in September.

Earlier this month we talked about the potential for Gerrard's groin to be an unfortunately relevant topic of conversation for the foreseeable future, and while it was mostly theoretical stuff at that point, it's clearly time to renew the discussion. The talk of Meireles' exit has thankfully cooled, and nobody knows what's happening with Alberto Aquilani, so for tight now it's only minus one (albeit a big one).

Replacing Steven Gerrard is an impossible task and one better left for Martin Samuel or Henry Winter, so I think we're more suited to talking about how Liverpool play without the captain---something that, after the past few seasons, we've had plenty of chances to see. We know what Meireles is capable of creatively, Aquilani could still fit somehow, Lucas and Jay Spearing spent most of the final months forming an effective partnership, and the additions of Charlie Adam and, perhaps to a lesser extent, Jordan Henderson provide cover in central midfield as well. There's still decisions for Kenny Dalglish to make, and I still think there's enough depth, but confirmation that Gerrard will be out for at least the first few weeks of the season is undoubtedly a blow.

* The good news of the day (even if Justin undercut us yesterday with it) is that we won't have to wait much longer to see Pepe Reina back in goal---apparently his double hernia surgery was successful and left no lingering worries, and he hopes to see match time on Monday night in Norway:

"The target is to play in Valerenga, and then after Valencia there is one more week and that should be good enough to get that fitness. Just because of precaution, we didn't want to rush it - there was no point in doing that. I'm totally recovered now, training with the team as normal and looking forward. I can't wait to play again. It wasn't that nice because my holidays were in the same time as my operation. But after three years without having a proper holiday, I did rest a little bit more this season."

With Reina more or less confirmed for Monday, that leaves a handful of other potential first team regulars in contention for an appearance---Meireles, Daniel Agger, Jamie Carragher, Glen Johnson, Stewart Downing, Martin Skrtel, Jordan Henderson, Charlie Adam, and Maxi Rodriguez among them, although a few are struggling with some sort of fitness concern. Monday's probably not the day to test those that are still recovering, but if fit, I'd guess we see something much closer to a first choice eleven, and I'm hoping that we get a lengthier look at what Liverpool's really capable of.

And, while it'll be nice to see Reina back in action, there's still the small matter of Liverpool putting together a defensive performance that actually gives the goalkeeper a chance, as they've done a not so great job of welcoming Doni to the squad so far.

* Lastly, if irreversible corruption in world football is something that interests you, there's the preliminary draw for the 2014 World Cup in Brazil occurring at the moment. You can follow on FIFA's official website, where they're doing a liveblog and getting in-depth impressions from those involved, like the fact that Iran head man Carlos Queiroz is "feeling relaxed." Dynamite stuff. Anyhow, it's something to look forward to in the long term, just don't be surprised when everything in the draw goes exactly how it should if the people in charge are selling group spots, and then England storm through their group and are pronounced front-runners for the competition, only to be dragged down by scandal, infighting, and archaic tactics that won't win anyone anything.

Preview and matchday thread for Valerenga will be up tomorrow morning, and if anything important happens until then we'll be sure to get things updated around here or over on the Twitter. Worth giving us a follow if only to temporarily boost our egos, which can only be a good thing.

In the meantime, the cartoon version of you can jam out to Bloc Party and then ride a giant beetle through the sky: