**This week’s guest post comes from Joel, who’s a regular around here and contributed a post earlier in the summer. Written before yesterday's loss at Hull City, he dissects the tactics used in the first two friendlies and what we're likely to see going forward. You can get in touch with Joel on Twitter or through us at liverpooloffside@hotmail.com.**

With two friendlies under the belt, we’ve been able to get a glimpse into how Liverpool will set up during the coming season. And with a few moves in the transfer market complete and others yet to be completed, the personnel picture is beginning to resolve itself. So, it seems like a perfect time for the perennial off-season favorite: armchair managing! In this weekend’s edition, let’s take a look at what formations we’ve seen from the friendlies and which we may see in the upcoming season.

During the first half of both of the friendlies, we saw a dynamic, movement-oriented three man inverted triangle in the center of midfield. Agains Guangdong, Poulsen, Spearing, and Shelvey played together, nominally set up with Poulsen sitting deeper than Spearing and Shelvey. While Poulsen was generally the deeper player, both Spearing and Shelvey dropped to the point of the triangle to bring the ball out of defense with Poulsen cycling forward when they did so. This created a midfield group which looked to fill spaces and use short, slick passing to move the ball up the pitch. Shelvey appeared to be the dominant player in this grouping, with the other two primarily allowing Shelvey to take the initiative and providing support as needed.

Against the Malaysia XI, we saw the same style of midfield, but with Coady playing the deeper role behind Adam and Spearing. In this grouping, Adam took was the dominant player, playing on the left point of the triangle, as Shelvey did against Guangdong. Pass and move was again the name of the game, albeit with a good infusion of Charlie Adam long range passing. Adam looked to dictate play up and down the pitch, with Spearing providing close support and Coady sitting deeper while providing occasional runs forward.

Looking at the specific roles, we see that there is not really the traditional destroyer-passer-creator midfield trident. Rather, Dalglish’s midfield three is a much more fluid system, with each player expected to take parts of destroyer, passer, and creator into their play. The roles in this system appear to be more positionally-based rather than duties, with one player acting as the dominant force, one player providing support in the 5-10 yard area and the other providing support in the 10-20 yard area. Notably, the player providing the close support moves ahead of the dominant midfielder much more regularly than the deeper support player, who rarely makes forward runs and generally only in situations where he has moved forward in the formation due to another player dropping deeper.

Thus, it appears that this formation is less like a traditional 4-3-3 midfield and is in fact a more fluid variation on a 4-2-3-1. Rather than an advanced playmaker in a free role ahead of a double pivot partnership, we have one player tasked with dictating the game and the other two providing varying degrees of support. The main difference is that each player has a less distinct role and each player has some balance of defensive and offensive responsibilities. Rather than simply looking for space when the team is without the ball (as in a traditional trequartista role), the dominant player looks to retain the midfield’s shape in defense, with all three players working as a unit to defend in front of the back four.

Ahead of the three man midfield unit, we saw two attacking midfielders/wingers. The roles of these players in this formation functioned as a hybrid of the wide players in a 4-3-3 and a 4-2-3-1. While looking to provide width on the defensive back line when necessary, they also drifted infield to link up play and dropped back in defense to provide cover for the fullbacks. These roles fit in with the fluid concept behind the three man midfield unit, as all five players will look to fill space to move the ball forward, with the weak side attacking mid pushing wide to open gaps in the defense.

In the second half of each of the friendlies, we saw a slightly different style of play from the central midfield area. Against Guangdong, it was Aquilani, Coady, and Adam, while against Malaysia, it was Aquilani, Shelvey, and Poulsen. Being the common denominator between the two games, Aquilani also took the dominant role in this formation. This formation was essentially the traditional double pivot behind and trequartista ahead. Both deeper midfielders looked primarily to hold position in front of the defense with noticeably more attacking impetus from the fullbacks. Aquilani was without a doubt the primary creative axis in this formation as the ball was rarely moved from defense to attack without a few slick touches from the Italian’s boots. Notably, Aquilani was not adverse to tracking back and putting in defensive work, as he generally dropped back to pressure the deeper midfielders on the ball and cut off passing lanes.

However, since this formation centered on the use of Aquilani, a player whose future at the club is somewhat foggy, it’s not clear if we’ll be seeing this at all during the season. While Gerrard, Meireles, and perhaps Adam could play this role, they’d all likely be more effective in the previously mentioned formation. If Aquilani stays, I suspect we’ll see this formation when looking to play prominently between the oppositions’ defensive lines.

What is Kenny likely to use?

So what might we see during the coming season? I suspect that 4-3-2-1 may be the primary formation used by Liverpool, based on the moves in the transfer market and prominent use in the friendlies so far. However, we have been lacking Lucas, Downing, and Suarez in the matches to date. When they’re available, I suspect that Suarez and Downing will primarily play as the wide attackers with Carroll leading the line, and Lucas to slot into the midfield along with two of Adam, Gerrard, and Meireles. In Carroll’s absence, Suarez would lead the line, flanked by two of Downing, Kuyt, Gerrard, and Maxi. 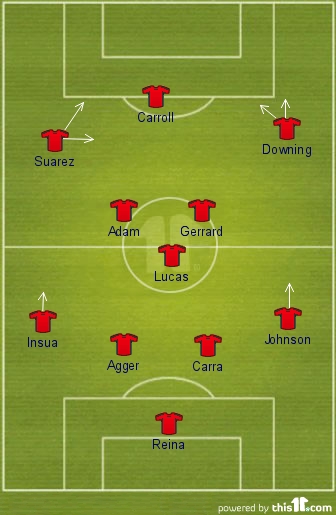 As noted above, the use of 4-2-3-1 is likely dependent on whether Aquilani decides to play his football in Liverpool or Florence this next season. The players would likely remain the same as in the 4-3-2-1, with the midfield comprise of Aquilani and two from Lucas, Gerrard, Adam, and Meireles. However, I think this formation would likely feature Suarez leading the line, as his movement would be much more effective ahead of Aquilani than would be Carroll’s power and aerial ability. 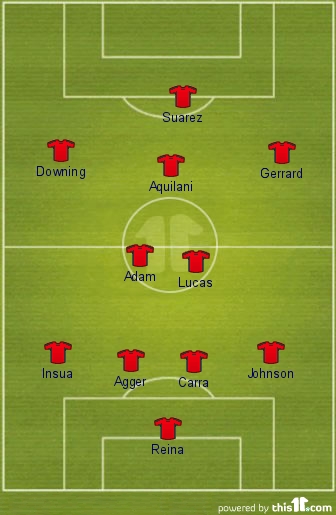 It’s also likely that we’ll see a fair amount of the 4-2-2-2 that was predominantly used under Dalglish last season and I broke down in a previous post earlier in the summer. Using Downing and Kuyt/Gerrard/Maxi wide with Lucas and Gerrard/Adam/Meireles/Aquilani in the engine room we would see a blend of power, width, slick passing, and quick movement. 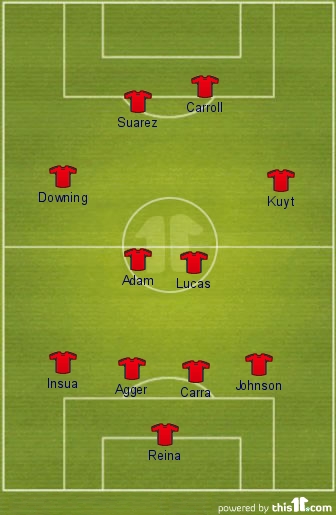 **Another reminder that you can submit a guest post if you're interested---we've only got two weekends left before the season starts, so if you're interested just send an email to liverpooloffside@hotmail.com with questions or your completed post.**