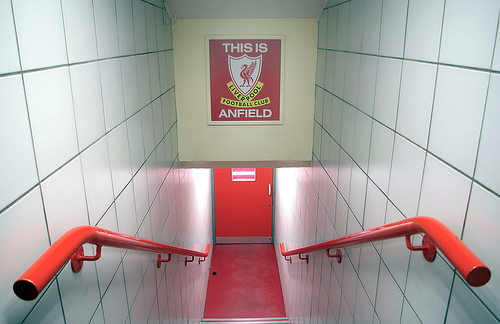 **This week’s guest post comes courtesy of Tony, who’s been commenting regularly as Tropics Red and contributed a post earlier in the summer. He discusses his experience visiting Anfield and his opportunity to rub elbows with some of the club's legends. You can get in touch with Tony through us at liverpooloffside@hotmail.com.**

I arrived at Anfield like a school kid going to an amusement park; the widest grin on my face giving away to any passer by how over excited I was. If it wasn’t a dead give away, that I was fidgeting constantly because I was full of nervous energy surely did!

The doors opened and I walked inside. Now, the day is spent with a Liverpool Legend and I knew going into the day that our Legend was going to be David Johnson - I was just too young to remember him; his replacement Ian Rush being one of my earliest idols.

The ‘experience’ starts with a ‘footballers’ breakfast and whilst we’re wandering around the buffet tables eying up all of the goodies (I’m sure some of the foods on offer to us paying for the experience wouldn’t be part of a match day breakfast) the host tells us that we’re to be joined by another ‘legend’ for the day.

At this point, I’m blown away because I’ve just spied who it is; well I think I have, because now I’m not quite sure because there’s a different look to someone when they’re not dressed in the clubs kit and running out onto a football pitch.

To my delight, my initial thoughts are confirmed when the host announces that Jan Molby http://www.liverpoolfc.tv/history/past-players/jan-molby will also be joining us. No offence of course to Johnson, but I’d never seen him play.

Big Jan however was a different matter altogether. He was in the team from ’84 (I’d been following football for about 2 years) into the 90’s and I’d seen him play numerous time. I’d watched as he orchestrated games from the middle of the park. I’d look forward to watching him absolutely belt the ball in past the keeper from the penalty spot. My Dad used to say he hit a penalty so hard that the ball had bounced 5 times before the keeper even landed!

We mingle and exchange pleasantries and if I’m honest I’m star struck. Molby puts us at ease with his easy going nature, but its Johnson who has us in fits of laughter with his inimitable ‘Scouse humour.

A major part of the day is to head off to ‘The Academy’ to have a tour of the facilities and hit the training pitch for some drills and a game. I think I’m going to burst !!

The coach ride is an eye opener as I didn’t realise how far from Anfield the Academy is, and the excitement builds as we journey through Kirkby. As we pull into the facility, the main training pitch for 11 a side matches is directly in front of the Academy main building and it looks amazing. We hop off the coach and are led around the back of the building and see the multitude of training pitches with a whole bunch of youngsters being put through their paces. You never know who’s going to turn up here says our guide and proceeds to explain that ex players and others associated with the club still drop in to have a look at the kids and are brought in to talk with them and offer some support or tips.

We are then led though the building past offices and players lounge to the dressing rooms. It’s well appointed and warm – I could almost attest to under tile heating! We get changed into our training kit. I’ve brought my standard training kit that I wear for my amateur teams training sessions, and realise that everyone else has brought their replica shirts. Without thinking straight I’m in bl00dy blue!! We’re led out the front and to the massive warehouse space to the side of the main building and only then do I realise its a huge indoor astro turf pitch.

We’re put through our paces with a matchday warm up and then some technical drills (we’re paying guests, so I can’t see them trying to put us through any of the fitness drills!!). I can tell you that as an amateur footballer, these drills looked relatively easy, but were far from it. Chipping the ball into a basketball ring (or in our case simply trying to get the ball anywhere near the back board!), curling the ball into the goal round a wall, chipping the ball over a player, passing to hit targets shooting under pressure etc etc

Then they call us round and separate us into two teams. I’ve got Johnson on my side so i am going to be playing against my Kop Idol. The match kicks off and its obvious from the start that not everyone has played the game at a serious level. I’m a keeper, but played out on pitch as there were guys who had ten/fifteen years on me who were keen to be ‘in nets’.

I can’t tell you much about the game. I think an element of competitiveness surged into everyone. I can tell you that both ‘Legends’ have impeccable technique and if anyone reading this has played or is playing at any standard, I can tell you that the way they control the ball and distribute it is something you’re not used to seeing on a Saturday afternoon in town league football. There is a difference. I can’t explain it precisely, but simply put, they just do it. There’s no effort. There’s no expression of concentration which gives away the amateur footballer.

I would love to tell you all about my mazy runs and metronomic passing, but I can’t. I did score, and I did take the ball of Molby. He also said to me “you’ve obviously played a bit then?” I WILL NEVER FORGET THAT. Being acknowledged by a former professional footballer as having at least a semblance of ability. Of course, in the presence of guys ranging from 20-60 and having at least played competitive football, it was a statement of the obvious, but I’m going to take it as something different. I’ll always remember it as Jan Molby identifying me as being standout enough to make a comment to! At 32 or thereabouts, I started to think about being scouted, about running out on to the Anfield pitch, the commentators mentioning me as the latest product of the scouting network, and that it goes to show that talent can be spotted and dreams can come true with the right application and a bit of luck.

I’m brought crashing down as we’re told to head off and get showered. The second part of the day contains lunch with our legends and a tour of Anfield.

We’re led into the hospitality area where we’d had breakfast and are told that there’s another surprise as well in that someone is going to be lucky enough to sit at the top table with the legends. We proceed to play a game of chance and by he most amazing piece of luck, I win and take my place at the top table between Johnson and Molby.

I’ve just pinched myself whilst writing this, just to confirm that I am not dreaming about sitting here writing about a time when I ate lunch and chatted about Liverpool Football Club with two legends of the team.

I asked tons of questions and I’m afraid to say I’ve forgotten a lot of what was talked about; we talked about nicknames – Molby’s commonly referred to as Big Jan or The Great Dane, but on the pitch he was ‘Janky’. Alan Kennedy was known as Barney Rubble which was passed down to Jason McAteer as a reference to him not being very bright. I heard stories of Steve Nicol’s capacity for eating crisps and snoring so loud it drove his roommate to jump on him and half throttling him before he woke up. I found out that Molby rated Bryan Robson as his most toughest competitor who was just excellent in all aspects of the game. I found out that Grobbelaar was the toughest player in the team and that Hansen was a huge practical joker. One of the funniest stories I heard was when Hansen wound up Nicol that Kenny Dalglish had been diagnosed with a serious illness. Nicol went to see Kenny and the boys called him up in his room to tell him to play along. He was barely able to keep up the charade when Nicol had remarked that he knew something must have been up because Kenny hadn’t been playing very well! Unfortunately, time was passing way too quickly, but as lunch was drawing to a close when we got another treat – Phil Neal walked in. European Cup Winner, ex club captain and massive legend alongside us mere mortals.

After lunch we got the tour, the plush Home dressing room , the slippery floor of the away dressing room. The area near the tunnel where the players are interviewed. The ‘This is Anfield sign’ put there by Shanks to remind the lads who they were playing for and to remind the away team who they were playing against. The history of the kit – against Shanks decided to go with all red rather than the red with white shorts. The pitch, the Kop – the stories of the days when 50,000 would stand on the Kop and be so packed it was pointless trying to go to the toilet hence the term Yellow Mersey being given to the dip at the bottom of the stand.

Then into the Museum and having a look at the history of the club in its physical form – scarves, shirts, photo’s, cups including 5 ‘Big Ears. It was over all too soon before I was back outside staring up at the Paisley Gates.

What a day. I recommend any of you to do it. I just hope I’ll get the chance to do it again, perhaps when my 12month old son is old enough.