Gerrard and Reina Recover, Pearce Stays On, and Other Monday Notes

Share All sharing options for: Gerrard and Reina Recover, Pearce Stays On, and Other Monday Notes 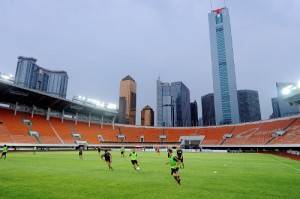 And, just like that, Liverpool are two days away from their first preseason friendly and just over a month away from kicking off the the 2011-2012 season against Sunderland. Wednesday Liverpool are on their way through six friendly matches, starting with Guandong in China and ending with Valencia at Anfield one week before the league opener. Had Liverpool somehow qualified for Europe we'd have started the season already and talked about how promising Joe Cole's been looking against Gaz Metan.

Alas, life can be cruel.

* The club (including Joe Cole, Terror of Rabotnicki) have started their training in China in preparation for their match with Guandong on Wednesday. There were plenty of rumors up front about who wouldn't be included in the traveling party---namely Raul Meireles---along with Steven Gerrard, and a name I completely glazed over was Pepe Reina. If you remember, Reina had double hernia surgery back in early June, so traveling to China was never likely to be on the cards. Kenny Dalglish spoke about the pair as part of his first press conference:

"Steven is injured at the moment and that's why he's not here with us. He has made a fantastic recovery from his operation towards the end of last season. He just needs to get the final couple of niggles out of the way and then he will be fit for the start of the season against Sunderland.

"I know people are disappointed he isn't here with us but the disappointment would be far greater if he couldn't play the first game. That is why he has stayed at home, to rest and to have the best chance of being fit for the start of the season.

"The same situation applies to Pepe - he had a double hernia operation in June. He isn't fit and so had to stay at home. He should be ready for the start of the season."

I won't talk about the captain's continued injury struggles again, as all indications point to the operation being as close to a solution as possible rather than being another band-aid. The same goes for Reina, whose operation came as a bit of a surprise, but with over a month to recuperate, both are apparently in line for the season opener. With little consensus as to how Liverpool will line up this season, there's only a few certainties on the team sheet, and a fully-fit Reina and Gerrard are among them.

* Of circumstantial relevance to Liverpool supporters is the set-up in the England ranks---we've talked constantly about the emergence of Liverpool's youth academy as one of the most promising in the nation, and we saw a handful of youngsters in the U17 World Cup to go along with the first-team breakthroughs by John Flanagan and Jack Robinson. In not-so promising news, at least for those who paid much attention to the U21 Euros in Denmark, Stuart Pearce has been signed to an two-year extension by the FA because "continuity is vital." Yikes.

This likely won't yet murder the dreams of playing attractive, effective football for players like Raheem Sterling and Adam Morgan, but we could see Flanagan, Robinson, Conor Coady, and Andre Wisdom get calls into Pearce's squad as they seek qualification for the World Cup in Israel in 2013. The performance and results in Denmark were disappointing, and this more or less signals that nothing will be changing anytime soon, so there's really no reason to think that things will actually be improving. But hey, continuity and 1966 and all that, major trophies coming soon!

* And lastly, another call for Trevor's guest post from the weekend about how there can still be a sense of community and mutual respect among Liverpool fans despite the troubles of the past few seasons and the craziness inherent in the transfer window. It's particularly timely with the discussion about the different directions the club could take with the stadium developments, as well as the potential for more player movement in and out.

Time's running short if you're interested in writing guest post of your own before the season starts---we haven't discussed the idea of doing them during the season, as most slots on a day-to-day (and especially weekend) basis are filled, but there's a handful of weekends left for contributions. We've had a blast reading and posting everyone's submissions thus far, so please feel free to get in touch at liverpooloffside@hotmail.com if you'd like to do one.

That about wraps up a fairly slow Monday on the Liverpool front; all the internationals have dried up for the time being, unless you've jumped on the USA Women's bandwagon, then it's all sorts of fun you didn't expect. More to come tomorrow, so in the meantime you can listen to the Toots and the Maytals while watching scenes from things that have nothing to do with each other, because, you know, it's Monday: