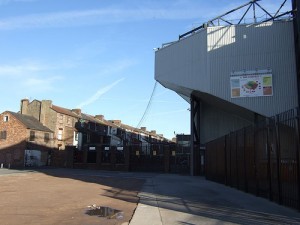 Of the many positives brought to the club in the past year has been a return to doing business behind closed doors. Frustrating as it may be when we want to know who's coming and who's going during the transfer window, it's a sign for most that the people in charge have their fingers on the pulse of the club and its supporters. Upon first arriving, the new owners spoke of doing more listening than talking and more delivering than promising, and, for the most part, that's been the case. Rare are the opportunities that we get a glimpse of what's going on behind closed doors; the much-heralded "Liverpool Way," muddied and damaged during the reign of Tom Hicks and George Gillett, has been rediscovered.

So it's noteworthy when we do hear about the inner workings, making today's news about the apparent struggle to redevelop Anfield deserving of our full attention. Transparency on this issue is more in line with the acknowledgment of Fernando Torres' transfer request than Damien Comolli discussing the fact that Liverpool need players in positions where they're weak---there's some meat to Ian Ayre's lengthy statements, and it seems clear that releasing those statements has less to do with keeping everyone in the loop than it does with making a stand about their preference.

I hesitate to completely copy-and-paste the Ayre's quotes, since you can just hit the link above to head to the official site, but here's a few excerpts so everyone's up to speed:

"In terms of a Stanley Park stadium versus redevelopment, there is absolutely no question that a refurbishment of Anfield would come at a significantly lower cost than a new build. A new stadium of course also has its merits, being modern, more functional, and easier to construct. However, a new 60,000 capacity ground also comes at a significantly higher price, while at the same time only delivering roughly the same amount of revenue as a refurbishment of Anfield - with both options offering an uplift of approximately 16,000 seats each."

After initially discussing the work done by the new ownership group and everyone involved with the project, Ayre moves on to contrasting redevelopment with a new ground on a number of levels. The "modern, functional, and easier" argument is about as far as Ayre goes in the entire release, though, as he appears far more interested in advocating the merits of redevelopment and the disappointment they've experienced in pursuit of getting a redevelopment project pushed through:

"It's disappointing that based on where we are at the moment, we seem to be unable to press on with the more viable economic option of a refurbishment, but we remain committed to finding the best possible long-term solution...

"We are mindful that supporters have been promised a solution in the past and have been disappointed, and also that local residents would like to know what direction we are headed in. However, just like any other business, we can only proceed as and when we are clear on all elements and we will not be forced to make a decision that is not in the best long-term interests of our club and we will not make any promises to our fans that we cannot keep. We will continue to work diligently on this project and keep our fans informed of any progress."

And here's where the stance on the project seems to really show itself---"we will not be forced to make a decision" appears to be a rebuttal to the council's stance that, in accordance with the promises made under the previous owners, a new stadium is and will be the best option. The new owners have done plenty of work to erase the memories of the failed tenure of Hicks and Gillett, but it seems that when it comes to a new stadium project, at least for the Liverpool City Council, FSG need to follow through on past promises. As Council leader Joe Anderson states, a new stadium could not only have promise for Liverpool Football Club, but for a "regeneration that the area so badly needs."

While we can guess based off the quotes from Ayre and Anderson, it's hard to fully know from the outside looking in just how difficult a task club ownership faces; "land/property acquisition, environmental and statutory issues" are likely tall tasks to overcome separate from one another, and when they're put combined in addition to the fact that there's opposition coming from an influential position, Ayre's expression of frustration on behalf of ownership doesn't just appear to be a public shoulder-shrugging.

So what we're left with is, even now that we sort of know the club's official position, a whole lot of uncertainty and two contradictory views on what's best. On the one hand it's nice to get an idea of where things stand, and that the club are willing to advocate for a position that they feel is in their best interest, but on the other we're staring down the barrel of yet another dispute involving Liverpool Football Club. Different parties involved, and very unlikely that things will be handled in a similar manner, but another period of uncertainty to add to the number of conflicts the club has endured in the past few years.

We'll continue to track and report on the situation so long as there's anything concrete, and given the apparent interest on both sides of finding a resolution as quickly as possible, there'll be more to come.

**Edit: In discussing this with Noel, he mentioned something that I blew past, which is the possibility that part of the rationale for releasing the statement was to enlist supporters in helping pressure the council in some way. It's a great point, particularly in light of FSG's hesistance to discuss club matters publicly. I won't bastardize his sentiment by discussing it further, but thought it worth mentioning.**