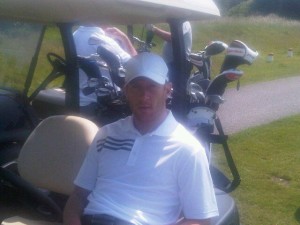 The drama over Raul Meireles is possibly unfounded, probably overblown, and most likely something that will send me into a coma. That's no reason to avoid the situation, though---peoples on the Twitter have assured us that other people score more goals and play golf more often, so there's not much to worry about. Regardless of who ends up in Liverpool's central midfield, there's a good chance they'll be nearly bald.

That doesn't mean you have to stop loathing Charlie Adam/Raul Meireles/yourself, though, as there's plenty of reasons for any and all of the above. And if you're just enticed by the fact that we're talking about transfer rumors, it's a perfect storm. Copping to the fact that you're only hanging around on the off chance that you can pick a fight with someone about transfer rumors makes you honest, and it makes you an asshole. Result!

So congratulations, you honest asshole, here's this week's rumor mongering:

Nobody cares! Whether he does, whether he doesn't, this has turned into the most anticlimactic transfer story of the summer. You can be for it, against it, or ambivalent, but any way that this thing turns out it's less than captivating. A large part of this is down to those that have made his signing a part of their everyday fare---not a day has gone by that we haven't heard about an imminent offer, medical, or signing, and the glory of it all is that there's only two months left in the transfer window! Oh, that's no good?

Raul Meireles: The rumors that won't die now seem to have gained actual traction, with sources that aren't entirely awful reporting that there's some sort of contractual disagreement between Meireles and the club. As with everything you wish would be forgotten, it has to do with the former owners; apparently he was ensured some sort of pay raise after a season's work, and now that a season has gone by, Meireles and his agent are looking for increased wages. There's not much more for me to say about how my feelings on this situation or how important I think he is to Liverpool---pay the man.

Juan Mata: As I noted yesterday, the object of our affection has now been linked with a bid from Arsenal; the man himself had stated that he was going to wait until the end of the U21 Euros to start conversations about his fate for the 2011-2012 season, so it was little surprise that we heard about a bid first thing Monday morning. Only problem is that it came from Arsenal, not Liverpool. With so much time left in the window and the performance he gave in Denmark, there's plenty left to hear about how things shake out.

Pepe Reina What the Fuck Not Again: I hadn't heard anything about a Reina exit rumor since he spoke out a few months ago, but I guess there was something out there that needed refuting. With David De Gea headed to the red half of Manchester, Atletico were always going to be looking for a new number one, but after Reina's recent recommittment there's little chance he's moving elsewhere. Not that Atletico would have been the destination, or where exactly that came from, but nice to have almost immediate confirmation as to whether or not something is happening.

Connor Wickham: Young! English! Expensive! Etc Etc! Connor Wickham's name has been thrown around for awhile, and while the signing of Jordan Henderson seemed to momentarily killed the push for all things English, Liverpool's back in the mix as Sunderland and Ipswich have reportedly agreed a fee of £13m. Whether or not that means Liverpool are actually interested in a bidding war for the striker is one thing, but you know, Daily Mail and stuff.

Other People that Have a Pulse: By all accounts the Doni talks are a done deal in the wrong direction, with the former Roma keeper ruling out a Liverpool move because he wasn't going to get the wages he felt he deserved. If only Liverpool could shed themselves of those players earning way too much, like Raul Meireles. Also, Stewart Downing is still floating somewhere in the ether, and he's reported to be turning in a transfer request to make his move to Liverpool possible. That is, until he's bid on by every other club that's looking to pay over the odds for a decent enough English winger. Then he'll be headed elsewhere.

Don't bother reassessing what you've actually learned from today's rumor mongering, because we both know you didn't come here to learn. Plus there's probably no quantifiable way to express how much these posts mean to you, and I wouldn't want you to feel embarrassed when you find yourself lacking the words.

This is also me tapping out for the week---Noel's taking over through the weekend to handle things and celebrate the Charlie Adam deal(s) while I drag a UHaul across the United States. So, it's mostly a push. But if you're on the fence, consider this: