Morgan Scores, Myths About Meireles, and Other Thursday Notes

Share All sharing options for: Morgan Scores, Myths About Meireles, and Other Thursday Notes 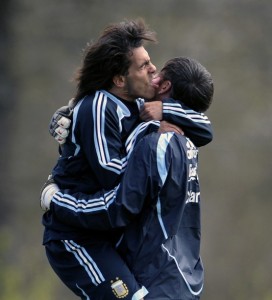 We're in the midst of a difficult stretch around these parts, and around any parts involving Liverpool. There's no actual news to counter the steadily-flowing river of bullshit---aside from the youth international competitions we've used as methadone, there's few fixes to be had. I suppose we can look to the opening of the transfer window on July 1st as some sort of false dawn for all the pants-tightening Mata news your little heart can handle, although I think we all know that in reality, July 1st is just another day to end up drunk and alone.

But if the alternative is getting mounted and licked by Blanka's father, Carlos Tevez, I'd gladly stomach a few half-drunken evenings of disappointment and anger. Liverpool had a bout of tickling and ear-flicking in their training sessions earlier in the year (and who among us hasn't?), and from the looks of it, things are progressing quite naturally as Argentina prepares for Copa America to kick off next Friday.

So to recap---drunk and alone, or getting licked by Carlos Tevez. Your choice.

* The U17s are on their way in Mexico, with four of the six groups having played two of their group stage matches. We've obviously been focusing on England, whose Liverpool contingent have made an impact in the win over Rwanda and yesterday's draw with Canada. Adam Morgan, Raheem Sterling, and Matty Regan all started and completed the full 90, with Morgan flicking on a free-kick in the 46th minute to give England the lead. Canada drew level minutes later, only for England to retake the lead in the 77th minute through Blair Turgott. England's chance to go even on points with Uruguay was dashed in the 86th, though, when Canadian goalkeeper Quillian Roberts scored from his own half to give the Canadians their second.

Brad Smith and Tyrell Bedford didn't feature, but the former picked up a knock in the opener and was a doubt in the build-up. Jack Dunn made an appearance in the final ten minutes, giving England four Liverpool youngsters on the pitch at the final whistle. Had Smith come out of the Rwanda match unscathed, we'd likely have seen Liverpool academy members composing nearly half of England's lineup, which is impressive no matter what level it's at. And, given the opposite directions being traveled by Liverpool's academy and England's national team setup, that's a good thing.

* Another day, another dumbshit article about how Raul Meireles was good but you know he wasn't really that good because he didn't play centrally that much and couldn't get a game and hi my name is David Maddock I'm not quite sure what the fuck I'm talking about:

And perhaps surprisingly, that clear out could begin with Raul Meireles, who was the only one of last summer's signings to make a real impact at Anfield. The Portugal international midfielder was voted fans' player of the year after a promising debut in the Premier League, but he failed to hold down a place in central midfield for the Reds.

Instead he was often used wide of midfield, and with Downing and perhaps another winger on their way to Liverpool, his options would be further limited, as would his chances in the centre with the capture of Jordan Henderson and Adam.

As we've said before, trying to argue that Raul Meireles should leave because he couldn't get a game in central midfield is just plain wrong, and working to strengthen that argument by pointing out that other people might show up at some point is flimsy at best. If Meireles is, by some act of the devil, actually sold, it won't be because he played out wide from time to time, or that he wasn't good enough to play in front of Jay Spearing. Meireles was a mainstay in the starting eleven and had an impact regardless of where he was placed, and his stint wide was less about being "pushed out" of central midfield and more about providing cover in an area in which Liverpool were sorely lacking. So stuff the argument that he wasn't good enough or couldn't get a game---if he's sold, it's because Jesus hates me.

* Lastly, we all know that Joey Barton spends most of his free time trotting the globe committing felonies for the thrill of it, but there's also small chunks of time when the stars align perfectly and he makes something resembling sense. His opinions on the state of English football are typically accurate, and we're left to hope that he's accurate in his assessment of how Andy Carroll will fare at Liverpool:

"It’s always difficult when you go to a new football club and you’re not fully fit. He had a niggling injury when they signed him. He’ll be looking to get pre-season under his belt and look to kick on and show Liverpool what an asset they’ve acquired.

“He’s a great lad and we were all gutted to see him leave Newcastle but it was a no-brainer, really. He had to go and test himself at a fantastic football club with great tradition. I stay in touch and we’re all wishing him well but not when he plays against us!”

Combined with the great comments from Yann yesterday, that first bit is particularly salient; if you're too lazy to click the link, Yann managed to have a chat with Dr. Peter Brukner, who shared the insight that "Andy Carroll’s football environment was less than fully professional in terms of preparation and that the Anfield methods came as a rude shock. This suggests that with a full preseason Carroll will be better placed than previously to tackle a full campaign head on."

Kindly ignore that this means Yann has now had more contact with anyone associated with Liverpool than Noel and I put together (unless Noel's holding out on me), and focus on the encouraging part that Andy Carroll will soon be a robot programmed to score goals and win headers. Also ignore Carroll's six-week drinking binge if we're to believe that last sentence.

That's Thursday wrapped up, then, and a reminder that you can catch us on Twitter if you're looking for updates that are slightly more invigorating than a Martin Samuel rubdown. And, for those who haven't been around, we're still taking submissions for our summer guest posting series. You can send what you've got or direct any questions to liverpooloffside@hotmail.com; we're running posts on the weekends, and had two really good submissions already from Joel and Tony. Please do get in touch if you're interested.

If you're not interested in a guest post, though, you can spend your time teaching your pet gorilla how to break dance: