Apparently Liverpool Have a Third Shirt and Other Friday Notes

Share All sharing options for: Apparently Liverpool Have a Third Shirt and Other Friday Notes 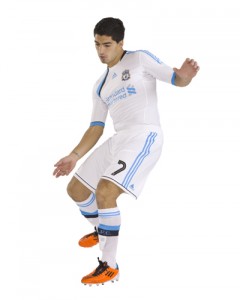 We're going from strength to strength when it comes to things that get everyone righteously pissed off---first it was discussing transfer rumors, and now we move to the recently released third kit. It's obviously the blue that's causing heads to turn Linda Blair style, with most viewing it as an attempt at nostalgia gone horribly wrong. Plus Luis Suarez is hallucinating at right, which probably doesn't bode well unless he's got some seriously strong antipsychotics by August.

But as others have already pointed out, there's not too many opportunities for Liverpool to actually wear this collector's item, with continental competition ruled out and Milan stubbornly staying in Serie A. We'll probably see it at least once in league, and for sure if Liverpool are drawn against lower league competition like Bournemouth or Walsall, both of whom have red and black in their home kits. Otherwise we'll be left to complain to one another about how unfair life is that a marketing gimmick doesn't look like we want it to.

There's other notes for the day as well, so let's get to them before you notice that our Facebook icon on the sidebar has blue in it too:

* A couple of today's notes were picked up in the comments of yesterday's post, and TropicsRed made mention of the first two. First is that Liverpool confirmed the release of four younger players---Deale Chamberlain, Steven Irwin, Alex Cooper and Nikola Saric, which is the first activity on the way out of the young transfer window. None progressed beyond the reserves during their time at the club, but both Irwin and Saric showed glimpses of promise and were, at some point, part of the discussion for the future. Can't be easy for any of them, so let's hope that they're able to catch on elsewhere and continue their careers successfully.

*The other bit was that Sotorios Kyrgiakos' contract was extended a further 12 months, which is good in that it means there's cover in central defense, but it doesn't solve any of the problems in terms of building for the future. With Jamie Carragher on the downhill, Martin Skrtel's worrying inconsistencies, and Daniel Agger with unfortunately suspect long-term fitness, only Martin Kelly exists as some sort of option for seasons to come. Danny Wilson's likely somewhere in the plans, as is reserve captain Andre Wisdom, but there's clearly a need for Liverpool to strengthen at the back. Good for the Greek, but by no means a solution.

* We did the rumor mongering thing already, and there's been plenty since that post went up, with more Mata talk from Sid Lowe (thanks Khaine) that's guaranteed to make your metaphorical pants tighten. Or literal, if you're so inclined. What's more imminent, though, are the reports that Sylvain Marveaux has undergone a medical at Melwood and is due to sign on a free with the club. It feels like we've been talking about Marveaux for months; he was heavily linked during the January window but never arrived, and now it looks like something's actually moving forward.

I'm not very well-informed on the French midfielder beside the fact that he missed most of the 2010-2011 season with a groin injury. Back in April when there was talk of a pre-contract agreement we linked to this article, which provides a more detailed account of what we might be able to expect. Or you could just visit our earlier post, because that had a YouTube video, and I know that's what you're really looking for.

* Lastly, the fixture list for 2011-2012 was released a few hours ago, with Liverpool hosting Sunderland on August 13th to open the campaign and away to Swansea City on May 13th to wrap things up. A few of the big ones in the first half:

December's the busiest month with six league matches promised; the second half holds trips to both parts of Manchester as well as all three of the newly promoted sides. From a logistical standpoint, the lack of European football is going to make for some lean months, but the hope is that it leads to improved (and more consistent) performances in league. The only certain additions to the list will be Carling and FA Cup matches, which have typically come in September and January respectively over the past couple of seasons.

That's it for Friday's news---back later on if anything breaks, and for sure tomorrow morning with another weekend guest post. In the meantime, since you won't be ordering the new third kit, you can spend your money trying to upgrade your jetpack: