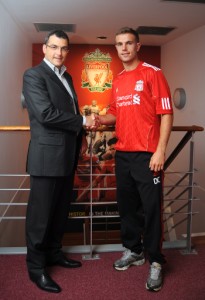 As if by divine intervention, my whining in the close of yesterday's post about Word Press being the spawn of Satan is met with immediate resolution---our admin servers are suddenly back to their former glory, which means that we're close to normal service. Even if, as Noel pointed out to me earlier, the front page is having trouble of letting go of things that happened four days ago and our tags ("Christian Purslow is Worse Than Hitler" et al.) are still nowhere to be seen.

What that means for you, as I noted between sobs yesterday, is that we're going to get going on the guest submissions that we've received so far. The plan right now is to run one per weekend, which will allow for plenty of time for your genius to reach the furthest reaches of the internet. We'll only interrupt if there's any major news to report, or if we get too embarrassed by positive reactions you're getting from readers that threatens to usurp us.

So there's that to look forward to, as well as Friday's news and notes:

* The Jordan Henderson deal has been finalized, with the clubs agreeing a fee somewhere around £20m, although there's a bit of debate about what's due now and what could be paid to Sunderland in add-ons and etceteras. Henderson arrived at Melwood the other day and has been making the rounds on the club's official website (wearing Damien Comolli's tracksuit, no less), and we've heard plenty about the diffciulty of leaving his boyhood club, his anticipation of playing alongside Steven Gerrard, and getting in front of the Kop.

One of the more interesting interviews around the transfer hasn't come from Henderson or Kenny Dalglish, though---Damien Comolli sat down to have a chat about both Henderson and the club's transfer strategy, and while it's not anything we couldn't have guessed at, it's interesting to get the Director of Football's take:

There is talk of us targeting the best young English talent this summer - is that the strategy?

Yes and no. It's not because a player is English and young that we are going to go for him. We go for a player because he ticks all the boxes. It's what we need at this time in this window. If a player is English or British or has played in the Premier League we'll look at that over someone who is abroad but it could be any nationality as long as they tick the boxes and is what we need for this window and going forward.

So whether you've followed news about young British talent with apprehension, anticipation, or, like Martin Samuel and Henry Winter, an unhealthy level of overpatriotic arousal, we get confirmation that there is a bit of prioritizing going on. Henderson apparently fits the bill, and we can guess that Phil Jones, Ashley Young, and Stewart Downing ticked a few boxes as well.

Whether or not Comolli's actually able to get the types of players that fill the need is going to be another question entirely; so far we've seen Young and Jones float in the direction of Old Trafford, and aside from the recent murmurs about increased interest in Gael Clichy, there's little news about positions in which it's obvious that bolstering is needed. And here's the spot where we talk about not panicking and the ridiculousness of the transfer window and justgoafterJuanMataalreadyyousonsofbitches.

* The early reports about the Jordan Henderson deal included David Ngog in some sort of swap, and while the final deal for Henderson went through without anything finalized for Ngog, it looks like the French striker is on his way out. Nothing from either club just yet, but Ben Smith, a consistenly reliable source of information, tweeted this earlier in the day:

#LFC and #SAFC have agreed a deal for N'gog. Player will discuss terms/do medical after his holiday.

Ngog's holiday is stateside, and there doesn't seem to be any rush to get back to finalize the deal, but there will evidently be some goodbyes to say for him in the near future. We'll probably have more to say once there's an official announcement, so for the time being I'll say that Ngog was always a likable player, and while he either didn't fulfill his potential or simply didn't have the chances to, I think we can all wish him well. He's one that you hope ends up getting consistent chances and takes them, as long as it's not against Liverpool.

That's it for today, and if you're wading into the transfer rumors any further, make sure to come up for air every once in awhile, or at least stop by to say hello to us on Twitter, where you'll at least get snarky skepticism to break things up. Odds are that if you express an opinion you'll be wrong, and if you talk about your like/dislike of a player you'll be accused of sympathizing with Hitler or, if it really gets serious, Roy Hodgson, Joe Cole, Christian Poulsen, or Paul Konchesky. Stay safe out there.

We'll be back tomorrow with the first of our guest submissions, and in the meantime, thanks to LFC80UK, you can can revel in the knowledge that Gary Neville is a complete shithouse at both defending and throwing a baseball: