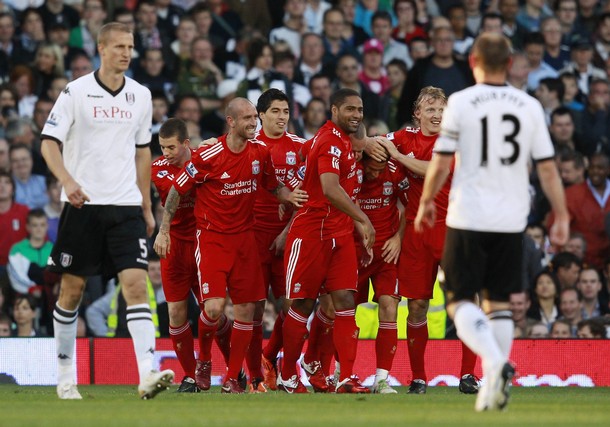 Jaw-dropping for most of the opening half, nervy for a good chunk of the second, but ultimately another high-level performance from Kenny Dalglish's Liverpool.

Pre-match the biggest story was the omission of Andy Carroll---not just from the starting eleven, where there was a chance that even if available, he would miss out due to the form of Maxi Rodriguez over the past few weeks. Carroll missed out on the squad completely and didn't make the trip with the team, which causes plenty of questions about his fitness for the run-in and, as others have mentioned, his plans for the summer. Insult to injury that David Ngog apparently picked up a knock over the past week, which left Liverpool's bench without a striker, and only Joe Cole and Jonjo Shelvey as attack-minded substitutes.

Carroll's absence made the team selection straightforward enough, with Kenny Dalglish able to call on the same eleven that beat Newcastle 3-0 last weekend and all but Jack Robinson from the side that beat Birmingham 5-0 a fortnight ago. The only real change was one that we got a preview of last week, with Glen Johnson moving back right and John Flanagan on the left, and the discussion about how Andy Carroll could fit into the eleven was put off for at least another week.

And it didn't take long to completely forget about those not in attendance, as Liverpool had the opener on 32 seconds. Lucas threaded a fine ball down the left that bounced free for Luis Suarez, and the Uruguayan glided down the wing and played one across the face of goal. It was eventually poked clear by Mark Schwarzer, but only as far as Maxi, who was settled just off the center of the penalty area. The Argentine's made few mistakes since rejoining the starting eleven against Birmingham, and he placed it perfectly through a number of bodies for Liverpool's first.

Then Liverpool got their second. And third. Inside of twenty minutes, Liverpool had pulled away through a combination of suffocating pressure and abysmal defending by Fulham. The second came via Maxi again, as he was the beneficiary of a floated cross from Glen Johnson on the right. Five goals in three matches for the midfielder, and minutes later Dirk Kuyt would extend his goalscoring streak to five matches after Mark Schwarzer failed to catch a low, dipping effort from just inside the area.

The rest of the first half was more of the same, with a few Fulham counter attacks breaking up forty-five minutes of Liverpool dominance. At times it looked as though Liverpool had a two-man advantage; the visitors pressed high up the pitch and in numbers, swarming any time Fulham had possession and negating nearly every forward movement from the hosts.

Fulham were able to scrape together a decent spell around the thirty-minute mark, but they saw their best chance cleared off the line by Glen Johnson after Clint Dempsey did well to fire a corner on goal. Liverpool saw off the threat and returned the match to normal service, closing down Fulham relentlessly and getting themselves into dangerous positions with seemingly every possession.

The second half started as a markedly different affair, however, with Mark Hughes opting to bring on Bobby Zamora for Simon Davies. The hosts show more impetus almost immediately, and they eventually got their reward with a fine effort from Moussa Dembele. Zamora held up play nicely for the Belgian international, who darted one past Pepe Reina at the far post. Their resurgence continued, and they very nearly had another before Liverpool were able to finally, thankfully, put the match away.

Maxi's third turned the match for good when it looked like Fulham could find a way back, and it came almost out of nothing. John Flanagan made a good run forward and laid it off for Maxi, who dribbled right a bit before deciding to unleash from range. The effort flew past Schwarzer into the top corner, giving Maxi his hat trick and snatching away any hope Fulham had of clawing back into it.

It would get better five minutes later, when an inch-perfect through ball from Jonjo Shelvey freed Luis Suarez on the right. Sublime footwork got him past Schwarzer, and he spun it in for another deserved reward for a match spent terrorizing Fulham's back line. From the nerves of the possibility of a Fulham second to completely out of reach in a heartbeat---another three points for Liverpool, five goals for the second time in three matches, and optimism at a fever pitch even after Steve Sidwell grabbed a second with a well-taken strike.

There's little that needs saying about the type of performance that Liverpool put together in the first half---they were simply dominant, and in the opening fifteen minutes it looked as though they were capable of scoring double digits on the day. Even the hoofing worked, as Fulham's back line proved themselves incapable of dealing with Luis Suarez, whose running and creativity wreaked havoc. The goals stopped for a bit, and Fulham could have made things very difficult, but Liverpool rebounded and eventually left no doubt.

It goes without saying that when Liverpool were at their best it was because of a cohesive effort from front to back; Glen Johnson was absolutely fantastic nearly all match long, getting forward at will (and creating the second) while still having one of his better defensive efforts of the season, and John Flanagan rarely looked out of place on the left. Slightly more concerning was the second-half wobbles from Jamie Carragher (making his 666th appearance for the club) and Martin Skrtel, who excelled early but struggled mightily when Zamora was introduced. Pepe Reina wasn't called into action on many occasions outside of Fulham's two taken chances, but was solid when needed and could do little on either goal.

The changing shape of the front six had little impact on their effectiveness, as Jay Spearing and Lucas continued to break up play and pace things along, setting the tempo for Liverpool's high-pressured approach. Maxi, Raul Meireles, and Dirk Kuyt were terrific in more advanced roles behind Luis Suarez---they all played at a high level, as did Jonjo Shelvey after coming on for an injured Raul Meireles. While Maxi got the hat trick, Suarez turned in another MOTM performance. He was on another level, running for what seemed like the entire match, darting past Fulham defenders at will, and finishing expertly for the fifth and final goal.

For most of the first part of the season, I couldn't wait for summer. I counted down the number of remaining matches and dreaded watching those that were left. Watching Liverpool play had become an exercise in self-harm. Now, the season couldn't go long enough. This Liverpool side and their manager have completely transformed our experience as supporters in a matter of months, and I want nothing more than for it to continue. It's a shame there's only two matches left.

Great start to the short week, and I can't wait for Sunday.