Things Should Start Happening Now and Other Tuesday Notes

Share All sharing options for: Things Should Start Happening Now and Other Tuesday Notes 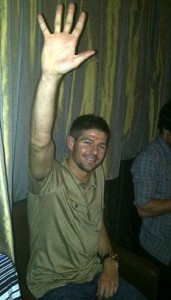 I guess it's not surprising that the influx of opposition supporters have stopped coming by to tell us how great their club is and how shit Liverpool is---it was a futile effort anyway, and I don't know that it ever really got off the ground, but the results of the weekend did more than enough to remind everyone that a) Barcelona are just that good, and b) Liverpool still stand alone as the most successful English club in European football.

Steven Gerrard also took it upon himself to help everyone remember over the weekend, and Paul McGrattan snapped the picture to the left as they celebrated the captain's 31st birthday. Gerrard and company had a nice night out on the town for the occasion, and better still that he appeared to come through relatively unscathed and no worse for the wear, and still had the wherewithal to raise five fingers in tribute to the day's events in London.

But by all means, please feel free to stop by and remind us that Liverpool aren't in Europe next season, or that everyone else that's cool is, because you're the first one to come up with that.

* There's actually some football on the immediate horizon today, with the Elite Round of matches getting underway at the UEFA U19 Championships. John Flanagan was ruled out through injury last week, but there are spots in the England squad for Jack Robinson, Andre Wisdom, Conor Coady, Thomas Ince, and Michael Ngoo.

Qualifying today started with Germany and Hungary, and England will face off with Montenegro later in the day. Before the round is over they'll play Spain and Switzerland in hopes of moving onto the finals in Romania, which will run from July 20th to August 1st. As of right now there's no listing for streams or ways to watch, but I'll try to update this space if there's anything watchable. Ahead of Friday's fresh round of senior Euro qualifiers, this is going to be as good as it gets, so wouldn't do any harm to try to catch Liverpool's youngsters playing in international competition. Just as long as it doesn't result in ridiculously high expectations created by a golden boot performance only to have a season of relative anonymity.

* For a few of the senior squad members the summer will hopefully involve less football and more rehab, and Daniel Agger is clearly one of those players. He struggled through another injury-riddled season, showing flashes of brilliance and composure interspersed with spells on the trainer's table. There's still plenty of goodwill remaining for the Danish defender; it's hard to have a discussion about him without gushing over the positive impact he can have on the squad when fit and pointing to your favorite picture from the win in early February at Stamford Bridge. Great to watch, but frustrating in that the act of watching him only takes place every so often.

That frustration isn't lost on Agger, though, and he spoke to the official site about his hopes for next season:

"The injury is coming along okay. It's been really hard the last few weeks, especially when I was on crutches, in a brace and couldn't move.

"I am definitely confident I can come back stronger. I know I say this every time, but I have really done everything this time to make every single muscle in my body stronger and I have done everything in the right way. If I could do something to make sure I wouldn't get injured again, I would do it no matter what it was.

"Of course, it's always frustrating to be injured, no matter if the team is playing well or poorly. There is nobody who is more frustrated than me, but I just have to focus and stay positive."

It's easy for us to talk about how maddening it is that he can't stay fit, but I'd guess it's entirely another thing when you're the one who's actually injured. The conversation about Agger gets more complex when we talk about summer plans, unfortunately, as the club can't build around him at the back as we once thought they could. If they're carrying his wages into the future, it's built around the hope that he's still got a few full seasons to play, but there's got to be other, more reliable plans made as well.

* And just because there's been "news" about each of them in the past few days, probably need to mention that Ashley Young, Gervinho, and Sylvain Marveaux have all had some sort of Liverpool-related discussion taking place.

For Young it's that his destination has shifted from Liverpool to United back to Liverpool again; for Gervinho it's that he's planning to make an announcement about his new club in the next week; for Marveaux it's that he's expecting to play in the Premier League next season but that doesn't mean it's Liverpool.

I hope we all learned nothing from that last paragraph other than that it's going to be a long, long summer, and I'm going to gnaw someone's arm off if we have to keep reading the same shit over and over again. Especially if I'm the one writing it.

Thanks again to all who chimed in on yesterday's season recap type post---it's genuinely flattering to have such positive things written about the work that we're doing, and we're obviously hopeful things continue this way on both ends. During such a trying time on the administrative end of things, it's been the great insight, humor, and discussion from all of you that's made this so fun to do.

Time for moving on into the summer, though, and Noel will be back tomorrow to lead us into the abyss. In the meantime, enjoy yourself as you lie in bed, smoking a cigarette and playing the violin: