Europa Might Be Better Than No Europa and Other Tuesday Notes 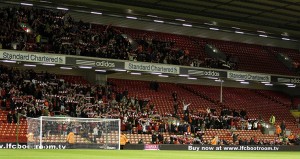 Today's a good day to get yourself immersed in something other than the Champions League, mostly because you've probably all heard about as much as you can take about El Clásico and Jose Mourinho and legal actions and just get the thing over with already.

But also because most of the Liverpool news focuses on Europa League qualification hopes. Segues, it's what we do, though not in this way.

* First up was Jamie Carragher, who's managed to find himself in the press roughly 38 times in the past few days. More relevant to the topic at hand is the vice-captain's thoughts about how the competition allows for inclusion of everyone in the squad (probably even Christian Poulsen):

"For me, it is another trophy to go for. I'd have loved to have been in [the Europa League final in] Dublin in a couple of weeks, that would have been fantastic for us and fantastic for the supporters. I'm not daft, I wouldn't expect us to play our full team – especially in the group stages – but it is great experience for young players to be involved in that kind of game."

And today we heard from Luis Suarez, who was markedly absent from Liverpool's knockout round matchups after arriving and apparently very much looking forward to the prospect of playing European football next season:

“It is the sort of competition you want to play in. It is our objective for the season. When I came that is what I wanted to help Liverpool achieve. It looked really difficult but we have kept winning and we have just had to hope that Tottenham dropped points. Now when they come here it will be the most important game of our season.

It's probably next to impossible that we'd ever hear anyone in Kenny Dalglish's squad pull a Franck Ribery or Arjen Robben and label the competition as "rubbish" or for it to "be better to not play in it at all," but it's not so far-fetched that Europa League ambitions have been tenuous at best. Not really a stretch to say that supporters are even more divided on the issue, and it's typically the same argument that more ability to focus on a title challenge and Champions League football for the 2012-2013 season. Also, that the Europa League is rubbish and it'd be better to not play in it at all.

I vacillate between not really caring if European football is on the cards for next season and thinking that it would be a monumental achievement, particularly after waking up in a post-Newcastle haze and mumbling to myself about how fifth place had magically landed on Liverpool's doorstep. What I don't vacillate between is thoughts of whether or not it's an affront to Liverpool's sensibilities to be seen partaking in such a disgraceful competition. Yes, I get that it's not the Champions League. But that doesn't mean that it's somehow below Liverpool to be seen with a Europa League patch on their sleeves come Thursday nights in the fall. It's one thing to talk about squad conservation and focus on league, but it's entirely another to get all arrogant and entitled about where Liverpool "should" be. If they finish fifth, they should be in the Europa League.

* Brief rant over, so let's talk about Glen Johnson liking smiles and Robbo and Flanno and Kells and puppies:

"Kenny has just brought the belief back, let the lads enjoy themselves and training has been good. The lads are happy day-to-day and look forward to the games. He's given us a bit of confidence and put a smile back on the lads' faces. We've got a great bunch of lads here. On and off the pitch we work hard for each other and off the pitch we're enjoying life with each other as well. It's a good group of boys."

"There is definitely a feeling in the dressing room that we can stay there. It bodes well for next season. With the confidence we've got now we'll try and finish the season strongly and start where we leave off next season."

Hit the jump for the full interview, including the quotes about Liverpool's young defenders. Worth repeating that Johnson's return to the squad was relatively seamless, as he proved to be influential both going forward and marking Jonas out of the match in the second half. He also made everyone who voted for Jack Robinson in last week's poll to see out the season (38%) look like dunces. The 31% that voted for Johnson to slide right back into the side can hold your heads high in the knowledge that you were among the few hundred that guessed better than another few hundred.

Other than more Alberto Aquilani will they, won't they with Juventus, that's it for a fairly lean news day. There is the aforementioned Champions League match to keep you entertained this afternoon and evening, which you can catch pretty much anywhere.

And, in the event that turns into more of a soap opera than a football match, there's always this: