How to Succeed in Attack Without Really Scoring

Share All sharing options for: How to Succeed in Attack Without Really Scoring 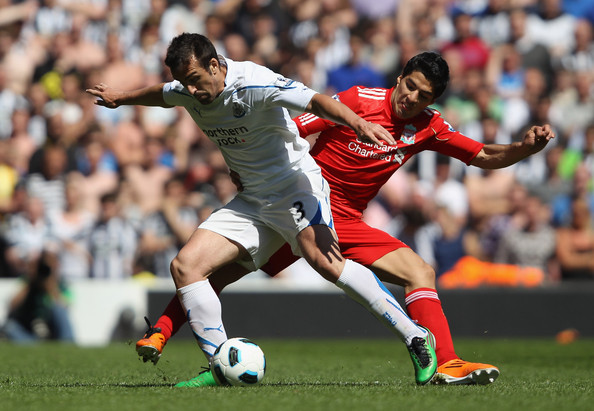 Statistically speaking, it had been a fairly long time since Luis Suarez scored for Liverpool. Six weeks, five matches, 12 goals for his teammates, and around 450-odd minutes. Not anything worthy of having its own website or requiring all of his teammates to pat his ass in the press for weeks on end, but a decent spell had come and gone since getting silly against Sunderland back in mid-March.

And yet, as I alluded to in Sunday's recap and DJ-Chutfield was quick to point out in the comments, it seemed like old hat when he calmly dispatched Dirk Kuyt's flick-on past a helpless Tim Krul for Liverpool's third and the goal that killed the match off.

Here's what DJ had to say on Sunday:

I think one very positive point is that a lot of people were unaware for Suarez's rather long goal drought, his last being against Sunderland mid-March. They were unaware simply because he's been the focal point of attack, racking up the assists and giving defenders nightmares for weeks after the final whistle. Even though the goals weren't coming, his effect on the side was 100% positive and was ever present in nearly all Liverpool attacks. Which is less than can be said for a certain Spanish tosser.

Endearing bitterness on that final note aside, it's a fantastic pick-out, and one that deserves a bit more discussion at the very least, especially considering that the near-MOTM performance of the Uruguayan on Sunday was mostly earned after scuffing and stumbling through a difficult opening forty-five minutes.

The time Suarez has spent with Liverpool has been all-action nearly from the start, netting less than twenty minutes after coming on against Stoke in his debut and running tirelessly against every midfield and back line he's faced. He's quickly earned a reputation as one of the hardest workers in a squad that's become increasingly defined by its workmanlike approach---there's little chance that he'll displace Dirk Kuyt or Lucas as the working class heroes, but the man absolutely eats up space on the pitch. 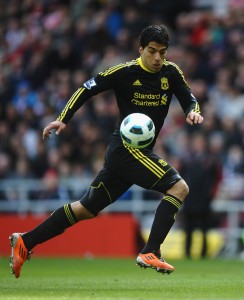 His success thus far isn't entirely down to work rate, but it's an easy sell that there's just as much effort involved as there is skill. We're all awed by the feints and body control, but his willingness to chase balls down, body up on defenders, and get himself into dangerous positions is just as impressive. He's showed the ability to beat a man any number of ways, and he's just as likely to race to the corner in pursuit or track back. Considering the shape of Liverpool's attack prior to his arrival, it's been nothing short of remarkable.

It's not as though his time thus far hasn't seen its share of struggles individually and collectively---his display for much of the match at the Emirates was marked by carelessness in possession and a hit-or-miss pairing with Andy Carroll that was mostly miss, and he's shown a tendency to find the turf a little too easily on a handful of occasions. There's also been the draw at Wigan and losses at West Ham and West Brom to dull the shine a bit, each of which saw Liverpool revert to a style of play that we'd all hoped had disappeared or good.

And it's not all down to Suarez, of course, as the rest of the squad has done their part in producing a more aesthetically pleasing and effective brand of football over the past few months. Nearly every Liverpool victory since his arrival has been more about the team than any one moment, even if he's already put together a not so bad highlight reel and been at the heart of some jaw-dropping moments. Liverpool's always been bigger than any one player, and their improvement over the past few months is more about the club than its individuals.

But it's impossible to go without highlighting the impact that Luis Suarez has had since becoming a regular in the first eleven, and even in a moderately extended string of matches in which he doesn't find the net. He's active, alive, and almost always threatening in possession, and he doesn't let up. The impact he's had in the early stages of his Liverpool career has been less about getting on the score sheet than it has about working his ass off the club for nearly every minute he's on the pitch, something Kenny Daglish noted after Sunday's victory:

""He is always getting in there and Luis is always a threat. It fell kindly for him in the box and he stroked it away, which is good for him. It was just reward for the work he put in. He's a good person. He's bubbly and just loves playing football. For the style he is, both as a player and a person, I don't think he'd find it difficult to fit in anywhere. That's great credit to him."

In a season this absurd---one in which we've seen more drama than any one club might experience in a decade---it's the good people, the ones that are willing to put the work in and love their football, that will end up seeing the club through the other side. For me, that's why the time between goals seemed so short, and it's a tribute to the way Suarez has aligned himself with the club.