Xabi Alonso Won't Let You Quit Him and Other Thursday Notes

Share All sharing options for: Xabi Alonso Won't Let You Quit Him and Other Thursday Notes 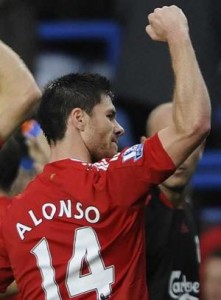 Yesterday was a nice day. We were able to put the painful memories of bad losses behind us with a perverse sort of poll-focused celebration while also harkening back to the glorious triumphs of Istanbul. We didn't pay much attention to any of the individuals involved in either category, because it was a time for condemnation and rejoice of the collective. Liverpool have won and last as a team this season, and the effort in Istanbul was as good as it gets when you're talking about everyone working for the same cause. And better still, there were no seductive ginger beards involved.

Those days have passed.

* I have a curious tendency to both loathe and love Xabi Alonso---I cringe when I read that he's again doing something associated with Liverpool, but it's only because I loved him while he was with the club, hated the fact that he left, and continue to be absolutely enamored with him and his beautiful beard. So it's particularly painful when the official site trumpets their world exclusive as having unbelievably emotional insights about his Liverpool tenure and his passion for the club and holy shit I'm going to pass out. Anyway, some quotes:

On the reasons for his exit:

"At the end of that season, speaking to Rafa, he told me the situation and that he wanted to sign other players and I could be one of the replacements. If an offer would have come, probably I would have been sold. That's when I told myself that the situation had changed - from being a very important player to being one of those who can be sold to get funds to sign other players. I accepted it because I am a professional but you have to realise what your situation is. At the end nothing happened because there was no agreement and we started my last season in Liverpool, but knowing what had happened."

On the Champions League final in 2005:

"It was a crazy night because we were so enthusiastic before the game but the first half was really tough and really difficult to take, but the team spirit was high and we kept believing, even when it was mission impossible. But we made it and in six minutes scored three goals against a top team like Milan with so much experience. It was a miracle. After scoring the third goal you had the feeling our name was written on the trophy. Look at the pictures and my face tells everything before taking that penalty. The responsibility, the tense look. It was more than nerves, it was about the responsibility. It was one of the biggest moments of my career. I missed it but got the reward and it was probably the quickest five metres I have ever run."

Apparently there's even more to come, which, depending on your blood pressure, could be either a blessing or a curse. As I mentioned, it's a little bittersweet every time he speaks about the club, since he's clearly still passionate about Liverpool but also very clear about the feeling that he was no longer wanted. For all Rafa Benitez's faults (the number of which vary depending on which camp you're in), the alienation of Xabi Alonso will go down as one of the worst. Sad that Liverpool lost a footballer of his caliber, but even worse that they lost someone who felt so strongly about the club.

* From one former Liverpool midfielder to another, except this one's got decidedly less good-looking facial hair and an objectively shorter neck. Danny Murphy, who's really cool except when he's talking about the evils of foreign players at Liverpool or the reasons that Roy Hodgson is the right man for Liverpool no just kidding, Kenny Dalglish is the right man for Liverpool, but there's no pressure, and...wait, what was I saying about him being really cool?

"He [Murphy] should know there is always pressure here. He played here long enough, didn't he? I just know that we played fantastic that night against Fulham and so does he. There's always a caveat in there somewhere, isn't there? There's always somebody that asks a question. But if you take any pride in your work, you are under pressure in any walk of life. It's not just exclusive to football. You worry about their ability to play first, and I'm sure the players can handle anything else that comes with it."

I think the bitterness in the statement is something I've injected myself, but it's an idea that we discussed a few weeks ago, and in hindsight I think it was Murphy's comments that got me all up in arms about the "Liverpool have no pressure" argument. There's no sense in rehashing it now, as Dalglish's comments put it far better than I did or would be able to. But I will say that I'm fine with Danny Murphy taking a break from his armchair analysis of Liverpool, at least as long as his opinions about what's "right" for Liverpool are so...varied.

That's it for the morning, but we'll be back with more later this afternoon. Reminder that more poll results are posted today, so keep an eye on Anfield Asylum, Paisley Gates, and Oh You Beauty for that. And for everything else, of course.