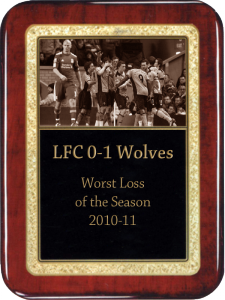 Along with Flop of the Season, the results of which will run tomorrow afternoon on Paisley Gates, Worst Loss represents what seems like something of a bygone era of the 2010-2011 season. Like those least impressive on an individual basis, none of the nominees here had anything to do with the second half of the season and are best left banished to the corners of your mind where you keep the memories of your failed attempts at combining hip hop and exercise. And as it turns out, this one's just as much a testament to the impressive second half turnaround as it is a damning indictment of the way things were during the season's first five months.

All were tough to take, and while it was fairly unanimous from the readers' point of view, with the 0-1 result against Wolves at Anfield running away with things, our collection of bloggers and guest editors went in a few different directions. The 0-2 loss at Everton was the majority rule on that end, but this season was rife with opportunities to discuss which bad loss was the baddest:

Liverpool 0-2 Everton (a): Dark days. Losing to Everton is one thing. Handing it to them on a plate is another. No belief, no fight, no idea. A bit like Hodgson. Best performance of the season (as he later claimed)? Do me a favour, love. One of Britain's finest journalists (who shall remain nameless) once said to me that the Werthers-wielding dogfight specialist is a ringer for Alan Partridge's secretary, Lynn. Even she could have come up with a better gameplan for Goodison than Hodgson did that day.

Liverpool 0-2 Everton (a): If losing to United stings, then losing to Everton is downright painful. No one on Merseyside believed in the rapture was coming this weekend because it passed us by earlier in the year. A pitiful performance in front of the new owners saw us establish roots in the relegation zone and chants of “Your Going Down” echo around Goodison Park. This particular 2-0 loss proved that Roy Hodgson had no need for a Plan B because Plan A still wasn’t even in the works. Absolute and total clown shoes.

Liverpool 0-3 City (a): Losing to Moyes and his listless, inconsistent squad is never easy to swallow, but the resounding defeat at City clearly defined how difficult this season was going to be, despite it being mere days old. We've come an awfully long way since, but to see our already-fragile egos decimated by a hungrier, more determined squad and their untold billions in cash reserves was the very definition of dispiriting. Mercifully, we reversed the scoreline in the return fixture thanks to Andy Carroll's frighteningly dominant performance up top, but City's emergence as a force that must be taken seriously makes the impending battle for Champions League football in 2011-12 seem that much more difficult.

nate of Oh You Beauty:

Liverpool 0-2 Everton (a): Every loss to Everton is the worst loss ever. Lying down in pathetic submission as a mediocre Blues side skipped gleefully to victory made it even worse. Having the Liverpool manager say "that was as good as we have played all season, and I have no qualms with the performance whatsoever" after the match made me want to curl up in the bathtub with Elliott Smith's Needle in the Hay and a dull safety razor.

Liverpool 0-1 Wolves (h): Of course losing to the blueshite at Goodison sucks, but we've seen that before. But being beaten at home by Wolves? Only if you saw the Doors live.

Mike of Avoiding the Drop:

Liverpool 0-2 Everton (a, and with an asterisk): I voted for Everton but only because the Northampton Town loss was not a choice. Losing at Anfield to a team sixty nine spots below us, and I believe third bottom from all league teams at the time, should have been the nail in the coffin for Roy. The loss typified his horrid hoofing approach to the game. Remember that this was the game in which during the buildup Agger said he was not willing to play Roy's stagnant cautious style. He showed he was right with setting up Jovanovic's opener with a beautiful through-ball, which showed what everyone already knew: Roy's style was getting this team nowhere. Naming a squad without one senior player on the bench was a tad cocky for a manager who was sitting three spots clear of the drop at the time, his confidence should not have been as high as to take NTFC so lightly considering Liverpool's horrid performance in the Carling Cup the past few seasons. In a final example of Roy's stubbornness, he waited far too long to make the chance the game was crying out for: bringing on Shelvey. Right after he comes on he provides the corner for Ngog's equalizer. The decisions and tactics that seemed obvious were the ones that made the difference, and they were the ones Roy resisted. It was clear then he was not the right man, and while firing him that early would have "not been the Liverpool way," getting embarrassed at home by the bottom of League Two is certainly not the Liverpool way either. He had to go right then.

Below is a pie chart of the polling results compiled by nate, who will be running the results of the Best Win over at Oh You Beauty later this afternoon. Thanks again to all the readers, bloggers, and guest editors for taking part, and there's more to come over the next two days as we reveal the results. 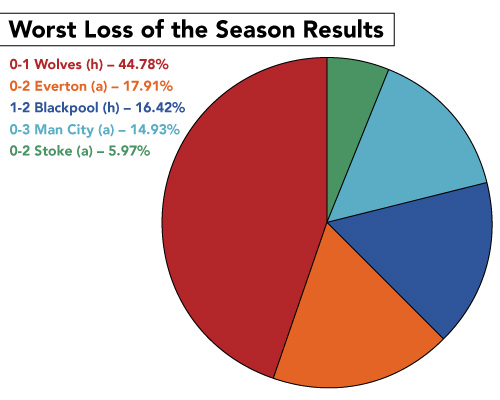 And the other results posts thus far: