Share All sharing options for: Aston Villa 1, Liverpool 0: An Indifferent Sort of Ending 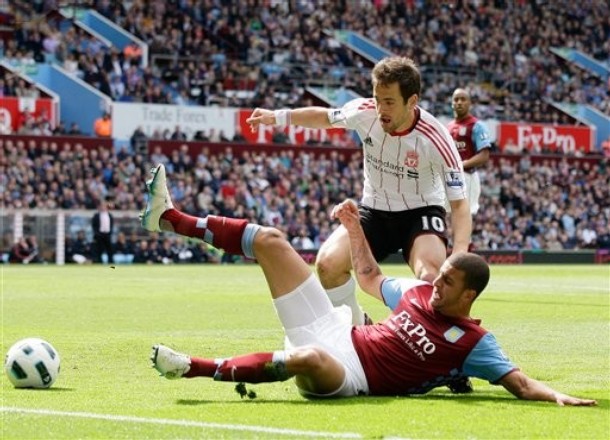 Liverpool fall to Villa in the final match of a rollercoaster season.

For the time being, I'm going to leave this as an open thread, as I missed almost all of the first half and was interrupted for large spells of the second. From what I hear there wasn't much to recap anyhow, with few chances for either side and a pace dictated by the fact that neither side looked like they could be bothered to do much. Stuart Downing's goal changed that a bit, and Liverpool were much better as the match continued, but it was a largely disappointing end to a season that saw a fair share of disappointments.

So it's a bitter end to the season, but it also sees the club in a much better standing than they were at the beginning. Hellish at times, this season has provided plenty for Liverpool to endure. To finish in sixth is some sort of a achievement in and of itself; there's no celebrations to be had for moral victories, especially after today's limp performance, but it's undeniable that Liverpool have achieved something massive in terms of sentiment.

Feel free to discuss anything and everything below---the match did provide a few talking points, including Joe Cole's first (and last?) start in months to little effect, a full 90 for Fabio Aurelio, Raul Meireles getting back into the eleven, some difficulties up front for the lonely-looking Luis Suarez, and, unfortunately, another shaky performance to end the season on a low note. And, of course, there's plenty to talk about heading into next season, which we'll launch into over the coming days and weeks.

We'll have a more fitting recap for the season this week coming in the form of the poll results and discussion that Noel organized; in the meantime, keep each other company and let that image of Joe Cole getting dispossessed burn into your brain while you hope that someone is foolish enough to take him off Liverpool's hands.